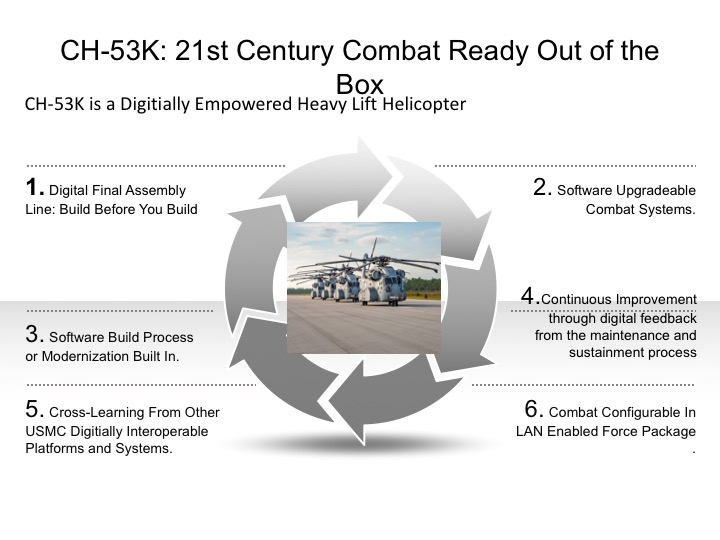 The CH-53k will replace the CH-53E. It will be the premier heavy lift helicopter.  It has a number of key performance characteristics which make it a significant upgrade over the CH-53E, notably, an ability to carry three times of the external load of the CH-53E.

There are a number of key enhancements of the K over the E understood as a platform.  Certainly important, the overall impact of the new aircraft would be missed unless, its coming to the MAGTF is not understood in the context of the transformation of the MAGTF itself.

Put in other words, the CH-53K is entering USMC operations when those operations are being fundamentally reworked to operate in a new strategic context and in the context of fundamental change for the MAGTF itself.

There is a strategic shift underway from the primary focus on counter-insurgency to crisis management in contested operational environments against peer adversaries.  The experience of the counter-insurgency years has little relevance to how to generate forces which can prevail in a force-on-force conflict and notably to be central to how to ciris manage in such situations.

The Marine Corps clearly gets this point.

My recent visit to MAWTS-1 and to discuss their recent work during their WTI exercise underscores the transition.  Across the board, the Marines are working the challenge of operating in a force-on-force contested environment.

There is little time to lose in making the transition and learning the appropriate skill sets.  And the Marines are looking to leverage new capabilities to enhance their transition as well.  As noted in a recent article on WT1 2-18 by Steve Valinksi, “a major focus in the past two WTI iterations has been Digital Interoperability (DI) which is an integral component of the Marine Corps goal of having every airframe capable of being a sensor, shooter and sharer.  ‘DI continues to be a major focus throughout flight phase. Multiple Assault Support T/M/S are able to increase their SA through rapid information sharing, Major Miller told APD.”

The CH-53k is built from the ground up to be a DI aircraft and will be inserted into a Marine Corps which is being transformed by the crafting and evolution of DI and reshaping of the distributed combat force.

The shift from legacy to a 21stcentury system characterizes the movement from legacy heavy lift helicopters, like the Chinook or the CH-53E to the CH-53K.  The CH-53K as a fly-by-wire aircraft is built around digital systems. In effect, modernization is built into to the architecture, which allows for upgrades through a software evolution process, one informed by the operational experience of the combat force and that learning then informing the code rewrite process.

The manufacturer can make a lot of changes along the way and given the different layers of flight control authority which is built into the architecture they can provide options for the pilots as well that allow them to mission managers or flight controllers dependent on where they are in the mission.  And these capabilities evolve over time along with the software upgrades and changes.

When I visited the West Palm Beach facility last year of Sikorsky, I saw this digital migration process underway through the software modernization dynamic.

As one engineer commented:” As you saw, the ground test vehicle is a fully functional K but it simply does not do one thing – which is to fly.  As you saw during the testing and training going on, the aircraft was working through a lift cycle but on the ground.

“The ground test vehicle and the Engineering Demonstration Models or EDMs are key platforms, which enable testing of the block upgrades within the program itself.

“They are not prototypes.

“These aircraft have had every single upgrade along the way.  This means that the first four EDMs will be able to be used by the government to continue to the ongoing software development effort, which will then inform the modernization of the operational aircraft.”

“This is a very different process from how the Es were designed and modernized for sure.”

This means that the DI capabilities of the K, combined with software upgradeability built into the aircraft allows the K to evolve along with the transformation of the MAGTF as a DI force as well as to be a key contributor to the process.

I will deal with additional aspects of the coming of the CH-53k and its intersection with USMC transformation in a later article.