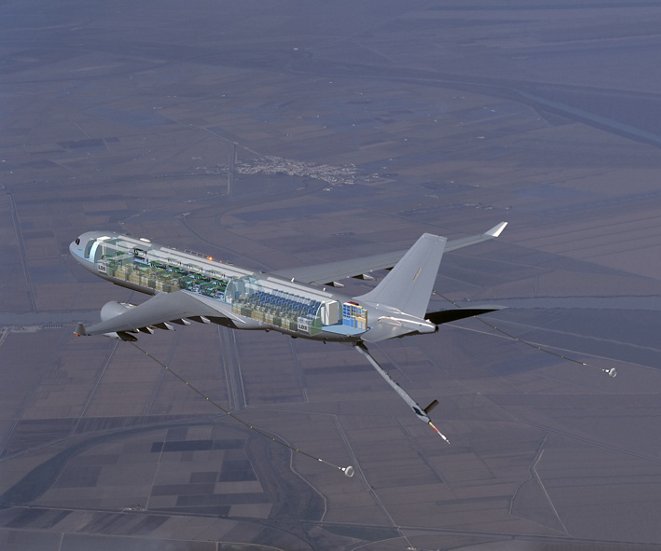 The Australian Air Force was the launch customer for the Airbus A330MRTT.

But it was developed as well for the anticipated demands for the US Air Force.

In a competition in which the plane was chosen initially by the USAF, but then altered by still controversial dynamics within the US procurement process, the plane has gone on to become a global tanker.

Ironically, because it was clearly chosen as the tanker of choice for the USAF and was developed to meet to the global deployment needs of that Air Force, the program has been very successful in being delivered and deployed worldwide to allied air forces who recognized the capabilities of the new tanker.

Currently, there have been 57 orders for the aircraft with 29 delivered and in operation.

There are eight air forces worldwide which have become customers of the multi-role aircraft, with a primary focus on tanking.

The aircraft is a very flexible platform, which allows customers to tank with the fuel inside its wings but transport passengers and kit required for an operation.

The RAAF, the aircraft’s launch customer, has used the aircraft regularly for global reach, and interviews with the RAAF over the years have laid out the evolving capabilities of the tanker as well.

The platform can be looked at several different ways.

It can be looked at in terms of its primary mission, tanking.

According to Airbus Defence and Space, that mission is described as follows:

The A330 MRTT is the most effective tanker based on its unmatched fuel capacity that allows it to offload more fuel at any given distance than any competitor. More fuel on-board means more flexibility, more range and longer time on station.

This enormous fuel capacity allows the A330 MRTT to act as a force multiplier, thus, improving the efficiency and effectiveness of fast jets operations.

To refuel receptacle-equipped aircraft such as the F-16 Fighting Falcon, F-35A Lightning II, or even the A330 MRTT itself (when fitted with an UARRSI), the A330 MRTT is provided with the advanced Airbus Defence & Space Aerial Refuelling Boom System (ARBS).

Its fast fuel flow rate (up to a maximum of 3600 kg/min – 1200 US gal/min) makes the ARBS the most capable new generation flight proven Boom available.

Excellent handling qualities are provided for the operation of the ARBS, rated as such by independent assessments.

The Cobham 905E  Under-Wing Pods, currently in service and proven in operation, enable the A330 MRTT to refuel any NATO or allied Probe-equipped receivers such as the Eurofighter, the  Tornado, the Jaguar, the F/A18 Hornet or the Sukhoi 30.

The A330 MRTT physical compatibility with receivers across the world is established, demonstrated and certified to allow coalition interoperability.

The FRU, a removable Hose and Drogue unit, allows refuelling receivers with a different fuel type. This option assures NATO fuel type to be transferred from Wing-Pods, while an alternative fuel type is dispensed from the FRU.

Those Air-to-Air Refuelling (AAR) systems are controlled from an advanced Fuel Operator Console that is positioned in the cockpit, increasing the safety of the AAR operation by ensuring a timely and synchronized reaction of the flight crew to unexpected events.

It can be looked at as a combat enabler in which force packages can deploy to the area of interest with passengers inside the A330MRTT and fuel inside the wings.

From this perspective, it is accompanied in a task force arrangment with an airlifter carrying equipment for the task force and with fighter aircraft providing the tip of the spear and with multi-mission aircraft, such as the Wedgetail, to provide for management of the task force.

Airbus Defence and Space described that aspect in part by characterizing it as a multi-role strategic transport with global reach.

With its true wide-body fuselage, the A330 MRTT is ideal to carry any kind of military or humanitarian payload on strategic missions.

Furnished with an attractively modern design, the cabin is conceived to ensure optimum seating configurations in every class, maximising capacity and providing airline comfort. These features enable a complete range of configurations, from pure passenger and troop transport to the complex customization required for VIP guests. For example, it can accommodate 266 passengers in a typical two class’s configuration, or some 300 in a single class layout.

The A330 MRTT is capable of carrying a payload of up to 45 tonnes / 99,000 lb. The versatility of the A330 MRTT enables cargo to be conveniently stored within the lower deck in a variety of cargo options covering the full range of existing under floor cargo containers and pallets, ranging from the LD1 to LD3 and LD6, as well as the standard 88×108 inch 463-L NATO military pallets. Some of the cargo can also be carried as non-palletised “bulk”.

The A330 MRTT is also an outstanding strategic aeromedical evacuation (MedEvac) aircraft. Its large fuselage permits maximum flexibility for up to 130 NATO stretchers to be carried over intercontinental distances. In a ‘light medevac’ configuration, medical beds can be installed above designated fold-down seats.

This allows the aircraft to be used as a troop transport on an outbound relief mission, with medical beds stowed in the lower cargo compartments, and then rapidly converted for MedEvac on the return. In an ‘Intensive MedEvac’ configuration, critical care modules can be installed to replicate an intensive care unit in the air. The aircraft could typically carry 28 NATO stretchers, up to six critical care modules, 20 seats for medical staff, and 100 passenger seats.

It can be looked at from a fleet perspective both in terms of a fleet of aircraft operated by a particular nation, or more interestingly, as part of a global fleet of allied aircraft.

Because the aircraft has been flying for several years with the RAAF and now by several other air forces, there are growing considerations with regard to shaping fleet commonality to ensure more effective cross investments and cross operations across an allied combat fleet.

We have done a number of interviews with A330MRTT users along these lines and will include these in our featured defense systems focused on this aircraft.

And finally, the A330MRTT can be seen as evolving with the changes in the approach of core customers to operating in the integrated combat space.

From this perspective, how can the aircraft be fitted differently to provide for the functions of the combat aircraft with which it operates?

How will the role of tanking itself evolve as the focus on contested airspace becomes more significant to a number of air forces?

The operators of the A330MRTT, led by those in the RAAF, have several years of operation already under their belt.

And they are leveraging this learning as evolve the role of the aircraft within ongoing change for 21stcentury concepts of operations.

This dossier about the A330MRTT is the second featured defense system, the first being the CH-53K.

In this dossier, we will highlight the journey of the A330MRTT and pathways to future adaptations and initiatives.