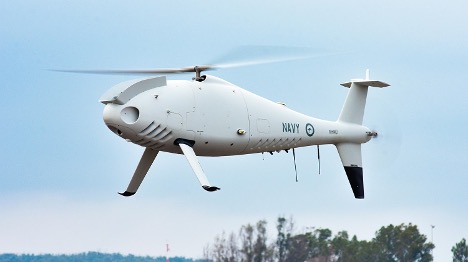 Schiebel has announced it has successfully completed acceptance testing of a heavy fuel engine on its Camcopter S-100 UAS currently being tested for the Royal Australian Navy.

Designed to be compatible with heavy fuels already carried at sea for marine and helicopter gas turbines, the adoption and successful testing of the heavy fuel-powered S2 engine on the S-100 will negate the requirement to carry dedicated aviation fuel in separate bunkerage.

Initially JP-5 (F-44) and Jet-A1 fuels have been cleared, while other fuel types are planned to be approved in future. Significantly, Schiebel says the new S2 engine increases the operational performance and maintainability of the S-100.

“Given the single fuel policy adopted by the world’s Navies, we have responded to the requirement and have now developed, tested and produced our own Schiebel-designed heavy fuel engine for the S-100 system,” Hans Georg Schiebel, Chairman of the Schiebel Group said in a statement. We are thrilled to have successfully completed the acceptance activities of the new capability for the Royal Australian Navy.”

The S-100 is being trialled by the RAN as it seeks to develop the requirements for its Project SEA 129 Phase 5 unmanned system that will be embarked aboard the new SEA 1180 Arafura class offshore patrol vessels from 2024.