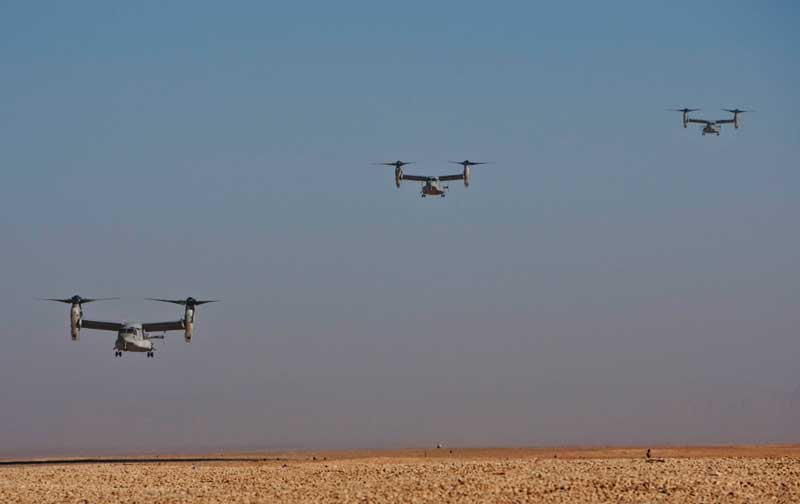 This is the second in this series of insights into the brith of the Osprey Nation.

Lieutenant-Colonel Garcia discussed his time in Iraq and Afghanistan involving both rotorcraft and the Osprey.

The tiltrotor craft was used differently in the two countries due to mission differences and geographic differences.

In the next posting, Lieutenant-Colonel Garcia describes the challenges of shaping a more effective maintenance regime for the Osprey. Here he describes the operational experiences.

SLD: Could you describe your involvement in the Iraq and Afghani operations?

Lieutenant-Colonel Garcia: I was the maintenance officer for the VMM-261 during the Afghanistan deployment.

I did the first deployment overall with VMM-263 in Iraq.

I’ve been in the program since prior to the operational evaluation at VMX-22, so I’ve been flying for about six-and-a-half years.

Before we get into the maintenance piece of it, I’ll talk a little bit about the aircraft and kind of how it operated in the theater.

SLD: Could you talk to your experiences in Iraq and Afghanistan with the aircraft?

Lieutenant-Colonel Garcia: The aircraft self deployed off of the ship.

We flew into Al-Asad on one day, spent the night.

The next day from Al-Asad, we got into Bastion with only single air refueling required with some internal tanks.

This aircraft doesn’t have the capability to be broken down and put inside a C5 like the helicopters can.

However, it does have the capability to be able to deploy itself.

There are still some challenges in that with the icing protection and some related issues.

But assuming that the weather is good enough, you have support from the KC-130 for fuel.

You can pretty much get anywhere that you need to.

With internal tanks, you can go for long distances, too.

It was designed to go from the coast of California out to Hawaii without any external support.

SLD: The refueling system, is it a probe?

Lieutenant-Colonel Garcia: For aerial refueling, there is a probe.

The newer models have the retractable probe, so it extends and then it comes back.

We also have three tanks that fit inside the aircraft, increase our range considerably.

SLD: How did you use the range of the aircraft?

Lieutenant-Colonel Garcia: Once we were in theater, we got to do some longer-range missions as far as Kabul, Camp Clark, out to Zaran in the west and then down to the south towards the Pakistani border.

These flights supported VIPs a lot of times, and the movement of high-level personnel.

We went out to Kabul to pick up the Chairman of the Joint Chief of Staff. I led a division of four aircrafts to go do that.

However, going to land in a single-ship zone it will land vertically. C-130 didn’t have the capability to do that, so that’s the flexibility that we bring.

The majority of the missions required were just local and fairly close in within the Helmand province or a little bit to the west of that. That’s where we primarily operated.

We operated there largely in helicopter distances where our speed doesn’t really help us just because of the small distances that we’re going.

What the aircraft provides that the helicopter cannot is the ability to go high.

We typically flew between 9,000 and 10,000 feet to get away from the ground threats; whereas, most of the helicopters flying were lower than that.

So they are more in threat from ground fire.

SLD: I would assume that the roles in Iraq and Afghanistan are different because the missions are different given USMC deployments?

A part of the issue also is just the way the forces are structured in Afghanistan.

In Iraq, it was a lot more integrated.

We pretty much operated throughout the entire country.

Whereas in Afghanistan, the Marine Corps is pretty much limited to Helmand, south there and out to the west.

You have a very large Army presence in Kandahar and along with the other coalition nations.

It’s broken up much more piecemeal and there’s very little crossing at those borders.

SLD: It’s more of a honeycomb where you have a cell?

And each theater has sufficient assets to support that theater.

So there’s less need for us to go outside of there.

That’s kind of what limits us to those small areas. And the rugged environment puts a lot of stress especially on dynamic components.

The environment in Iraq was challenging, Afghanistan is just as much, if not more so, because of higher altitudes.

We could carry less weight.

So we generally took less fuel since we didn’t have to go as far and we could carry comparable weights as we did in Iraq.

But the sand is very corrosive to the engines and to a lot of the components.

We have different types of aircrafts there.

We did have the skids there, the Hueys and Cobras.

They operated throughout the entire area.

The Deltas towards the summer were almost entirely ineffective during the day just because of the heat and the higher elevations.

So that’s kind of the niche that we fit into there. SLD: Could you describe that niche?

Well, everything has gone heavier now.

Medium lift is not medium lift the way it was in Vietnam.

So now, that is the niche that we fill.

We’ve got CH-53Es that carried the heavier weights that did most of the external carrying, most of the cargo carrying ,and we had the opportunity to carry a lot of the personnel to move them very quickly.

Some of the more important roles that we played other than just moving people and things around the theater were supporting local governance, moving a lot of the governors or all the local folks from one place to another.

SLD: Presumably as we start the drawdown within Afghanistan, the Osprey will move much throughout the theater and provide a significant transition tool as the US Army draws down its forces.

Lieutenant-Colonel Garcia: Good point; we have our cell now but the mission can change.

SLD: What is the reaction of folks when they prepare to fly in an Osprey the first time?

Lieutenant-Colonel Garcia: The first time for the U.S. forces and coalition forces, you had some people who almost refused to get in.

You hear the press and how bad they are, although you know nothing has happened for years.

But once they’re in it, they really get to see how comfortable it is.

Going 80 miles doesn’t take them 45 minutes to an hour in the back of a helicopter.

It’s a lot cooler in the back of the aircraft.

It’s a lot more comfortable, a lot quieter: got a lot of converts very quickly.

With many Marines, you would get hooting and hollering in the back from them enjoying the ride: you’d think you’re on a roller coaster!

But that is also the aircraft of choice for VIPs whether it is our own generals, politicians, or the Afghans or coalition members: they get to fly them around a lot.

SLD: How many aircraft did you have?

Lieutenant-Colonel Garcia: We started off with ten.

Then we got two more around February, I believe late January or February.

Now we have twelve aircrafts.

We generally operated about ten of those aircraft on a regular basis.

Usually, one of them was in phase maintenance, i.e. scheduled maintenance at 210 hours of flight hours.

The other aircraft is generally in the down status for extended period of time due to cannibalization, because the supply system is in process of development.

The featured photo shows Ospreys Landing at Camp Bastion After “Self-Deploying” Off of Amphib (Credit: USMC)