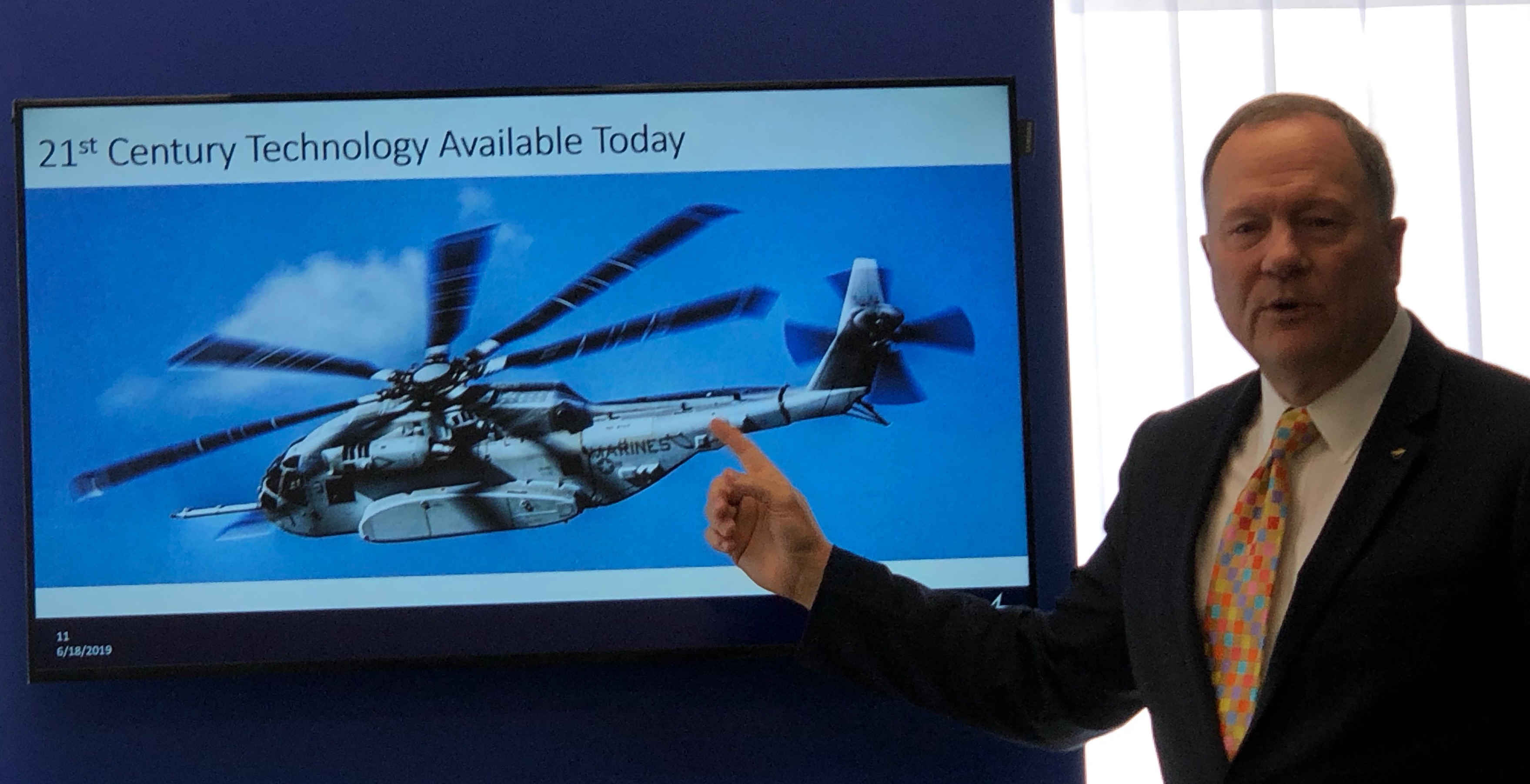 Here is a roundup of rotary wing aviation news from the 2019 Paris Air Show, which took place from 17 to 23 June at Le Bourget, France.

Sikorsky’s International Capture Manager for the CH-53K (Beth Parcella) declared on 18 June that a number of governments were interested in acquiring the aircraft, especially since the US Navy’s secretary gave an approval for international pilots which shall be effective in the coming months.

Also dubbed the ‘King Stallion’, the CH-53K is already in production for the Marine Corps where it shall replace up to 200 old CH-53Es. Israel and Germany have so far both expressed their interest publicly for the aircraft, although it is expected to compete with Boeing’s CH-47F.

Bell has declined to make detailed comments regarding the certification testing on its 525 Relentless super-medium-twin, notably refusing to provide a timeline for a milestone previously scheduled by year end. Speaking at the show, Bell chief executive Mitch Snyder said that while a specific date is “kind of interesting”, the manufacturer was “focused on the process right now”.

According to Flight Global, this could indicate a further delay for the 525, which was originally scheduled to arrive in the 2015-2016 timeframe. Mr Snyder stated in the meantime that the 525 is likely to enter service in an offshore transport configuration “but VIP could be first as well”.

Bell has also proposed to use the technological base of the 525 as a platform for its proposal to the US Army of its Future Attack Reconnaissance Aircraft (FARA) program. The decision to pitch a conventional helicopter, rather than tiltrotor or compound aircraft, for the competition seems puzzling given the army’s cruise speed requirement of 200kt (370km/h).

Answering those concerns, Mr Snyder declared “We believe that we are going to meet the army’s requirements with a conventional helicopter based on our analysis. […]When we say leveraging it doesn’t mean we will pick up that exact aircraft – it’s the technology we are using.”

Russian Helicopters presented on static display a modernized version of its Ansat light helicopter. Equipped with a full screen cockpit with new avionics, the aircraft also has a weather radar, a ground proximity warning module, a crash-resistant fuel tank in case of impact with the ground, a cable cutter and LED lighting. Also the number of passengers will be increased to 8 people and the range increased by 30% thanks to the use of lighter composite materials. Alexey Garipov from Kazan Helicopters (subsidiary of Russian Helicopters) stated that the new version should be available for offer by 2020. Following a typical Russian emphasis on solidity, the aircraft will be able to be stored outside hangars and to operate in extreme temperatures (from -45°c to +50°c).

Helicopter service provider Wiking (Germany) specialized in offshore transport signed on 19 June a $30mn contract with Leonardo for two AW139s. Deliveries are expected between 2019 and 2020, adding to Wiking’s four already owned AW139s. Over 1100 of such aircraft have been ordered to date according to Leonardo. Additionally, five more AW139 will be delivered to Italy’s Vigili del Fuoco (Firefighting) following an order estimated at $83mn. Deliveries are due in June 2020 and are part of an effort to replace decades-old Agusta-Bell AB412s.

Another main attraction from Airbus was obviously the oncoming ‘Hélicoptère Interarmées Léger’ (HIL) also more commonly referred to as the ‘Guepard’, a vehicle destined to replace five older aircraft types currently in service with the French Armed Forces (incl. Alouette, Fennec and Dauphins…). Designed for versatile use, the new platform will reportedly be able to perform a number of tasks from reconnaissance to close air support along with maritime support and research missions.

Derived from the H 160M, the Guepard will similarly feature curved blades enabling to reduce its noise by half compared to Tigers currently in use. The Guepard is also equipped with two Arrano engines from Safran Helicopter and an ICDS (Interactive Cockpit Display System) avionics from Thales and will be able to take two pilots and five fighters with him.

A total of 169 Guepard have been ordered so far, including 80 for land forces, 49 for the Navy and 40 for the Air Force, while export potential is estimated at 400 aircraft according to the French MoD. First deliveries are expected to happen by 2026 after being initially planned for 2028. From the very first day of the exposition the manufacturer also displayed a mock-up of its oncoming remote carrier designed to integrate the FCAS program, although specific details are lacking so far.

Airbus, ADP (Paris Airports) and RATP (Transport) announced on 18 June a partnership aiming to enable VTOL flights for the 2024 Paris Olympics. The project intends to develop a complete system, including aircraft design and production, low-level traffic management, infrastructure (“vertiports”) and maintenance. Due to complex legislation the city of Paris itself would be not be included in the fly zone, and average flight cost is estimated between 1 and 2 euros per km for the customer (30 to 60€ for the whole travel).

“It’s a long-haul race, and a huge technological challenge,” said Guillaume Faury, Airbus’ CEO, on that occasion. “There are many such projects in the world, but few have the credibility of the team we are assembling”. According to specialized reporter Vincent Lamigeon, Airbus’ Vahana model, an air-taxi prototype, could possibly serve as a platform for future models poised to service this new offer.

Safran Helicopters Engines announced on 17 June that it had obtained EASA certification for its Arrano 1A engine. It prefigures the Airbus Helicopters H160, expected by the end of 2019, with a view to its entry into service in 2020 at Babcock International, its launch customer. “We gave all the certification notes to EASA, which approved them,” Bruno Bellanger, Safran Helicopter Engines’ program director, told to the ‘Journal de l’Aviation’ before the show

. “There is only one administrative task left to confirm it” he added. The Arrano is also expected to equip the future HIL ‘Guepard’ aircraft currently developed for the French Armed Forces.

Airbus Helicopters and the French Ministry for Transport (DGAC) announced the launch of a research project aimed at demonstrating the use of a hybrid propulsion system on board a single-engine helicopter testbed. This initiative, which will lead to the first flight of a demonstrator in 2020, will focus on the integration of an electric backup system on the testbed helicopter in order to power the rotor system for up to 30 seconds, without the use of the main gas turbine.

As part of this research program, this concept will be matured to a Technology Readiness Level (TRL) 6, bringing it closer to potential certification and industrialization.

The demonstration package will include an electric motor provided by Thales, a battery pack developed by Airbus Defence and Space as well as electric converters provided by ADENEO. It will be installed and test-flown on an H130 single-engine testbed helicopter.

The project will be jointly funded by DGAC and Airbus Helicopter.

This article was published on June 24, 2019 by our partner defenceWeb.