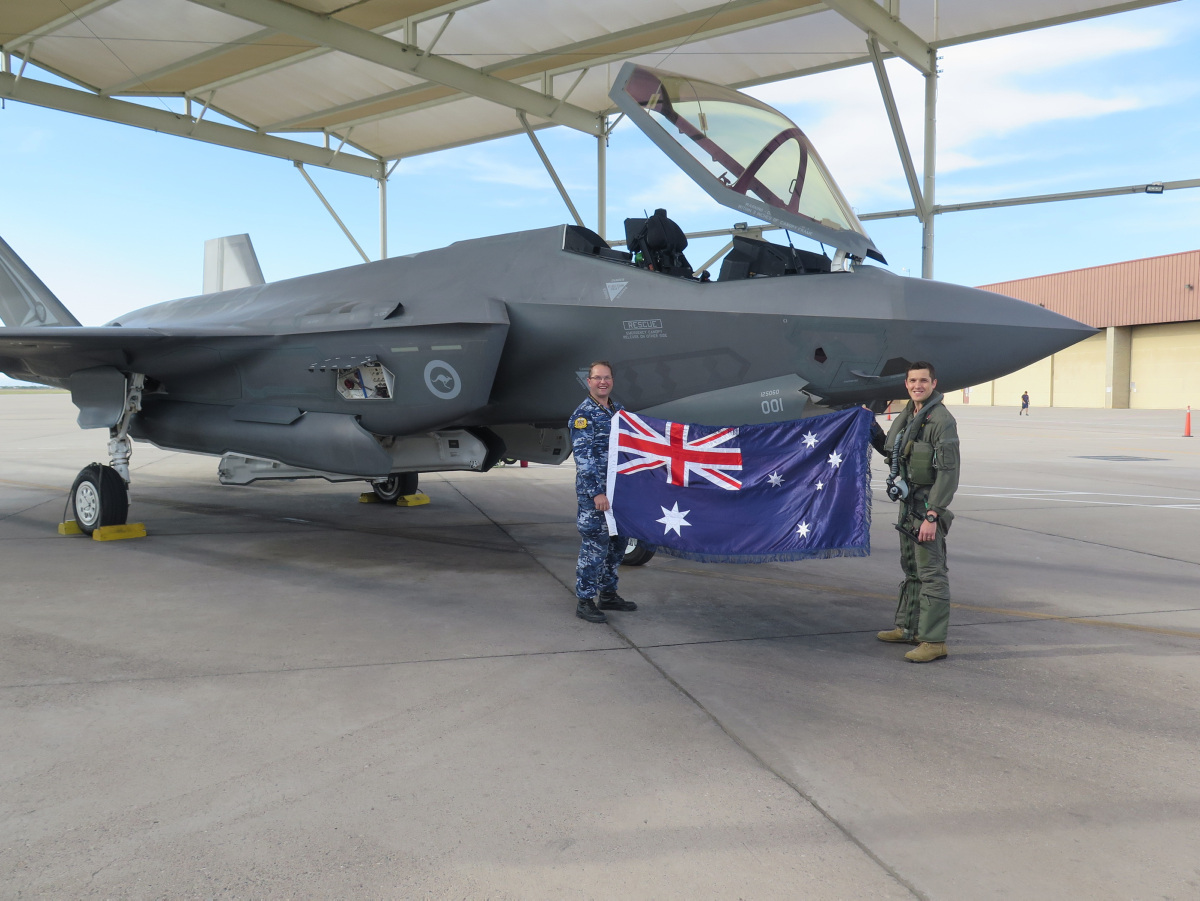 The first Australian F-35A aircraft to roll off Lockheed Martin’s Texas production line back in 2014 has completed 1000 flying hours over the skies of Arizona.

Australian F-35A pilot Flight Lieutenant Adrian Herenda was at the controls of A35-001 as the clock ticked over 1000 hours.

The former F/A-18A pilot has been flying the F-35A for about 12 months and said it was a good feeling to be flying the jet when it reached the milestone.

“The F-35A provides the pilot with phenomenal situational awareness, which is a significant benefit when operating in complex threat environments,” Flight Lieutenant Herenda said.

Aircraft A35-001 is currently being operated by the international Pilot Training Centre (PTC) at Luke Air Force Base (AFB) in the US as part of a pool of training aircraft qualifying F-35A pilots and maintainers from across the globe.

“It demonstrates the maturity of our F-35A capability and showcases the importance of the international F-35 partnership,” Air Commodore Keddie said.

“A35-001 is one of five Australian aircraft at Luke AFB, with other F-35 partner nations also contributing aircraft to the PTC in a show of global collaboration that has been the cornerstone of the F-35 Program since the earliest days.”

Air Vehicle Sub-Project manager Squadron Leader Brook Porter, of JSF Branch in Capability Acquisition and Sustainment Group (CASG), said as the first Australian F-35A, A35-001 was the visible symbol of a new type of weapon system that had already provided reliable pilot training for Australia and the F-35 Cooperative Partnership.

“In reaching this milestone, A35-001 typifies the extraordinary contribution that Australia has made as a partner nation within the global F-35 Program,” Squadron Leader Porter said.

“It’s another significant step forward as the F-35A weapon system continues its successful path to becoming our future fighter capability – a capability that provides obvious benefits to Defence but is also highly profitable to Australian industry, with more than 50 Australian companies winning more than A$1.7 billion in production contracts to date.”

“Given A35-001 completed most of its 1000 flying hours at the PTC, this milestone highlights the contribution Australia has made to the collaborative training environment, with more than 1000 F-35 pilots now qualified and flying with their respective services,” Mr Rafferty said.

Australia has now accepted 26 F-35A aircraft in total. In addition to the five at the PTC, 17 are operating at No. 3 Squadron and No. 2 Operational Conversion Unit at RAAF Base Williamtown. The remaining four jets are scheduled to transit from the US to Australia before August.

Mr Rafferty said JSF Branch personnel played a key role in the acquisition, initial certification and airworthiness management of Australia’s F-35A fleet from 2014 until mid-2018. In 2018, the Air Combat Systems Program Office (ACSPO) in CASG assumed responsibility for airworthiness and overall sustainment management of the fleet.

“This demonstrates the critical and ongoing collaboration taking place as we work to ensure all 72 jets are delivered to Australia by the end of 2023 for Final Operating Capability [FOC],” he said.

Squadron Leader Porter said the Mission Systems team in JSF Branch was focused on ensuring Australia’s needs were rolled into the weapon system as the aircraft evolved over its life cycle.

“Since 2014, we [Australia] have grown our fleet to 26 aircraft, established training systems, simulators and the complex Autonomic Logistics Information System, developed electronic warfare reprogramming capabilities and upgraded RAAF bases to handle the F-35A. We have also assisted in the creation of Australian-based industry support,” Squadron Leader Porter said.

“We have increased our pace from a crawl to a jog, with ACSPO and Air Combat Group rapidly taking up the reins and doing so with aplomb.”

It was important to acknowledge that the achievement of the 1000 flying hours milestone was the result of “tireless work by so many people, past and present, working together”.

“There is a lot more work to be done and we are well prepared,” he said.

This is the final year of the RAAF’s contribution to the PTC. From 2021, all F-35 training is planned to be conducted in Australia.

Published by the Australian Department of Defence on June 5, 2020.