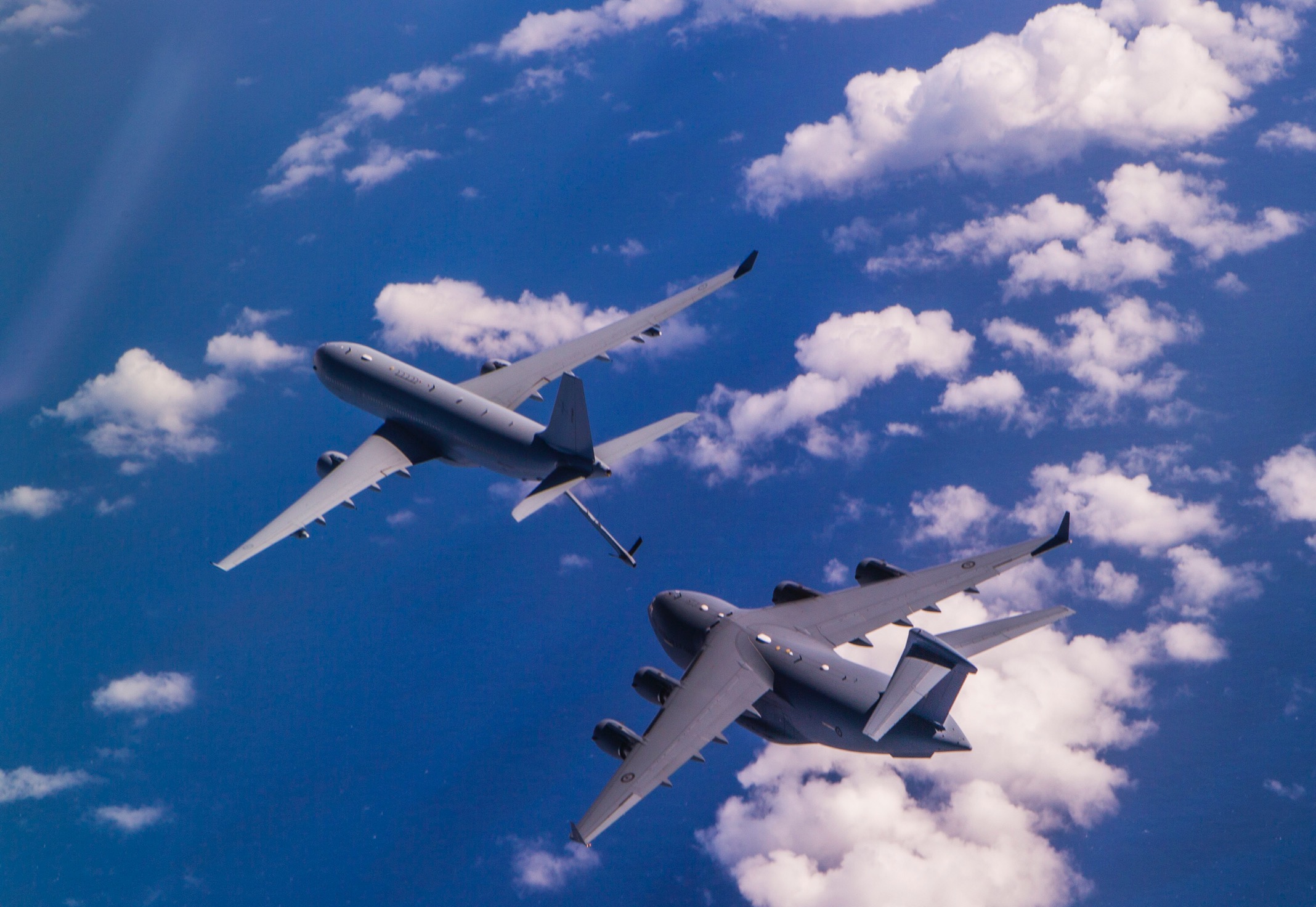 In an article first published on April 30, 2016, we reported on our time with the RAAF at Edwards Air Force Base.

After our day with the F-35 Developmental Test Team at Edwards AFB, we met with the KC-30A team at Edwards. The team was continuing the effort to clear the tanker boom with an ever-growing number of receiver aircraft.

The team we met with had experience with the aircraft during its current operations and the Middle East and provided a good overview to the aircraft, its evolution, and its role in shaping what has been the first engagement of the RAAF with its new combined air capabilities of Wedgetail, KC-30A, fighters and support and C2 elements to a long-distance operation.

This new capability of the RAAF to deploy a sovereign force package provides the Australian Defence Force and the Australian political leaders with new options and possibilities for national or coalition engagements worldwide.

The members of the team who participated in the interview are as follows:

The main purpose of the team at Edwards was to work on C-17 and F-16 certification for the KC-30A boom.

The tanker has operated the hose and drogue system for some time, but the boom is just now becoming IOC’d.

Question: When visiting the tanker squadron a couple of years ago and prior to your deployment to the Middle East, you were working on getting the boom operational.

How did that process happen?

Answer: Air Vice-Marshal Chris Deeble was given the task of shaping a way ahead.

And he did this by reworking the relationship with Airbus so that there could be a complete sharing of data and information to get the boom operational as effectively and quickly as possible.

We formed a joint committee or an integrated team where we shared all knowledge and work towards finding a common solution for the way ahead.

We removed the barriers that were artificially in place between Airbus and ourselves.

We pared down our requirements to those, which were both needed and realistic, and got rid of the ones which were generated more by our bureaucratic process than by what was needed for operational realities.

We wanted to get a capable and effective system more rapidly through this process and that is what has happened.

Question: Those who do not know about your tanker will not know that you tank from the front, rather than the rear of the aircraft.

What advantages has this given you in operations?

Answer: A major advantage when combined with the IR cameras and illuminations is that we can operate at night as effectively as in the day.

The view is so crisp that we can see the receiver pilot’s teeth when he comes in for fuel.

It is absolutely amazing.

And teamwork is much better.

We can have a very integrated team of the pilot, co-pilot and ARO (Air Refueling Officer) working together on the flight deck to work the mission with the aircraft coming in for fuel.

Question: Could you talk about your operational experiences?

Answer: With a new program, generally, you crawl, walk and then run.

With this program, we needed the capability relatively quickly so we sort of crawled and then ran.

The deployment to the Middle East has rapidly accelerated our maturing of the aircraft.

We operate one tanker at a time in Operation Okra and a deployment is four months.

Some airmen have already completed three or four rotations in the mission.

Even though we have only one tanker there, we are delivering more than 10% of all the fuel in the operation.

We have offloaded around 40-45 million pounds of fuel in the Middle East during the operation to coalition forces.

We are operating at 96-98 percent mission success rate, and the maintenance has been outstanding.

It is a commercial plane with military systems onboard and is built for rapid fuel intake, for commercial airlines expect to turn around planes rapidly.

They don’t make money with the plane on the ground.

We can do this as well, but are limited only by the austere conditions at military bases which slows the refueling process.

And the efficiency of the engines is outstanding which means that we burn less fuel than a KC-10 or KC-135 when flying and doing the tanking operations.

Question: With the situational awareness which you have on the plane, you operate the plane often to the fighter rather than forging a track to which the fighter goes.

Could you describe that capability?

Answer: We have a very good communications suite, including SATCOM, on the aircraft, as well as Link 16.

So we can see the fighters in the battlespace and we can see their fuel loads and anticipate where the need for refueling might lie.

It is about positioning yourself efficiently to refuel fighters to get them back in the fight as rapidly as possible; it is not just about being a tracked gas station in the sky.

And with our communications capabilities we can act as a relay between the fighters and other assets in the battlespace and link back to the home base as needed as well.

We can function as a communications relay for the fighter fleet as well.

Question: You are reshaping the tanker culture?

Where do your crews come from and how are they preparing for the boom part of your tanker’s future?

Answer: We have a mixture of people with fighter, tanker and airlift experience.

It is a mixed crew in terms of background.

And we have an exchange with the USAF with the KC-10 are building up our boom training and experience with them as well.

Question: How are the coalition partners responding to your tanker and your efforts?

Answer: We are the tanker of choice.

The amount of respect we are getting from being in the Middle East, I’ve never seen anywhere else. Especially from Marines and the U.S. Navy, we constantly hear: “We want you guys every time we’re going to do a strike package.”

So whenever there’s a strike package happening, they request us when possible: “We want the Aussie KC-30 tanker on board.“

Question: The KC-30A is being used by a number of other Air Forces, although you are the lead country is using the aircraft. What have been your interactions with them?

Answer: We have growing interaction with non-USAF’s which is also broadening our mutual experience.

For example, we have an exchange with the French, whereby the French are leveraging our work to shape their transition strategy with their own tanker.

All of the clearances we are doing for ourselves benefit all the other KC-30A air forces.

And we think we are driving the entire KC-30A enterprise forward as well evolve our experience and our capabilities.

During the tests here, we have an Airbus person with us as we certify the boom.

We have embedded him in our team and put an Australian flag on his back and made him feel like one of us.

And that breaks down the barriers necessary to have the kind of innovation, which we want to see.

Editor’s Note: Not only are the Aussies evolving the qualitative elements of their tanking operations and culture, but they are increasing the numbers as well.

This is what the Aussies are doing.