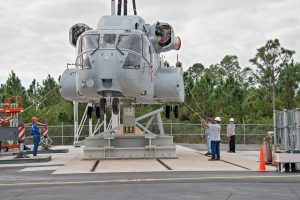 During my visit to Sikorsky’s West Palm Beach facility on October 26, 2017, I had a chance to visit what seems at first blush a rather odd sight for a helicopter testing program, namely, a fully operational CH-53K, except for one thing.

It does not fly, conventionally. It doesn’t fly because it is physically restrained and anchored to the Earth.

The Ground Test Vehicle (GTV) was built by Sikorsky as part of the developmental test fleet and began its testing in early 2014 almost 2 years in advance of program first flight.

The utilization of a GTV is very effective in light that inherent in a development test program for any new aircraft is “discovery” of issues that are subsequently resolved through procedural, hardware or software changes.

Early GTV testing identifies issues and facilitates mitigating improvements to the hardware and software in a safer and more cost effective manner.

This allows for early incorporation of these improvements into the 4-ship fleet of Engineering Developmental Models (EDMs) and minimizes likelihood of discovery during flight test.

And the GTV as a fully functional helicopter in everything but actually taking off, and provides training for flight crews as well.

Without the GTV, many test discoveries would not have been found until the test program aircraft were in actual flight, which would have caused delay to the test program with much higher cost for discovery mitigation.

In many cases discoveries “on the deck” were found in the GTV and were already in the process of being resolved while, in parallel, other test regimes were productively being evaluated on the GTV. This may not have been possible with an aircraft in flight.  The result is greater reliability, safety, envelope expansion testing, and security for the test program.

As a fully integrated air vehicle its testing has already demonstrated system level and component behavior while exercising the full dynamic system at power levels at or above those representative of flight.

The GTV is surrounded by a safety fence and connected to a “block house” control center where flight test engineers monitors the GTV operation.

When I was there, the vehicle was exercising various lift functions and flight test engineers were evaluating how the engines, the gear boxes, and the flight controls worked together when lifting significant loads for the Marines in operations.

To review its role in the program, I had a chance to talk with Chris Harrington, Deputy Program Manager for CH-53K Testing and Evaluation.

During my onsite visit, I was able to discuss the software upgrade process of the CH-53K which is a key part of what makes the 53K a 21st century air system and that earlier interview has already been published.

The follow up interview allowed me to focus specifically on the role of the GTV in the development process and get a report on its role throughout the program.

Question: What has been the role of the GTV in the program?

Chris Harrington: “The GTV was our first fully integrated and operational CH-53K aircraft, although it was destined to never break the bonds of earth under its own power.

“We have done GTVs before on other programs, for example on S-92 and Comanche, and for each of these programs the GTV has provided a path to effectively risk reduce and mature the development aircraft.

Question: When will the GTV for this program retire and how many hours will it have put in by that time?

Chris Harrington: “We are planning to end our use of GTV next year and deliver the vehicle to China Lake for live fire test & evaluation by our customer.

“With over 700 operational hours accumulated on the GTV we have just a couple of hundred hours to go until we retire the GTV and send it off to its “demise” as a live fire test article.

“So you see the CH-53K GTV, from cradle to grave, will serve multiple purposes to effectively benefit the program and our customer.”

How has the GTV been useful in that integration process?

Chris Harrington: “It has been useful both on the hardware as well as software integration sides.

“The GTV has been a key part of working the physical shakedown of the components all working together as an air vehicle system. “Thus the rotor head and transmissions were exercised on the GTV in advance of testing on any of the flying vehicles, and this allowed us to get the dynamic system to a level maturity necessary for safety and performance on EDM aircraft and enabled us to ramp up flight test operational tempo “OPTEMPO” very quickly.

“From a software perspective we worked software loads initially on the GTV before incorporating them onto the flying EDM aircraft.

“We ran the GTV for almost two years as we folded our lessons learned into our first flight of the EDM aircraft, so the GTV served as the launch vehicle so to speak and then has functioned as the prologue of further developments and enhancements we then transitioned to a flying fleet in combination with the GTV.”

Question: And the GTV has been part of the pilot training process as well.

Could you describe this approach?

Chris Harrington: “The chief test pilot has to sign off on CH-53K pilot qualification after they have the requisite hours to fly the aircraft.

“We use the GTV as part of this training process and we also use it today to maintain currency among Sikorsky and US Marine Corps test pilots who fly the aircraft as an integrated test team.

“We similarly utilize the GTV as an aircraft familiarity training tool for new flight test engineers to the program.

“New engineers are indoctrinated to the test program through the GTV as part of the learning process and preparation prior to working on any flight aircraft.

In short, the GTV has been a key part of the process of maturing the integration of this innovative 21st century heavy lift system which represents the next generation of rotary wing heavy lift capability that will serve the U.S. Marine Corps and the free world for decades to come.

Editor’s Note: For a look at the GTV at the outset of the development process, please see the following: