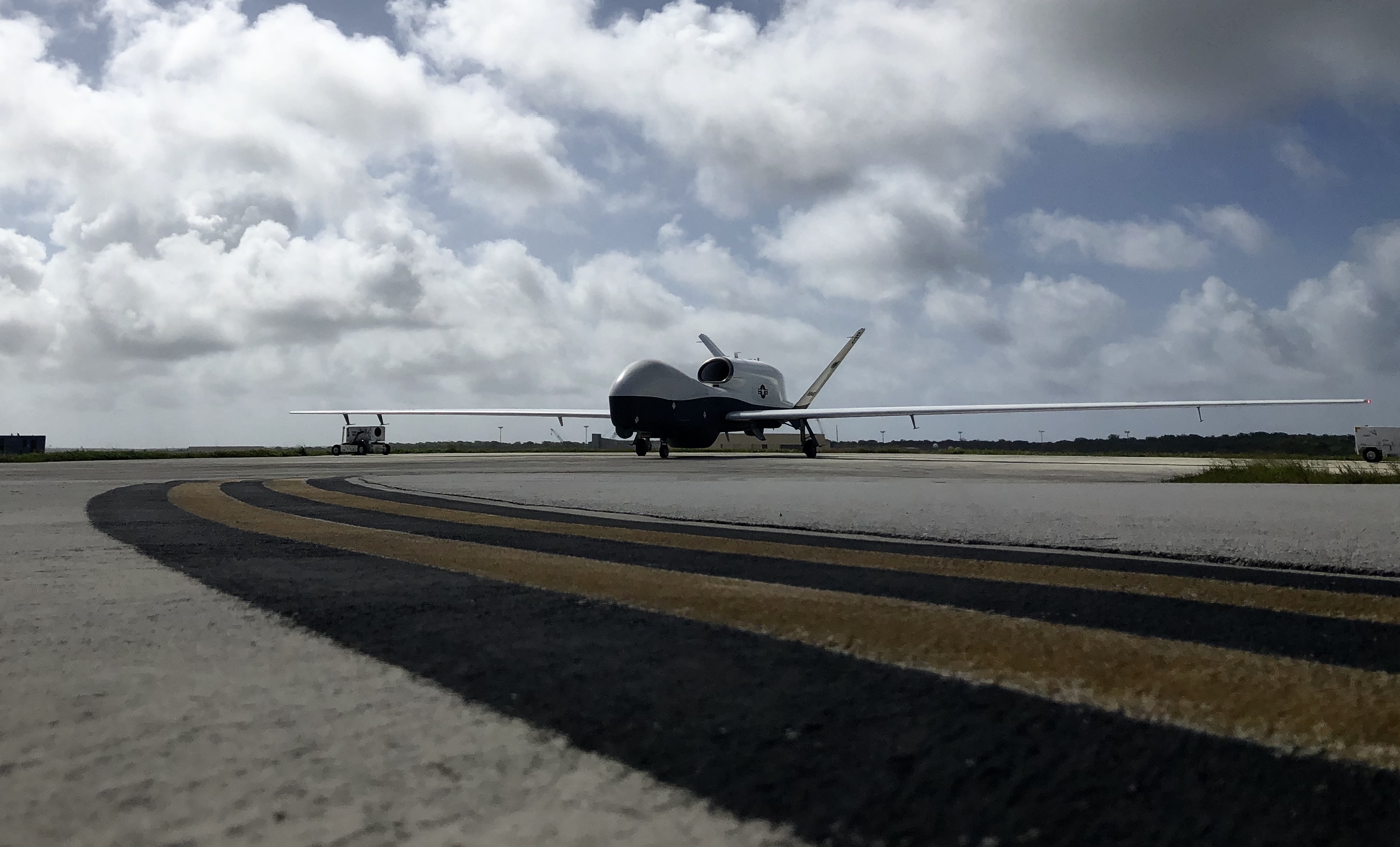 The US Navy has deployed Triton to Guam and has begun its operational history.

According to an article on USNI News by Gidget Fuentes published on May 12, 2020, a pair of MQ-4C Tritons operating from Guam has been integrated into fleet operations and provide reach across the Indo-Pacific.

“The Navy is counting on the Triton, which can operate at greater than 50,000-foot altitudes and at the 2,000-mile-plus range, to provide an unmanned platform for persistent, maritime intelligence, surveillance, and reconnaissance capabilities and work alongside its manned fleet of reconnaissance and surveillance patrol aircraft.

“The Tritons with Unmanned Patrol Squadron 19 – the Navy’s first unmanned aircraft squadron – arrived in Guam in late January to support CTF-72, which oversees the patrol, reconnaissance and surveillance force in the U.S. 7th Fleet region.”

But what exactly does the Triton provide for the interactive kill webs which shape evolving maritime combat capability?

One answer was provided in the Fuentes article:

“The Triton can fly for more than 24-hours at a time, at altitudes higher than 10 miles, with an operational range of 8,200 nautical miles, according to manufacturer North Grumman. The Navy’s program of record would field 68 aircraft.”

An additional answer focuses on what the sensors onboard the aircraft can provide.

According to an article by Andrew McLaughlin published by Australian Defence Business Review:

“The high-flying Triton can stay aloft for 28 hours and features advanced optical, radar and electronic sensors.

“It will complement the manned P-8A Poseidon, and replace the EP-3E electronic intelligence (ELINT) aircraft in US service. On Guam, the aircraft are currently under the command of the Commander of Task Force (CTF) 72.”

These qualities of the platform are obviously important contributions but because the US Navy along with its sister services have moved beyond the platform centric kill chain to shaping interactive webs to guide the strike force, the key question then becomes somewhat different.

What capabilities does the Triton bring to the crisis management and combat environments, and how does it work interactively within the spider webs which make up the kill web enabled force?

A significant part of the answer rests in the recent interview which I did with Rear Admiral Peter Garvin, head of the U.S. Navy’s Maritime Patrol enterprise.

From the outset, the US Navy’s work with industry has focused on building, operating and supporting a dyad to deliver the common operational picture driving the next round of anti-submarine warfare and maritime domain awareness.

This P-8 dyad with Triton delivers a new capability for the fleet.

This is manned-unmanned teaming being put into practice today, not in some distant combat future.

According to Rear Admiral Garvin: “We are taking full advantage of the leap forward in many sensors and communications technology to interoperate in ways that were previously impossible.

“Faced with a resurgent and challenging ASW threat, we have not given up on the old tool sets, but we are adding to them and weaving them into a new approach.

“We are clearly shifting from linear or sequential operational thinking into a broader understanding and implementation of a web of capabilities.

“In the past, when operating a P-3, you operated alone, you had to be the sensor and the shooter. To be clear, it remains necessary that every P-8 aircraft and crew be ready and able to complete the kill chain organically, but the fact of the matter is that is not the way it always has to be, nor is it the way that we’re planning for it to have to be going forward.

“On any given mission, the P-8 could be the sensor and perhaps the allied submarine is the shooter. Or vice versa. Or maybe the destroyer is the one that happens to get the targeting solution and the helicopter is the one that actually drops the weapon.

“Sensor, shooter, communications node, or perhaps several at once, but each platform is all part of a kill web.”

Another part of the answer comes from the follow-on interview which I had with Rear Admiral Garvin where we discussed how the dyad interacting with allies was a game changer in terms of building out a much larger canvas upon which the interactive kill webs could operate.

“We started with a discussion of the reach of the maritime patrol enterprise by focusing on a way to conceptualize the way ahead for shaping an integrated distributed force. If one conceptualizes the battlespace as layers of visuals placed one on the other, it becomes clear what is different in terms of leveraging the combat force within an interactive web.

“The first layer would be the operational geography of the battlespace.

“The second layer would be the threat elements most relevant to the blue force.

“The third layer in the case of a maritime patrol enterprise would be commercial maritime shipping traffic.  Unlike air traffic, maritime traffic is very diverse, very large, and provides a key masking function for any adversary.

“The fourth layer would be the laydown of blue assets, including the geographic distribution of allied forces in the region or area of interest. The fifth layer would then be where the P-8 / Triton dyad operates.

“With such a schematic, it is quickly evident that if the U.S. Navy’s P-8 / Triton dyad is integratable with allied maritime patrol capabilities the reach of both the U.S. and allied interactive web capabilities is substantially enhanced.”

If we focus on what I referred to as the third layer, namely, the commercial maritime traffic, the Triton makes a unique contribution here.

With the height at which it operates, and with the sensors onboard, including the AIS tracking system, it provides a significant capability to prioritize those aspects of the maritime domain which need to be prioritized.

This is a major contribution even before we get to the question of what various specialized sensors can provide for other aspects of the maritime battlespace is enhanced by the connectivity built into the platform as well, in terms of an ability to deliver data over various wave forms.

As one Naval officer put it, the way to think about the maritime battlespace as the U.S. Navy evolves its capabilities is an ability to deliver a variety of kill webs which interactively can deliver domain situational awareness dominance.

This means in effect that C2 is moving in an interactive fashion in two directions – C2 at the tactical edge and C2 at the numbered fleet level to dynamically structure and task evolving task forces.

Another way to understand how the Triton contributes uniquely to the evolving kill web approach is an aspect of its unique networking capabilities.

In the discussion with Zmarzlak, he highlighted the importance of focus on how the Triton operates as well as a key way to understand its contribution to the maritime kill web.

This part of the discussion then got at the most overlooked impact of Triton on the evolution of air-maritime forces (do not forget how important Triton will become to targeting in the Pacific for the USAF as it engages in maritime strike operations as well).

For full value to be derived from the Triton fleet, a kill web mentality will have to replace what has been a sortie generation mentality for the carrier fleet.

It is about building in an orbit-enabled concept of operations, rather than thinking of the aircraft in sortie-generation concepts of operations.

What this means is that for the Navy to get full value out of its Triton force it needs to think significantly beyond a dyad approach.

It means embracing what a high altitude remotely piloted vehicle with a sensor package which can help build a common operational picture generated by orbits can provide for a kill web strike force, which may well operate within a sortie-generated concept of operations, which the orbiting high altitude asset will provide.

With a four ship 24/7 coverage of the area where you will operate or wish to operate, the Triton can provide domain knowledge crucial to informing both the threat and opportunity calculus in an area of operations.

And because the orbit is not about sorting into a specific area, one can sort through where the best advantages might lie for the projection of force without tipping your hand by having to fly to a specific tactical area.

This is a work in progress, but it is a new capability which if fully embraced provides significant warfighting advantages to the United States and its allies.

But for those advantages to be realized, appropriate training, and operational approaches need to be shaped, executed and evolved over time.

In an article by Sam LaGrone of USNI News published on April 10, 2018, “the pair of 131-ft wingspan UAVs built by Northrop Grumman for intelligence, surveillance and reconnaissance missions will deploy with an early set of capabilities designed for maritime ISR and will grow to include a signals intelligence function in 2021, Triton program manager Capt. Dan Mackin said in a briefing at the Navy League’s Sea Air Space 2018 exposition.”

“Part of the IOC process will include adding a top secret “multi-intelligence” function to1 Triton that will eventually replace the Navy’s Lockheed Martin EP-3E Aries II manned signals intelligence platforms. Congress mandated the Navy retire the EP-3E Aries II only after it had found a way to field a similar capability.

“Eventually, the Triton program will consist of five four-aircraft orbits around the world. The operators will reside in the two main bases at Mayport and Whidbey Island.

“The system is made up of an aircraft and a main operating base where the warfighter starts taking that data over wideband SATCOM link you start assimilating that data, put that data together to understand the [maritime picture],” Mackin said.

“The Navy will have five operating bases where the aircraft will be maintained, launched and recovered. The forward bases will be at Naval Air Station Sigonella, Italy; an unspecified location in the Middle East; Naval Air Station Guam; Mayport; and Point Mugu.”

In that article, there was a snapshot of a NAVAIR representation of the envisaged Orbit engagement of the Triton. In short, one cannot describe Triton simply in platform terms, which would miss a lot because it was designed from the ground up to be part of a wider force construct.

Bottom-line: Triton provides a key way ahead for enhanced crisis management and combat capabilities for the joint and coalition force.