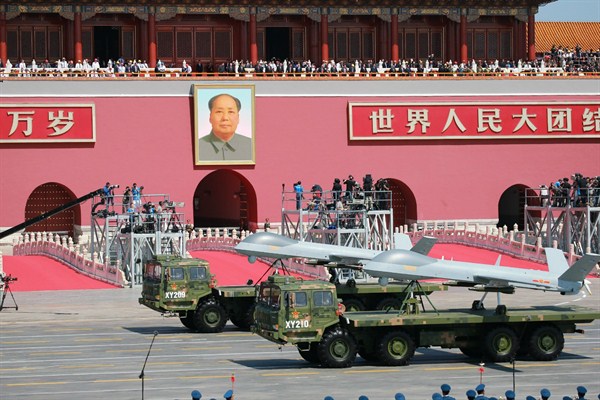 Countries in the Middle East are increasingly buying armed unmanned aerial vehicles (UAVs), especially from countries like China and Turkey which are stepping in to fill a gap created by the United States’ strict UAV export controls.

The 50-page study focuses on the countries that operate or simply possess military UAVs, which are Jordan, Iraq, Israel, Saudi Arabia, the UAE, Iran and Turkey.

The US policy on UAV exports intends to prevent them from falling into hostile hands.

Thus, the US decided to stop delivering UAVs to some Middle Eastern countries. To get around this issue, these countries decided to purchase from other providers or to manufacture UAVs by themselves.

China has considerably seized the opportunity and has supplied armed UAVs to several countries forbidden to purchase from the US. Moreover, the Chinese sales to Middle Eastern countries are at a far cheaper price than US ones and without consideration of human rights violations.

China is not a member of the Missile Technology Control Regime (MTCR) which aim is to prevent proliferation of missiles which can carry mass destruction weapons.

China only recognizes two criteria in its exports policy.

First, it deals only with states, as non-state actors are seen by China as threats to sovereignty.

Secondly, it prioritizes countries that want to use UAVs for counterterrorism operations.

China sees UAVs as an ideal counterterrorism tool for itself and its customers as they have the capacity to carry out reconnaissance and precision strikes.

Nevertheless, the question of whether China would be able to supply satellite control capabilities to its customers or commercial satellite networks remains unanswered, as the report underlines.

Without such satellites, the operational range of UAVs would be reduced to 150-200 km around the ground control stations.

The study underlines that last April, the US administration loosened its UAV export policy. With this new policy, exportations are possible to allies “in situations where it will enhance those partners’ security and their ability to advance shared security or counterterrorism objectives”, as the report of the US Department of State tells.

For now, the British study explains that no changes were seen in the country’s procurement policy but it recognizes that this relaxing policy could have major consequences.

First, it could lead to a competition between the US and China for influence and participation in the regional market.

Secondly, it could also alter the factors influencing the use of UAVs by Middle Eastern countries.

The first group gathers countries for which the acquisition of armed UAVs has not resulted in major changes in the way they see their airpower, with Jordan, Iraq, Israel and Saudi Arabia inside; while it has impacted the second group composed of Iran, the UAE and Turkey.

For Jordan, RUSI reminds that the country tried to purchase armed US UAVs for years without success. Following this rejection, Jordan is rumoured to have acquired Chinese CH-4Bs manufactured by China Aerospace Science and Technology Corporation (CASC) in 2016.

The study tells that the primary goal of this purchase may be to convince the US to sell them the MQ-9 Reaper or MQ-1 Predator. Iraq also has CH-4Bs but without satellite communication capabilities and without inter-operability with Western systems.

Israel’s UAV inventory isn’t known but it is estimated that the country accounted for more than 60% of international UAV exports over the three previous decades with 165 UAVs delivered to foreign customers.

Nevertheless, in 2014, the country purchased two CH-4s (we don’t know if it’s the armed or unarmed version).

Moreover, the country announced a plan to manufacture its own armed UAVs obtaining a licence from the Chinese state-owned Chengdu Aircraft Industry Group (CAIG) to develop up to 300 Wing Loong and eventually the new CH-5 armed UAVs, as the study tells.

In the second group, UAVs are seen as a tool to compensate for the weakness of conventional airpower.

Iran now manufactures two Iranian-made armed UAVs: the Shahed-129 and the Mohajer 6. The first one is based on the Israeli Hermes model. The UAE has invested in UAVs since 2013 with the purchase of the US MQ-1 Predator XP, delivered in 2017.

Designed by General Atomics especially for the UAE, they can’t carry weapons.

Afterwards, the country purchased two Chinese Wing Loongs, the equivalent of the Predator.

In early 2017, they also acquired Wing Loongs II. Even if neither China nor the UAE have confirmed the last purchase, the UAVs were seen at a UAE air base.

These UAVs were purchased for prestige but also to convince the US to sell the armed version of its MQ-9 Reaper and MQ-1 UAVs.

To finish, the study looked at Turkey’s UAVs. Turkey was offered only the unarmed version of the MQ-1 Predator in 2008, which it refused.

Since then, it purchased unarmed Heron TPs from Israel in 2010 and as then developed its own UAVs. Two UAVs are already in production, the Anka-S and Bayraktar TB2, while a third one, the Karayel is in the prototyping and testing phase.

The country plans to build at least 100 armed UAVs for surveillance and strikes against the Kurds.

The study underlines the important role of China in the region as it fills the gap left by the US. Procurement from China gives Middle Eastern countries a lot of advantages, from cheap prices to access to technology without MTCR restrictions.

Nevertheless, the relaxing of the US policy might reverse the trend and lead to a strengthened competition between the two countries.

Written by ADIT – The Bulletin and republished with permission.

This article was published by defenceWeb on January 16, 2019.