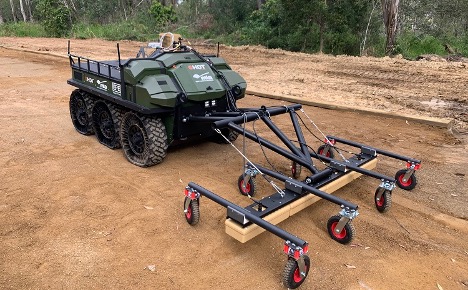 Where once soldiers on foot cleared roads of mines by slow and careful scanning with mine detectors, Defence is now assessing new technologies which will see that risky mission handed over to the robots.

That robot will be in the form of an unmanned ground vehicle (UGV) equipped with a ground penetrating radar (GPR), day and night cameras, and an onboard quadcopter drone, able to go out on its own to survey the roads for buried mines or improvised explosive devices (IEDs).

During Australia’s long engagement in southern Afghanistan, route clearance for vehicle convoys carrying troops or supplies remained a constant challenge, with vehicles regularly blown up. Of Australia’s 41 dead in Afghanistan, 12 died from the blast of landmines and IEDs, among them engineers killed in the process of clearing IEDs.

Under a $3.7 million contract awarded through the Defence Innovation Hub under Joint Project JP 154 Phase 4, Downer Defence Systems is prime system integrator on the Muskito project to develop a UGV based on the US-made HDT Hunter Wolf, a six-wheeled vehicle developed for the US military.

A major demonstration of the Muskito is planned for August. “Muskito itself is an integrated counter IED concept. It uses aerial and ground-based autonomous systems and machine learning to detect threats above and below the ground,” Anthony Davis, Downer’s Muskito project lead, told ADBR in an exclusive interview in the lead-up to LAND FORCES 2021.

“We have an unmanned ground vehicle and unmanned aerial vehicle with a suite of sensors,” he added. “The information drawn from the sensors is displayed on a visual interface to support the commander’s decision making.”

That visual interface will be a tablet or Toughbook displaying feeds from the GPR, Muskito’s onboard camera and, if operating, the UAS, which can detect items of immediate concern such as command wires or suspicious individuals.

Significantly, Muskito will incorporate machine learning and artificial intelligence. That means it will be able to identify suspect objects detected by the GPR without requiring constant eyes on by the operator.

Though initially intended for semi-autonomous operation under guidance of an operator, Muskito will eventually be capable of going out on its own to scan and map a particular route, detecting any IEDs. But it’s not intended that Muskito will have any ability to deal with IEDs – that will be up to other technology.

EPE project manager David Rye said procedures for route clearance had not changed since World War 2 – soldiers on foot with mine-detectors. And while detection technology has greatly improved, so too have the abilities of insurgent bomb makers.

In Afghanistan, Australia acquired a pair of Huskys from Canada – large armoured GPR-equipped vehicles to detect implanted IEDs, along with a Buffalo vehicle equipped with a long arm and oversized garden fork-like device to dig up IEDs.

These vehicles were state-of-the-art but were large, heavy, and slow. But as with proposed new naval mine clearance technology, Defence aims to keep its specialist personnel well away from explosive items by handing the task to robotic systems.

“The Muskito is a potential game changer as will change how we actually clear and prove routes,” Rye told ADBR. “Not only are you taking the people out of the picture because you are using mechanical and autonomous means, these systems may be used to constantly prove routes.”