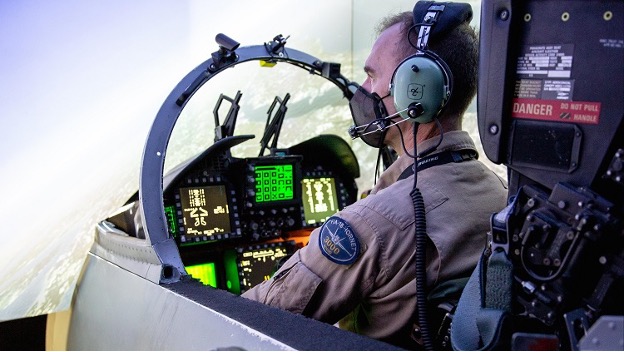 The demonstration showcased the Synthetic Inject to Live (SITL) – Live Virtual Constructive (LVC) system’s maturity and performance in supporting training against near-peer threats, while validating its technology readiness level with the F/A-18E/F Super Hornet and EA-18G Growler. The resulting SLATE SITL capabilities, technical specifications and lessons learned are currently in work for transition into the Navy’s Training Program of Record, the Tactical Combat Training System (TCTS) Increment II. Merging the two technologies presents the quickest way to get the best capabilities into the hands of the fleet as quickly as possible.

The injection of virtual and constructive entities into live F/A-18E/F and EA-18G platforms is designed to train and prepare joint forces for combat, helping maintain worldwide air and surface dominance, Sullivan explained. The SLATE project’s joint technical and interoperability standards enable cost-effective and cutting-edge training opportunities that promote proficiency for the joint warfighter across fifth-generation, advanced counter-air capabilities of the U.S. Navy and Air Force.

“Building off the highly successful Joint Capstone event, conducted in 2018, at the Nellis Test and Training Range, the SLATE capability continues to pave the way for LVC training standards across the DoD. The 2021 technical maturation demonstration takes these capabilities to the next level by adding in cross-platform integration and utilizing common Navy systems,” said Sullivan.

The SLATE flights also included the integration of the Navy’s Next Generation Threat System for both tethered and untethered operations; F/A-18E/F simulators; the F-35 Effects Based Simulator; Aegis Battle Force Tactical Trainers; and a fleet MH-60R tactical operational flight trainer in Naval Air Station Jacksonville, Florida, via the Navy’s Continuous Training Environment. All virtual and constructive radar tracks were observed and confirmed in the live cockpit by the supporting VX-23 aircrew during debrief, Sullivan said.

In addition, the Royal Australian Air Force participated in the SLATE demo, further promoting and informing future coalition and joint service operations under the U.S. Air Force Encrypted LVC Integrated Training Environment program, which will allow for seamless training between the U.S. and Australia.

This article was published by NAVAIR on October 5, 2021.