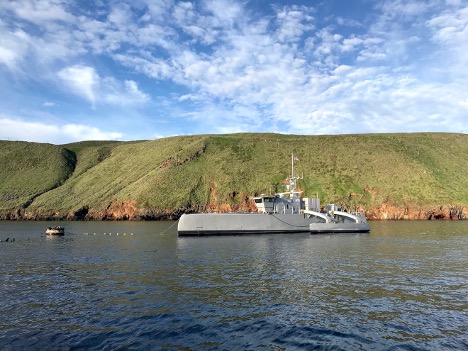 The Navy has awarded a contract for the first unmanned surface vessel it will design and build on its own, a key milestone for the eventual family of unmanned systems that will be a key component of the future surface fleet, according to a Monday contract announcement from the Pentagon.

The contract calls for delivering the first prototype by the end of the Fiscal Year 2023, according to a release from NAVSEA.

“The president’s 2021 budget request for the Navy includes additional funding for a second MUSV prototype in FY23. The acquisition strategy for the FY23 vessel is to be determined, however, for flexibility, the development contract contains options for additional USVs,” read the statement.

The award to L3 for MUSV is the Navy’s first bite at the apple for developing a USV. DARPA contracted for two Sea Hunter vessels in what was originally the Anti-Submarine Warfare (ASW) Continuous Trail Unmanned Vessel (ACTUV) program but has since shifted its focus to be the predecessor to MUSV. A Pentagon office also contracted for two Large USVs as part of the Overlord program, and the Navy will also take those vessels and use them to shape an eventual LUSV program of its own.

The Navy envisions a family of unmanned systems that will be the backbone of a future fleet of netted “attritable” platforms that will provide lower-cost options compared to manned surface combatants like the Arleigh Burke-class destroyer or the new FFG(X) frigate program.

“The initial focus is on the design, fabrication, testing and support of funded MUSV prototype vehicles. Rapid prototyping efforts will inform procurement of additional MUSV units,” Navy spokesman Capt. Danny Hernandez told USNI News on Tuesday.
“The Navy will continue to assess the MUSV acquisition plan and has the option to conduct new or additional competitions, if warranted.”