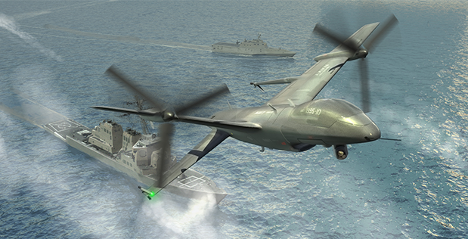 The Marines have ditched their plan to field a very large drone on amphibious ships, instead breaking the four-year-old MUX program into a family of systems that will include a very large land-based unmanned aerial vehicle and a medium-sized one for shipboard operations.

Deputy Commandant of the Marine Corps for Aviation Lt. Gen. Steven Rudder told USNI News today after a hearing that it became clear as the service moved forward with the program that it couldn’t get the endurance it needed for high-end missions like airborne early warning and communications relay with the kind of air vehicle design that would be able to launch vertically off a ship’s helicopter deck.

“I think what we discovered with the MUX program is that it’s going to require a family of systems. The initial requirement had a long list of very critical requirements, but when we did the analysis and tried to fit it inside one air vehicle,” they realized they had competing needs, Rudder said.
“With a family of systems approach, my sense is we’re going to have an air vehicle that can do some of the requirements, some of the higher-end requirements, potentially from a land-based high-endurance vehicle, but we’re still going to maintain a shipboard capability, it just may not be as big as we originally configured.”

For the rest of the article which was published on March 10, 2020, see the following: