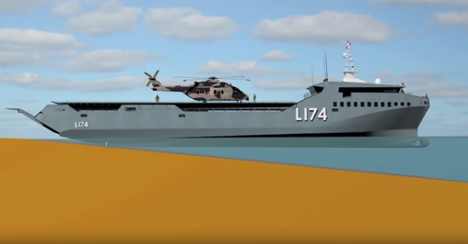 The Navy’s research and development portfolio will devote $30 million to a “next-generation medium amphibious ship design” that will likely be based on an Australian designer’s stern landing vessel.

Shortly after Commandant of the Marine Corps Gen. David Berger took command of the service in July 2019, he began speaking of a new vision for the amphibious force – one that did not rely on a fleet of 38 traditional amphibious warships that the service had fought for for years, but instead would continue to leverage the aircraft-delivery power of the amphibious assault ship (LHA/LHD) and the command and control prowess of the amphibious transport dock (LPD) but also invest in new alternate amphibs to help the Marine Corps disperse its people and gear around the littorals.

The Navy and Marines announced in the Fiscal Year 2021 budget request that they will seek a medium amphibious ship that can support the kind of dispersed, agile, constantly relocating force described in the Littoral Operations in Contested Environment (LOCE) and Expeditionary Advanced Base Operations (EABO) concepts the Marine Corps has written, as well as the overarching Distributed Maritime Operations (DMO) from the Navy. According to a budget overview document, “a next-generation medium amphibious ship will be a stern landing vessel to support amphibious ship-to-shore operations.”

For the rest of the article which was published on February 20, 2020, see the following: