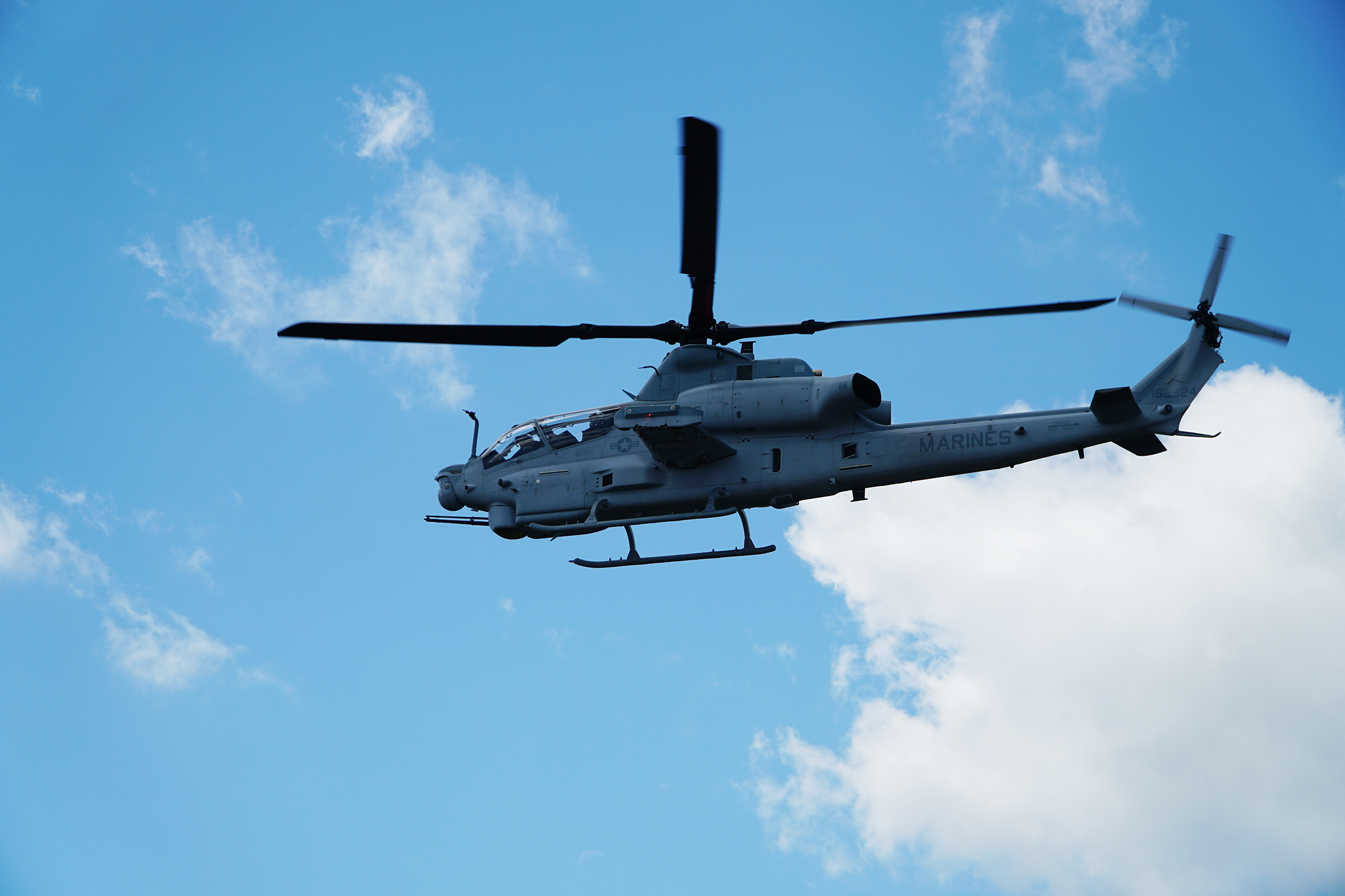 In a June 7, 2021 press release, NAVAIR announced that the AH-1Z or Viper attack helicopter had its first flight with its new digital interoperability suite.

For the first time in flight, the AH-1Z Viper established a two way connection between a ground station and the aircraft’s Link 16 and Advanced Networking Wideband Waveform (ANW2) systems.

The DI suite also modernizes how data is loaded to and from the H-1 platform.

“The H-1 has decades of battlefield experience, it has evolved to fight in numerous environments,” said Col. Vasilios Pappas, USMC H-1 Light/Attack Helicopters program office (PMA-276) program manager. “The integration of these data links aligns with this platforms’ ability to adapt to the ever-changing threat and meet the needs of current and future warfighters.”

Link 16 and ANW2 enable the AH-1Z to rapidly share information with other weapon systems, provide greater situational awareness, accelerate the kill chain, and enhance survivability to outmaneuver and defeat the threat across a range of military operations.

During the one-hour flight, conducted by Air Test and Evaluation Squadron (HX) 21, pilots successfully communicated with a multiband networking manpack radio, the PRC-117G, and the Mobile Systems Integration Lab, a ground station designed by Naval Air Warfare Center Aircraft Division (NAWCAD) to validate the suite’s connection with the aircraft.

“The flight was a success and went exactly as expected,” said USMC Capt. Jason Grimes, the first flight pilot and H-1 project officer with HX-21. “There is still work to be done before fleet integration, but it was a step in the right direction in getting a much needed capability to the HMLA [Marine Light Attack Helicopter] squadrons.”

The DI suite includes a new radio, processor, and mission computer software to integrate the information from this new data link onto a new digital map interface. This capability enables the AH-1Z to directly exchange critical data with other Marine Corps and Navy aviation and shipboard systems.

“The flight is the culmination hours of hard work and innovation. I am very proud of the government and industry team’s dedication to making this critical capability for the Marine Corps a reality,” said Pappas.

Flight test on the AH-1Z will continue through the summer, with initial fleet integration expected in 2022. In addition, the program is working with industry and HX-21 to flight test the same DI suite on the UH-1Y Venom later this spring.

And this press release by Bell Helicopter also on June 7, 2021 highlighted the development.

The United States Marine Corps (USMC) has successfully demonstrated in flight testing a two-way connection between the AH-1Z Viper helicopter and a ground station using new Link-16 hardware and software. Bell Textron Inc., a Textron Inc. company manufactures the AH-1Z Viper and Northrop Grumman Corporation has developed the Link-16 system. Link-16 is part of a defined road map of planned improvements designed to ensure the H-1 platform maintains its technological edge and combat capability throughout its service life.

“Bell is excited to help bring this capability to the USMC H-1 community,” said Mike Deslatte, Bell H-1 vice president and program director. “The ability to participate in the modern and connected battlefield makes the aircraft more lethal and better-equipped to support Marines on the ground.”

Link-16 enables the AH-1Z—unlike any other helicopter in the world with its fully integrated anti-air capability and AIM-9 Sidewinder — to quickly obtain and share information from its sensors with other weapons systems using its onboard digital architecture. This is accomplished through Northrop Grumman’s Link-16 package, which includes a new digital moving map, a new security architecture, and the Link-16 and Advanced Networking Wideband Waveform (ANW2) datalinks.

“Northrop Grumman’s Link-16 system will help U.S. Marines today, and well into the future, with critical technology that facilitates coordination, collaboration, and interoperability. By enabling the display and integration of Link-16 data with the H-1 system, pilots of the AH-1Z have greater situational awareness and enhanced survivability,” said James Conroy, vice president, navigation, targeting and survivability, Northrop Grumman. “This milestone also highlights our focus on “speed to fleet,” due to the unprecedented time between demonstrating the concept and getting to first flight. Flexibility and adaptability, using next generation agile development practices, are the only ways to innovate and keep pace with changing mission needs.”

In a collaboration between the USMC H-1 Light/Attack Helicopter program (PMA-276), Bell, and Northrop Grumman, the team leveraged commercial best practices of Agile Development methodologies. This strategy provided an under glass solution from concept requirements to vehicle design testing in 12 months. Northrop Grumman’s Lead Technology Integration group rapidly architected and integrated a mission package for Link-16, including a modern digital mapping solution, for the H-1 platform while Bell’s H-1 program team provided all of the necessary vehicle analysis and modifications to incorporate the mission equipment throughout the existing integrated systems of the AH-1Z. Together, the teams are redefining what it means to rapidly field integrated solutions on existing fielded platforms to increase warfighter capabilities.

“The H-1 has decades of battlefield experience, it has evolved to fight in numerous environments,” said Col. Vasilios Pappas, PMA-276 program manager. “The integration of Link-16 aligns with this platforms’ ability to adapt to the ever-changing threat and meet the needs of current and future warfighters.”

The USMC has flight tests planned for the AH-1Z throughout the summer, which will be followed by flight testing of Link-16 on the UH-1Y Venom. The service anticipates AH-1Z initial fleet integration with Link 16 in 2022.