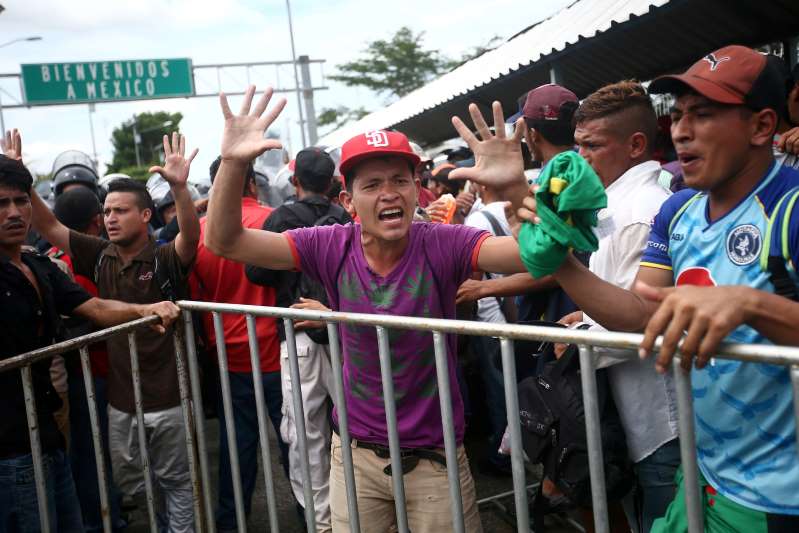 There are established laws and policies within the legal structure of the United States that guide this country in times of chaos.

Unfortunately, the established legal framework has been largely ignored for the last 20 plus years on the grounds of political expediency.

The legal framework can be found in 8 Code of Federal Regulation, Part 207 – REFUGEES

Refugee | Definition of Refugee by Merriam-Webster

UNHCR also recognizes people who refuse to return to their country of origin as ‘stateless’.1

The main news media, and the misinformation being spewed out by immigration advocates and cable news pundits are intentionally misleading the public in the current “caravan” event and ignoring deliberately, the established legal framework.

The public has yet to hear or to discover the potential ability of at least 6 U.S. government agencies that are structured to handle the hyped-up dangers of a reported 14,000 and much more people that threaten to break into the U.S. southern border from Mexico.2

The mainstream  media would have one believe what ‘they report rather than what one actually sees with their own eyes. 3

Where is the High Commissioner for Refugees who is mandated by the United Nations to lead and coordinate international action for the worldwide protection of refugees and the resolution of refugee problems, such as the current human threats created by corrupt politicians and government officials?

UNHCR’s primary purpose is to safeguard the rights and well-being of refugees.

They have jurisdiction in this particular matter.

Yes, this means regardless of where ‘stateless’ individuals originate.

Where are the UNHCR refugee camps in and around Mexico; UNHCR food; clothes; and medical assistance for the sick children and mothers?

Where is the pressure on not just foreign officials, but our own government questioning the United Nations inaction toward their responsibilities and obligations?

Our current political bickering does not ignore or obliterate the UNHCR responsibilities.

The UNHCR and main media own this disaster, and they must be held accountable.

The news reports of the human wave of those escaping misery is made for TV drama by the media, totally ignoring the raping of women and children, sex slavery, murder and abuse that is mainly allowed to be buried by the main media and government officials of Honduras, El Salvador, Guatemala, and Mexico.

Why should these nations feed and care for their own citizens if they can simply push them out?

Why is this occurring now, you may ask?

The answer is simple.

One of the objectives of some politicians was the total destruction of the US Immigration Service (INS), that began in earnest after September 11, 2001.

You need no-more proof than a skilled observation of the Department of Homeland Security, lack of USCIS efficiency.

Why do we currently have this human ‘exodus and invasion’ situation?

The Immigration and Naturalization Service (INS) has not existed since March 1, 2003.

On that date, most INS functions were transferred from the Department of Justice to three new components within the newly formed Department of Homeland Security.

USCIS is one of those three components. U.S. Immigration and Customs Enforcement (ICE) and U.S. Customs and Border Protection (CBP) are the other two.

It was politically easy to facilitate the elimination of the USINS in March 2003 and replace it with what was a management of convenience.

Now we are dealing with the chaos that act helped create.

Why is USCIS burying its head-in-the sand in this situation?

How is it that the current Director of USCIS is not heard from in the current news cycles?

Instead, leading the news cycle on the caravan pending immigration disaster is the Secretary of Homeland Security; who is clueless about the pending real disaster.

US Custom Border Protection (USCBP); is made up of the previous U.S. Customs management who knew nothing of Immigration laws as cited in the 8 CFR.

Most of the legacy INS supervisors, and managers have long-left the USDHS.

U.S. Immigration Customs Enforcement (ICE) is made up of want-to-be ‘Investigators’ that was bumped out by the FBI (Federal Bureau of Investigations).

ICE has jurisdiction of criminal foreigners; domestic and international.

U.S. Citizenship and Immigration Services (USCIS) is totally ignored by the U.S. government officials, and institutionally sealed into silence.

This organization was publicly stripped of all enforcement, and silenced by immigrations advocates, and destroyed for political reasons.

All INS lawyers ended up at the Department of Justice.

When was the last time you can recall the Director of USCIS used a public format to voice any opinion of U.S. Immigration laws regarding Asylum and Refugee?

What about speaking about the caravan?

Like it or not, the USCIS is the central core to solving what is happening south of the U.S. border today.

ICE, CBP. the Military, or the FBI are clueless on solving the Southern invasion by poor people fleeing corruption, and mayhem.

USCIS should coordinate all UNHCR resettlement interviews in Mexico through the UNHCR.

It’s only going to take one mistake on our side by one young solider on the border for this situation to negatively publicly explode in our face; then the finger pointing will begin.

Avoid this inevitable potential disaster by putting USCIS lead into the mix of active immigration to begin fixing the necessary immigration and allow it to coordinate with the UNHCR the vetting of Refugees through the appropriate process that was established a long time ago.

That administrative process was effective in Asia, Indonesia, Australia and the rest of the world through the 70s, 80s and 90s.

Refugees are seeking a better life, some with families and some without.

Our bright economic future is what is drawing those mostly seeking their dreams.

They are driven by economic and social desperation.

Among them, are some criminals, and terrorists.

However, these cases can mostly be appropriately vetted.

The United States Refugee Admissions Program (USRAP) is comprised of:

The UNHCR is responsible for this mass group of people, the group is considered intending pursuant to the ‘refugees’ definition.

We coordinated this with the UNHCR for the Vietnamese in Thailand, Hong Kong, Australia and Europe.

The UNHCR provides protection, interviews all potential refugees and makes referrals to the appropriate Embassies in Mexico.

The UNHCR was created in 1950, during World War II.

That helped millions of Europeans who had fled and became stateless. Let’s not reinvent the wheel with today’s situation (www.unhcr.org/en-us/history-of-unhcr.html).

Vetting the Refugee group inside Mexico City. Assigning Asylum officers from the Western Region would be better suited for this purpose.

It also would be less costly and encourage the corrupt politicians from those respective mentioned countries to take control of their respective citizens.

It would also encourage Mexico, Honduras, Guatemala, and El Salvador to enforce their own crime and migration issues.

More humanely, this kind of UN program in Mexico would provide care for those that are truly sick, provide food, and vet the criminal element; legitimate refugee claims, and provide resettlement recommendations to all the Embassy nations represented in the country Mexico.

This has successfully been completed in other global areas.

Is the ‘refugee’ problem going away anytime soon?

Not if the current ineffective ad hoc policies and procedures continue.

Success through the UNHCR program has proven it can work serving all stakeholders.

In the long-run the benefits will be more pressure on the countries in Mexico, South and Central America to address and resolve the crime, violence, corruption and chaos within their respective ranks.

Avoid the chaos, and get on the path of resolution and application of our laws and empower the proper agencies to deal with the crisis.

Jose R. Olivares is a Founding Member of the US Department of Homeland Security March 2003

A Honduran migrant, part of a caravan trying to reach the U.S., yells as he storms a border checkpoint, in Ciudad Hidalgo, Mexico October 19, 2018.