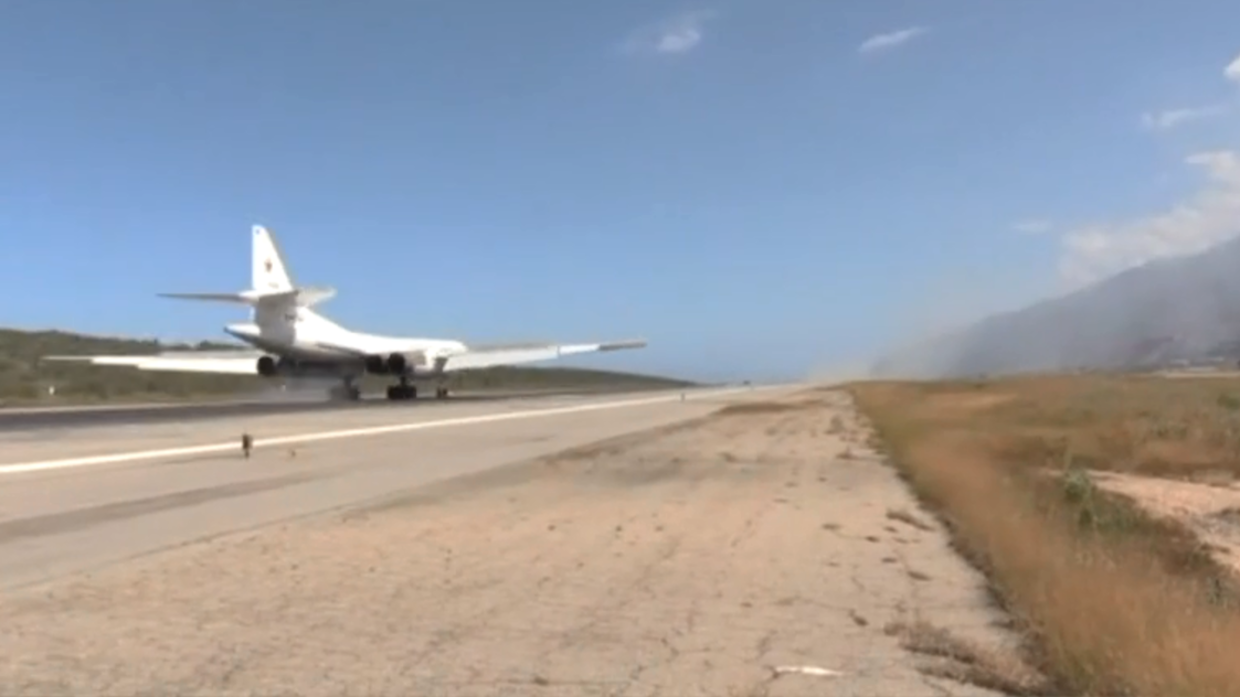 There was a time when the mere mention of a projected Russian (or Soviet) air or naval base in Latin America would have immediately generated a firestorm in Washington. Those times are now long gone.

The announcement that Russia is obtaining a long-term base on the island of La Orchila some 160 miles from Caracas and the home of a Venezuelan airfield and navy base generated some loud diplomatic exchanges with Washington but nothing much after that.

Indeed, the Washington “commentariat” yawned or completely overlooked this story.

Nevertheless, this is a portentous event.

The relatively sparse news reporting around this story and the flight of two nuclear-capable TU-160 bombers to La Orchila revealed that Venezuelan dictator Hugo Chavez offered it to Moscow ten years ago and that Moscow, though it did not accept the offer then, retained its interest in the base.

Moscow’s efforts to help Venezuela stave off its creditors, by buying equity in Venezuelan energy, and assistance to Caracas to rearrange its finances had as its ultimate payoff the creation of a base for Russian forces, either naval, or as has turned out, an air base.

Although Venezuelan law prohibits permanent foreign bases this will be a “temporary’ base that will allow Moscow to conduct aerial refueling whenever it undertakes a patrol mission in the Americas and the Caribbean if not further afield.

While it is a ‘temporary’ base, it is likely to undergo further extensive development, and in line with Russian planning we can expect air defense units to come along with fuel and munitions depots since a small base will not accommodate Russian needs as Russia moves towards permanent projection of its power in the Americas.

Indeed, Russia openly proclaimed its interest in naval and air bases in Latin America and specifically Venezuela in 2014. And, along with the air base it has apparently gotten the right to make port calls here.

In other words, it has begun to cash that hitherto unredeemed check. In fact, earlier in 2018 Venezuela’s Defense Minister, Vladimir Lopez told his Russian counterpart Sergei Shoigu, that Venezuela aspired to go beyond arms sales to operational level cooperation.

This raises the question of what operations these governments are thinking about, where they might take place, and against whom might they be directed?

Nevertheless U.S. commentary on this base tended to downplay its importance and emphasized the difficulties Moscow would have in outfitting TU-160s for missions against the U.S. given this system’s age, vulnerability to U.S. systems and need for fighter cover that itself would then need aerial refueling.

But such complacency or neglect is unwarranted. Apart from wanting to demonstrate its power and willingness to bail out friends in Latin America Russia’s acquisition of this base and its deployment represent something like the nose of the camel inside the tent.

In other words, it is a harbinger of developments to come. Moscow has been interested in Latin American bases for at least a decade.

It is quite likely, then, that over time more forces and weapons will be brought into that base as Moscow’s hold over Venezuela continues along with the latter’s isolation on the Latin American continent due to its nightmarish misrule.

Second, Russian commentators openly stated that this would be the beginning of Moscow’s nuclear retaliation against the U.S. for its intention to leave the INF treaty.

Accordingly, we can expect regular visits by nuclear-capable planes and ships to the neighboring naval base if not permanent deployments since a precedent has been set unlike 1962 and 1969.

This will also signify to many different audiences that Moscow is fully capable of playing in Washington’s “backyard” as it alleges the U.S. is doing to it, e.g. in Ukraine.

There are even reports of Moscow, through low-level contacts, offering Washington a trade, namely we will stay out of your backyard if you get out of Ukraine.

Furthermore, the deployment of the TU-160s and the establishment of a base to host them is only part of a larger multi-domain Russian strategy to display its bona fides as an adversary of the United States to Latin American governments, a posture that plays well in many Latin American countries.

Moscow is not content to deploy military power to Latin America. Apart from these planes and the base, the Eurasian Economic Union, Moscow’s instrument for economic integration of the former USSR, has just signed a trade memorandum with Mercosur, the Latin American economic union.

Moscow is also discussing the sale of nuclear reactors to Argentina, again not just to establish mutually beneficial trade relations in a sector where it has global standing, but also to gain lasting economic and political influence there and throughout the continent.

In other words, this deployment and air base are not a one-off deal but part of a larger, long-term, and well-established continental strategy for Latin America that comprises all the instruments of power available to Moscow.

This base marks the continuation, not an end, of a heightened stage of Russian involvement in Latin America and if we continue to ignore it we do so not only at our own peril but at the peril of our Latin American allies.

Venezuela’s crisis has long-since become a continental crisis, even leading some Latin American leaders to suggest unseating the Maduro government there by force. Those might be the threats invoked to justify a Russian base.

But for Moscow Venezuela’s crisis, amid the globally spiraling derangement of U.S. policy, represents too good of a pretext to renounce. In this respect Moscow has learned from Rahm Emmanuel, Mayor of Chicago and former White House chief of Staff, that “a crisis is a terrible thing to waste.”

Stephen Blank is a Senior Fellow with the American Foreign Policy Council.

The question of basing in the context of evolving 21st century military capabilities is one which we are paying a great deal of attention to.

Basing is changing in terms of what one might want from a base to be used in a crisis and to provide options for sustained engagement. Mobile basing is becoming a key element of shaping effective defense strategies as well.

The Russians are clearly working on diversifying their bases so as to have multiple access points from which to influence crisis events.

For example, the militarization of the Arctic is really about building a diversity of bases from which the Russians could deploy force in a crisis.

Bases in Latin America will not need to be built in the older model of having a substantial permanent presence but to be used in times of crisis to support rotational force as part of a crisis management strategy.

Venezuela is a brooder consideration. While the focus on Iran, China and other strategic competitors has tended to focus on regions far from the United States, the Chinese, the Iranians and the Russians have parked themselves within Venezuela which is less a state than a piece of geography run by thugs.

Nonetheless, it is part of the direct defense challenge being faced by the United States and if the President does draw down our engagement in Afghanistan, we might pay a great deal more attention to the challenge much closer to home.

Undoubtedly, the thugs who run Venezuela are hoping that a Russian presence would deter the US from actually dealing with them directly and hence is part of what they would perceive to be a deterrence effort as well.

According to the Russian media source RT, the establishment of the base provides a Putin response to the US position that the US will leave the INF treaty.

As Washington is determined to leave the landmark INF Treaty, it seems Moscow is looking for a response. Russian media has cited diplomatic sources as saying that Moscow is eyeing a strategic air base off Venezuela’s coast.

The arrival of two Russian Tu-160 strategic bombers to Venezuela earlier this month has provoked a nervous reaction from Washington and led to a brief heated exchange between the US and Russian officials. This might have been a prelude to a more ambitious endeavor, Russia’s Nezavisimaya Gazeta (NG) daily revealed, citing military and diplomatic sources.

Sources told the paper that Moscow seeks to create a semi-permanent base for the Russian long-range aviation on one of Venezuela’s islands in the Caribbean Sea as it prepares for “long-time military presence” in the US ‘backyard’.