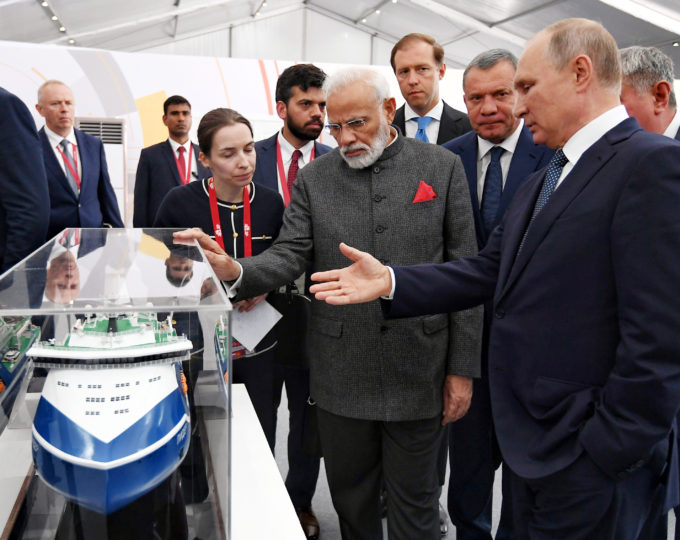 The 36-hour visit by Prime Minister Narendra Modi to Vladivostok, Russia on September 4-5 to participate in the 20th Annual Summit and as Guest of Honour in the 5th Eastern Economic Forum (EEF) at the invitation of President Vladimir Putin provided, in PM Modi’s own words, “a new direction, new energy and new speed” to relations between the two countries.

The strength and resilience of India-Russia relations can be appreciated from the fact that bilateral Annual Summits have been held every year without fail since the time they were first launched in 2001 by President Putin and Prime Minister Atal Bihari Vajpayee. The two countries entered into a Strategic Partnership at that time. With no other country does India have such a long-standing tradition of holding Annual Summits. PM Modi made a poignant reference to his first meeting with President Putin during his visit to Russia as Chief Minister of Gujarat in 2001 with PM Vajpayee.

This was the fifth visit by PM Modi to Russia since he assumed power in 2014. Relations between the two countries were seen to have become listless at the beginning of PM Modi’s first term because of India’s perceived growing closeness to USA, and Russia’s increasing dependence on China as well as its expanding flirtations with Pakistan including in arms supplies.

Russia’s decision to engage in military exercises with Pakistan, (first reportedly in POK but later clarified that they were conducted in Khyber Pakhtunkhwa), immediately after the Uri attack by Pakistan in September, 2016 represented a low point in bilateral understanding.

Relations witnessed an upsurge after the informal Summit between the two leaders in Sochi in May, 2018. Since then PM Modi and President Putin have met several times including at the G-20 Summits in Buenos Aires in November, 2018 and in Osaka in June, 2019 in a trilateral format with Chinese President Xi Jinping; in SCO Summit in Bishkek, Kyrgyzstan in June, 2019, and at the bilateral Summit in New Delhi in October, 2018. The current visit injected a huge energy to the partnership.

PM Modi is the first Indian PM to visit Russia’s Far-East although India’s relations with the region go back a long-time as India was the first country to establish its Consulate in Vladivostok in 1992.

Significance of PM Modi’s visit needs to be assessed in the context of the reassuring statement by Russia just before the visit that it considers the revocation of Article 370 as an internal matter of India and that all issues between India and Pakistan be settled bilaterally through dialogue.

This articulation was particularly encouraging as it came in the wake of some confusing remarks by the Russian Deputy Permanent Representative in New York just prior to the informal consultations in the UN Security Council on 16th August that issues between India and Pakistan should be resolved on the basis of Simla Agreement, UN Charter and relevant UN Resolutions.

The Joint Declaration at the end of the bilateral visit titled ‘’REACHING NEW HEIGHTS OF COOPERATION THROUGH TRUST AND PARTNERSHIP’’ clearly refers to the ‘’inadmissibility of interference in the internal affairs of Member States.’’

Several momentous decisions were taken by the two countries to significantly bolster their bilateral relations. Reinforcing trust was identified by PM Modi as the most significant achievement of the visit.

Speaking at the EEF, PM Modi announced extension of $1 billion line of credit to the Russian Far-Eastern Region to promote India’s economic engagement with that region. It is for the first time that India has provided such a facility to a specific region of a country rather than to the whole country.

Cooperation in Russia’s Far-East is a win-win proposition for both India and Russia. President Putin started developing this region seriously about 5 years ago, both because the centre of gravity of the world economy is shifting from Europe and America to Asia, as also, because of the crippling sanctions imposed by the West on Russia in 2014 in the wake of the Ukraine crisis and referendum in Crimea to unite with Russia. Russia would like the Far-East region to be developed as it is extremely rich in mineral resources like oil, gas, diamonds, rare-earths, timber etc, with a huge area of more than 6 million sq km and a low population of about 8 million.

Russia is also apprehensive of the increasing political, economic and military assertiveness of China as well as its growing investment in that region and presence of the very large Chinese population just South of its border. India is keen to enhance its economic and commercial exchanges with Russia because, notwithstanding the special and privileged strategic partnership, bilateral trade between the two countries is languishing at $11 billion.

Moreover, India is deficient and in critical need of all the mineral and hydrocarbon resources that are available in plentiful in the region.

Both countries reiterated their resolve to expand bilateral trade to $30 billion by 2025. A 5-year long road map on cooperation in hydrocarbons was signed to bring bilateral relations in this crucial sector to a significantly higher level.

Connectivity was another important issue of deliberations. A Chennai-Vladivostok maritime route will soon be established. This will help to carry Indian cargo via the Northern Sea Route (Arctic Route) to Northern European countries as against the much longer and more expensive route through the Arabian Sea, Red Sea, Suez Canal, Mediterranean Sea and the Atlantic Ocean.

The proposed route via Vladivostok would be more economical in duration and distance of travel as compared to the existing route. Launching the ‘’Act Far East’’ Policy, PM Modi said that henceforth Vladivostok would serve as the springboard for India to invigorate its connect with countries in this region.

In his Address at the 5th EEF, PM Modi spoke at length on the possibilities of man-power exports from India. He said that Indian white- and blue-collar workers around the world have distinguished themselves by their discipline, integrity, sincerity, commitment and honesty. Their presence in this sparsely populated region would fulfil a much-felt need.

Several Agreements between the governments and business entities of the two countries spanning the fields of nuclear and non-nuclear fuel and energy, manufacture of spare parts for Soviet and Russian defence equipment in India, railways, cooperation between different regions of India and Russia, development of the International North-South Transport Corridor, collaboration in Space and training of Indian astronauts for its first manned Space mission “Gaganyaan” in Russia, agriculture, tourism, education, healthcare, joint development and production of military equipment, components and spare parts, culture, films, visa simplification etc. were signed.

Production of Russian systems like helicopters, aircraft, assault rifles and their spares in India was on the agenda. Notably, a project to make nearly a million AK 203 rifles, an advanced variant of the famous AK 47 Kalashnikov assault rifle, has already been cleared and a factory is being set up in India’s northern state of Uttar Padresh.

In the comprehensive Joint Statement issued at the end of the Summit, the two leaders strongly condemned terrorism and vowed to fight against it. They asserted their resolve to expand cooperation in all regional and global fora like SCO, BRICS, RIC etc.

PM Modi took the opportunity of presence of President of Mongolia and PMs of Japan and Malaysia to hold discussions with them on advancing bilateral ties. Issue of extradition of Zakir Naik from Malaysia was raised with the Malaysian PM.

PM Modi’s visit to Vladivostok was short in duration but long on achievements and results.

Decisions arrived at between the two countries, both at government and private sector level, will provide a quantum jump in bilateral ties.

This article was published by our partner India Strategic in September 2019.

The featured photo shows Prime Minister, Shri Narendra Modi with the President of Russian Federation, Mr. Vladimir Putin visiting the ‘Street of the Far East’ exhibition, at Vladivostok, in Russia.