On Wednesday 13 September 1944, just a few days before operation Market Garden, a lone B-17G 42-97848 Silver Wings from the 92BG was returning from a bombing mission over Merseburg.

They were on their own because an engine had been knocked out by flak and therefore, they could not stay in the formation. Enemy fighters attacked several times killing and wounding crew members.

The pilot Jack Peck decided to try to make an emergency landing at the Belgium airfield Diest which was in allied hands.

Jack attempted to land but failed. He and six of his crew members were killed in the crash, two crew members survived.

Fast forward to 2019 and exactly 75 years later on Friday 13 September Sally B was in Belgium and scheduled to fly from Antwerp to the Sanicole airshow for an early evening display. 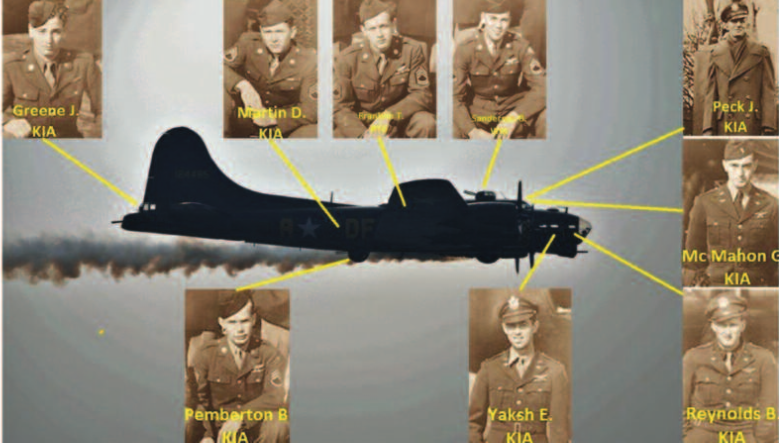 I know the area very well and have flown into Diest several times, but never realised what happened there in 1944 and that a small memorial commemorating the crew was hidden in the woods. 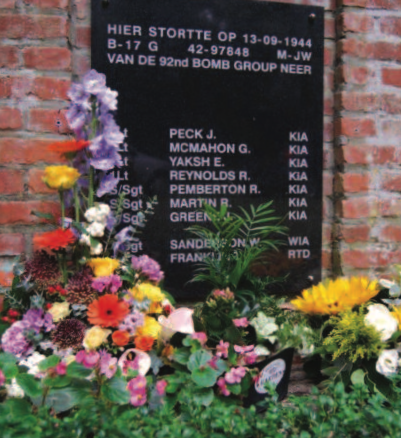 Luckily one of Sally B’s Belgian members Bart Beckers is involved in tending this memorial.

Bart had approached Elly Sallingboe and as the memorial was on our route and the flypast was not advertised, she decided that we should do this special Memorial Flypast.

Soon after our departure from Antwerp we were approaching the now military airfield Diest. When we asked air traffic control for permission to enter the military airspace initially we were denied.

However, a quick call on the local radio showed that the military had started the weekend early and the local flying club gave permission for us to continue as all their aircraft were on the ground (thanks guys!).

Before the flight I had programmed the GPS using Google maps which was a wise move because the memorial was not easy to find among the trees.

At 170 mph it was over in seconds, and although we could not see much, pictures from the ground showed we were spot on thanks to modern electronics.

With the flypast completed, it was now time for the Sanicole display. After the Nato Awacs had cleared the Sanicole area we were running in for Sally B’s display only minutes after the flypast.

Unfortunately, these days, it is complicated to carry out memorial flypasts in the UK.

We are partnered with them and urge our readers to support the Sally B in any they can.