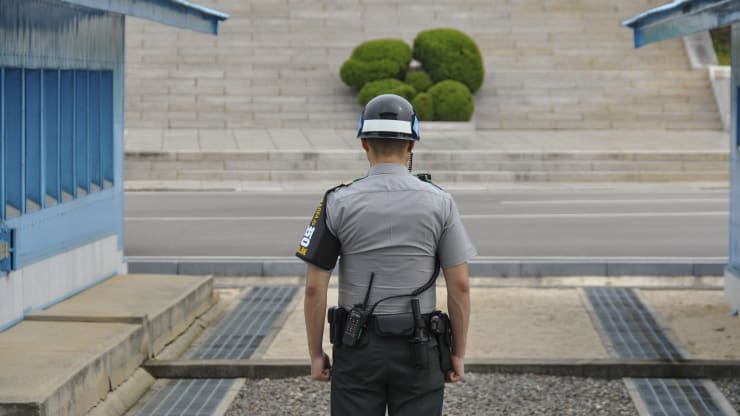 The last few days indicate that the most recent effort to build an inter-Korean peace regime will achieve as little success as earlier initiatives.

These all typically follow an inverted V-shape rise and abrupt fall.

On this occasion, DPRK officials, led by the sister of Supreme Leader Kim-Jong-un, have suspended all direct political-military communication with their ROK counterparts. This move follows the suspension of many economic projects earlier this year due to COVID-19 and an uptick in DPRK military activities along the inter-Korean border.

The immediate pretext for this week’s cutoff was the South Korean authorities’ failure to stop DPRK defectors in the south from launching balloons filled with anti-regime leaflets into the North.

However, since these deliveries have been going on for years, and the ROK government was preparing to stop future ones for reasons of national security, we naturally must look for other reasons for the hardening line in Pyongyang.

Plausible factors could include the DPRK regime’s desire to distract its peoples’ attention from problems at home due to COVID-19 and economic setbacks, DPRK leadership maneuvering to raise the profile of Kim Yo-jong, and the failure to divide the government of Moon Jae-in from the Trump administration over the former’s desire to relax some intra-Korean sanctions to promote inter-Korean dialogue.

Not only has the Trump administration declined to soften its position on denuclearization, but the ROK government has been both unable to soften Washington’s line and unwilling to break with the US over the issue.

Moon’s holding the line has kept intra-Korean commerce and South Korean humanitarian assistance at minimal levels, depriving Kim of the benefits he hoped to achieve through his campaign of diplomatic outreach in 2018 and 2019.

Efforts towards establishing a peace regime on the Korean Peninsula have gained periodic traction.

The peace regime concept has evolved over the years, with various iterations, but it envisages a condition in which the danger of war on the Korean Peninsula would be significantly reduced through enhanced mutual trust and confidence, legal and institutional structures, formal declarations and agreements, and less formal norms, rules, processes.

The concept can be found in the Agreement on Reconciliation, Non-aggression and Exchanges and Cooperation between the South and the North (1991), the Declaration on the Advancement of South-North Korean Relations, Peace and Prosperity (2007), as well as in the Four-Party Talks (1997-99) and the Six-Party Talks (mid-2000s).

The issue has gained renewed attention since the president Moon made his “Berlin Initiative for Peace on the Korean Peninsula” in July 2017.

Other inducements to coax the regime out of its self-destructive isolation and to reassure the DPRK leadership about its security consisted of encouraging other countries to engage with North Korea, providing increased humanitarian and economic assistance, and postponing negotiations on the most difficult issues dividing the two countries. The first-ever inter-Korean presidential summit occurred in June 2000.

When Roh Moo-hyun was elected president in 2003, he largely continued these engagement and aid policies during his five-year term, under the renamed “Peace and Prosperity Policy.”

The Roh administration also wanted to promote DPRK economic reform and, simultaneously, integrate the country into East Asian economic processes, hoping that such developments could help stabilize North Korea in the short-term while providing incentives and leverage for moderating its foreign policy over the long run.

Roh and Kim Jung-il signed a joint presidential declaration at the second inter-Korean summit in 2007 to promote commercial cooperation.

The Sunshine approach implicitly assumed that the DPRK regime would not soon collapse and that Pyongyang would alter policies that most threatened South Koreans.

During the decade of the Sunshine Policy, North Korea conducted two nuclear tests, two long-range ballistic missiles tests, and multiple short-range tests, and also pursued an alternative nuclear weapons program. No progress was made in the DPRK’s human rights practices.

The biggest blow to the policy occurred in 2006, when North Korea conducted an underground nuclear test. Subsequent revelations about ROK side payments, by major corporations such as the Hyundai Group as well as the ROK government, for the summits and joint ventures further discredited the policies.

The 2018 Winter Olympics at Pyeongchang, South Korea, provided an opportunity to relaunch diplomacy between the two Koreas, North and South Korean athletes marched under a unified Korean flag and fielded a united female ice hockey team.

Building on this momentum, a formal inter-Korean summit took place on April 27, 2018, at the Peace House in Panmunjom village. Since 2018, the two Korean governments have reached various economic, diplomatic, humanitarian, and security agreements.

However, as the U.S.-DPRK peace process stalled, so did the inter-Korean talks.

Moon has been trying to regain momentum in the peace process through his “five-point proposal” to improve inter-Korean relations made in his New Year’s address on January 7, 2020.

After Moon’s party won the April elections for the National Assembly by a large margin. the Unification Ministry even began discussing rescinding the “May 24 measures” banning inter-Korean exchanges and other cooperation. These were adopted following the North’s 2010 attack on the South Korean warship Cheonan and other provocations.

But the DPRK insists on near-term sanctions relief and sees denuclearization as a product, instead of the cause, of improved relations between Washington and Pyongyang.

The United States insists on reversing this sequencing of denuclearization and sanctions relief.

Photo source from the following story: