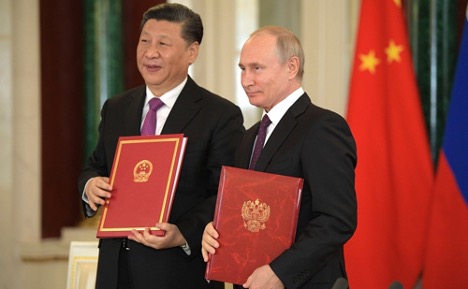 While there’s still some debate about whether the world is entering a new era of ‘Pax Sinica’ in the aftermath of the Covid-19 pandemic, it does appear that we’re witnessing the emergence of a more aggressive and assertive China that is intent on exploiting the geopolitical and economic upheaval resulting from Covid-19 to protect its perceived interests and advance its agenda.

An emboldened China will particularly pose a number of critical security challenges for Russia over the next decade, and decision-makers in the Kremlin may find themselves asking whether the long-term costs associated with its partnership with China outweigh identified benefits.

As noted elsewhere, while Moscow clearly stands to benefit from its relationship with Beijing, it ‘must take care to preserve its full sovereignty and independence’. The problem for the Kremlin in a post-pandemic world is that it’s not certain that it has the means to do so.

Even before the Covid-19 crisis, Moscow’s agreement to the 2019 comprehensive strategic partnership with Beijing meant that it was already on track to join a Sino-centric power bloc, albeit as a junior partner. But the pandemic has exacerbated the asymmetrical nature of this partnership by making Moscow potentially dependent on Chinese investment for infrastructure development and on Chinese markets for natural resources.

As with most countries experiencing Covid-19 outbreaks, Russia’s economy has been devastated by shutdowns caused by the pandemic. That economic pain has been further exacerbated by the associated collapse in the price of oil.

But the pandemic’s ramifications for the Kremlin and Russian President Vladimir Putin may be even more consequential—the economic and social impacts have exposed the limits of the Russian state and potentially widened cracks in the foundations of Putin’s power. Putin has also gone missing in action during the height of the crisis, undermining his personal approval rating.

It is in this context that the Kremlin and Russian elites are pinning ‘their hopes on the proposition that China will roll out massive measures to support [Russia’s] tumbling economy and prevent growing unemployment from causing social unrest and will continue government-driven spending on construction and infrastructure, including accelerating [the] rollout of 5G networks, giant data centres, and more’.

In doing so, not only will the Kremlin be straying further into the realm of potential debt dependency on Beijing, but it will also inevitably be negotiating with Beijing on the rules for investment from a position of weakness. As a consequence, Moscow may ultimately end up paying a high price—including its intellectual property, advanced military capabilities and ultimate control over its natural resources—in order to obtain much-needed Chinese investment.

The problem for Moscow is that Chinese investment will come on China’s terms and Beijing will likely have a Plan B in its investment strategy that mitigates the risks associated with investing in Russia’s corrupt and volatile economy.

Prior to the pandemic, Moscow was already potentially exposed to Chinese industrial espionage as a result of a ‘high-tech partnership’ with Beijing that covered cooperation and investment in telecommunications, artificial intelligence, robotics, biotechnology, new media and the digital economy.

Moscow had also provided Beijing with a critical foothold in Russia’s telecommunications infrastructure, including through the establishment of a China Telecom office in Vladivostok dedicated to providing telecommunications infrastructure for private, commercial and government customers across the Russian Far East. Beijing will look to capitalise on this inroad post-pandemic and is also reinvigorating its planned expansion of 5G infrastructure along the Digital Silk Road, which will straddle Russia, Central Asia and much of Europe.

Beijing is also well positioned to exploit the Kremlin’s desire to use the pandemic as justification to roll out pervasive Chinese Communist Party–style surveillance infrastructure across Russia. Ironically, this infrastructure will depend upon Chinese hardware, artificial intelligence and facial recognition technologies, providing further opportunities for Beijing to gain covert access to Russian critical national infrastructure.

In exposing itself to these risks, Moscow appears to have learned nothing from the experiences of the West in dealing with industrial-scale theft of intellectual property and sensitive information by China. The Kremlin also appears to have ignored warnings from Russian officials on the risks in reliance on Chinese technologies and the perils of granting Chinese telecommunications companies privileged access at the heart of Russia’s developing 5G telecommunications infrastructure.

In the short term, an increase in Chinese investment, telecommunications technology and markets for Russian natural resources will clearly provide significant economic benefits during the post-pandemic downturn. But Russia’s decision-makers should acknowledge that the current entente with China may not prove sustainable and they should be considering what will happen if their country’s strategic interests diverge from China’s.

The Russian–Chinese partnership is still best categorised as an ‘axis of convenience’ founded on mutual antipathy towards the US and a desire to counter US hegemony. But the key problem for Moscow is that the partnership is an increasingly asymmetrical one that is providing Beijing with expanded leverage over the Kremlin.

And by welcoming Chinese companies into Russian communications infrastructure, Moscow is also potentially providing Beijing with access to Russia’s critical national infrastructure in a way that will be difficult to wind back.

Somewhat ironically, as its relationship with Beijing has become more asymmetrical, Moscow has become more suspicious about Chinese motives and concerned about Beijing’s leverage over it. But this suspicion is nowhere evident in the decisions Moscow is taking on Chinese investment in Russian critical national infrastructure and collaboration on technology and the digital economy.

In time, Russia’s suspicions of China’s intentions may ultimately prove to be well founded and the Russian bear may find itself dancing to Beijing’s tune.

Connor Dilleen has worked for the Department of Foreign Affairs and Trade and the Office of National Assessments. He currently works for Australia’s privacy regulator. This article represents the author’s personal views and does not necessarily reflect the views of the Australian government.