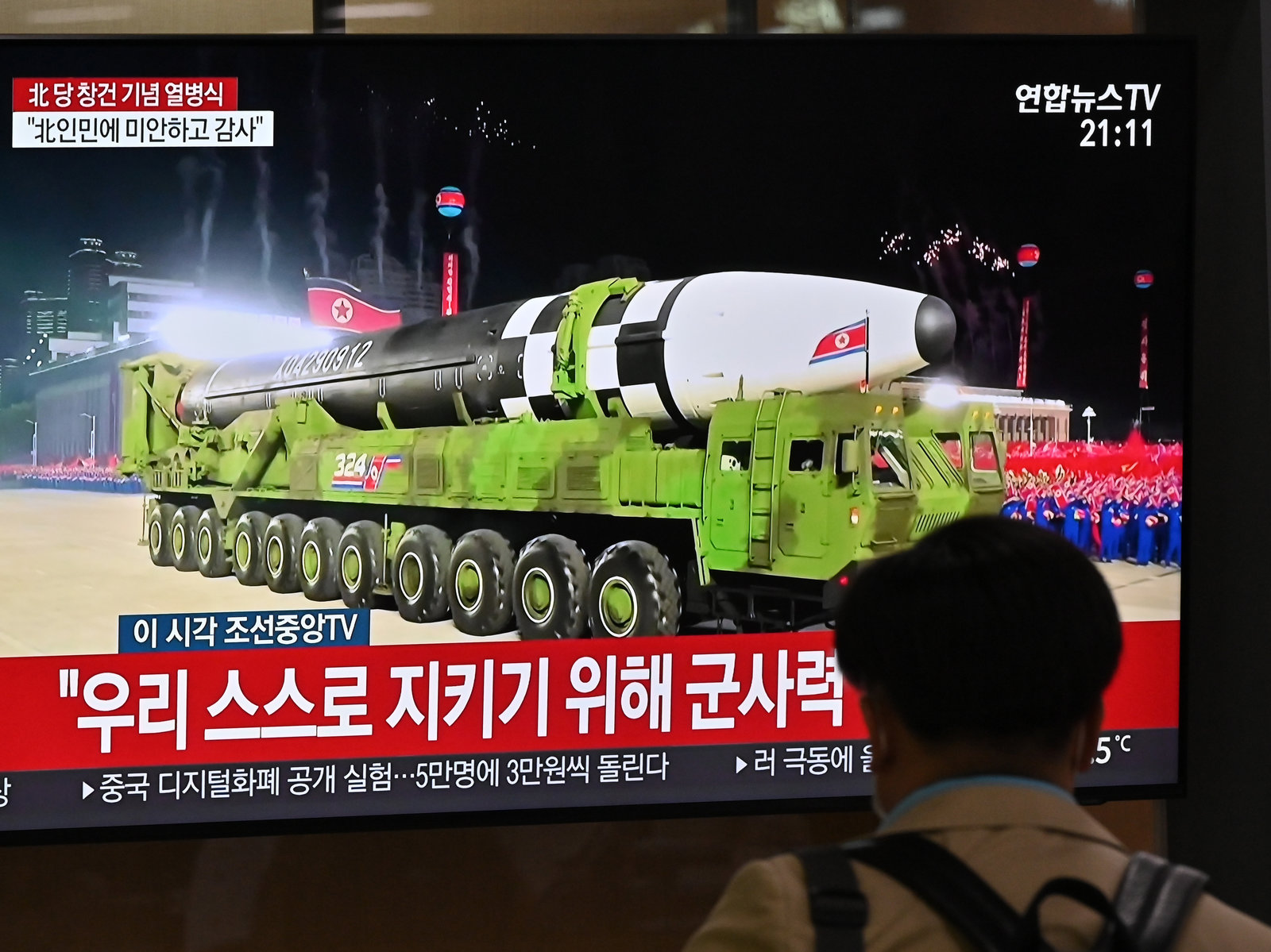 This past weekend’s military parade in North Korea, marking the 75th anniversary of the founding of the Korean Workers Party, makes clear that whomever is elected U.S. president next month will need to address the growing missile threat from the Democratic People’s Republic of Korea (DPRK).

On the surface, the parade stood out for its flamboyant Hollywood-style chorography—far more elaborate than previous years. But the annual parade has been especially useful as an indicator of DPRK military capabilities. From what was on display, these capabilities clearly have been growing, as DPRK leader Kim Jong Un pledged they would.

The regime has apparently been able to acquire sufficient funds through cyber theft and other illicit means to modernize both its nuclear and conventional forces, despite comprehensive international sanctions, the closing of the DPRK’s borders to block importation of COVID, and the ensuing collapse of North Korea’s legal international trade.

The parade is particularly important for shedding light on North Korea’s long-range missile capabilities since the DPRK has ceased testing these systems in recent years. North Korea test-launched more than two dozen missiles last year, but none had the range to reach the United States, though a Hwasong-15 tested in 2017 had could have flown an estimated 13,000km if pointed toward North America.

On the occasion of this year’s exercise, the DPRK displayed both a new submarine-launched ballistic missile (SLBM) and the world’s largest road-mobile intercontinental ballistic missile (ICBM). The current operational status of both new systems is unclear since they have not been flight-tested, but the two systems seem to build on DPRK’s already proven missile capabilities.

The SLBM, labeled the Pukguksong-4A, seems to be an evolution, and perhaps a replacement, for the Pukguksong-3 tested last year from a submerged barge. Since the latter was not paraded this weekend, the Pukguksong-4A, which presumably has more advanced capabilities such as a longer range, may be the DPRK’s preferred version going forward.

The new ICBM appears to be a larger version of the Hwasong-15. Both missiles are liquid-fueled, carried by huge transporter-erector-launchers (TELs), and designed to deliver a nuclear warhead against the United States. Besides its shock value, the advantage of the larger system presumably lies in its ability to carry a larger payload of warheads, penetration aides, and other weaponry. The appearance of the new, apparently indigenously manufactured 11-axle TEL is particularly worrisome since North Korea’s limited number of transport vehicles capable of carrying such enormous missiles has restricted its number of mobile ICBMs.

Having missile launchers that can travel on land or under the ocean is advantageous since these systems are harder to detect and can attack targets from multiple paths. For example, a SLBM could strike targets in South Korea from the East or West Seas, circumventing South Korean defenses directed against missiles arriving from a northwardly trajectory. Pyongyang strives for means to destroy any U.S. city to deter the United States from defending potential targets of DPRK aggression, such as Japan or the Republic of Korea (ROK).

In his speech at the parade, Kim described North Korea’s missile fleet as primarily a defensive deterrent to avert war. Yet, the next U.S. presidential administration and Congress will prudently need to consider means of strengthening U.S. defenses against such menacing weapons.

It is unlikely that sanctions or diplomacy will resolve this problem soon. Further, neither tolerating a mutual deterrence relationship with the DPRK or launching preemptive strikes is prudent. The next U.S. administration will therefore need to assess means to improve U.S. and allied defenses and deterrent capabilities as well.

The current fleet of a few dozen Ground Based Interceptors (GBIs) in Alaska and California offers the only means of protecting the continental United States from DPRK missiles. These systems were rushed into service almost two decades ago and suffer from aging technologies, patched upgrades, and infrequent tests. The United States desperately needs a more reliable kill vehicle to address the expanding North Korean missile threat.

Unfortunately, the failure of the multi-year effort to deploy a Redesigned Kill Vehicle (RKV) for the GBIs has upended the timetable for enhancing the fleet. The RKV was supposed to have improved data processing, communications, and target discrimination as well as a simplified design, improved reliability, and lower costs through improved management and a modular architecture.

But the Pentagon leadership canceled the RKV last year due to severe technical problems that would have been too costly and, in some cases, possibly impossible to correct. The cost of the RKV program had tripled over earlier estimates and its ever-receding deployment window alienated even its core supporters.

A comprehensive study by the U.S. Government Accountability Office (GAO) found that the RKK program suffered from severe design and manufacturing flaws, failures in systems engineering, and the inadequate competition and quality assurance of lead contractors. The attempt to use more commercially off-the-shelf parts and repurposed components from the Aegis Standard Missile-3 (SM-3) Block IIA, though admirably intended to employ proven technologies and keep costs down, proved especially problematic.

These flaws will need to be corrected if the Pentagon hopes to realize its goal of deploying a Next Generation Interceptor (NGI) by the end of the decade. Although the Pentagon sees the NGI as an entirely new system built from the ground up, the new interceptor, like the RKK, aims to provide cost-effective means to defeat even complex current and future missile threats. Fortunately, the Missile Defense Agency has committed to early and comprehensive parts testing, is refraining from trying to combine competing contractor designs into a single fused design, and will refrain from starting production of the NGI until its prototypes have at least two successful intercept tests.

Besides taking these steps, the Defense Department will need to consider means to accelerate the timetable for strengthening U.S. defenses. Testing GBIs more frequently and in more demanding scenarios—independently and in combination with other elements—will help both affirm the effectiveness of the upgrades and life-extension programs for the existing GBIs as well as develop new ones.

Furthermore, the Pentagon is correctly considering means to integrate regional missile defense systems, such as the Aegis-equipped Standard Missile interceptors and the Terminal High Altitude Area Defense (THAAD) system, with the GBIs into a multi-layered defense architecture against ICBM-class targets. This mix could specifically help shield Hawaii, Guam, and other U.S. territories beyond CONUS.

Since technology is breaking down differences between national and regional defenses as well as enhancing the capabilities of regional and unmanned systems, the Department should look also anew at means to intercept North Korean missiles in their boost phase, before they can deploy their decoys and other penetration aids. Cyber security will need to become an even more important priority given the evidence that the DPRK has developed some of the world’s most formidable offensive cyber capabilities.

The remarkable success of novel public-private partnerships in restoring U.S. space leadership suggests that the Pentagon could also make better use of American entrepreneurship in rebuilding its national missile defense architecture, especially by building better and more affordable constellations of integrated sensors. These can provide the continuous “kill web” needed to address the novel missile technologies fielded by North Korea and other potential U.S. adversaries.

Featured Photo: A man watches a news broadcast of a military parade commemorating the 75th anniversary of North Korea’s ruling Workers’ Party held in Pyongyang, at a railway station in Seoul.