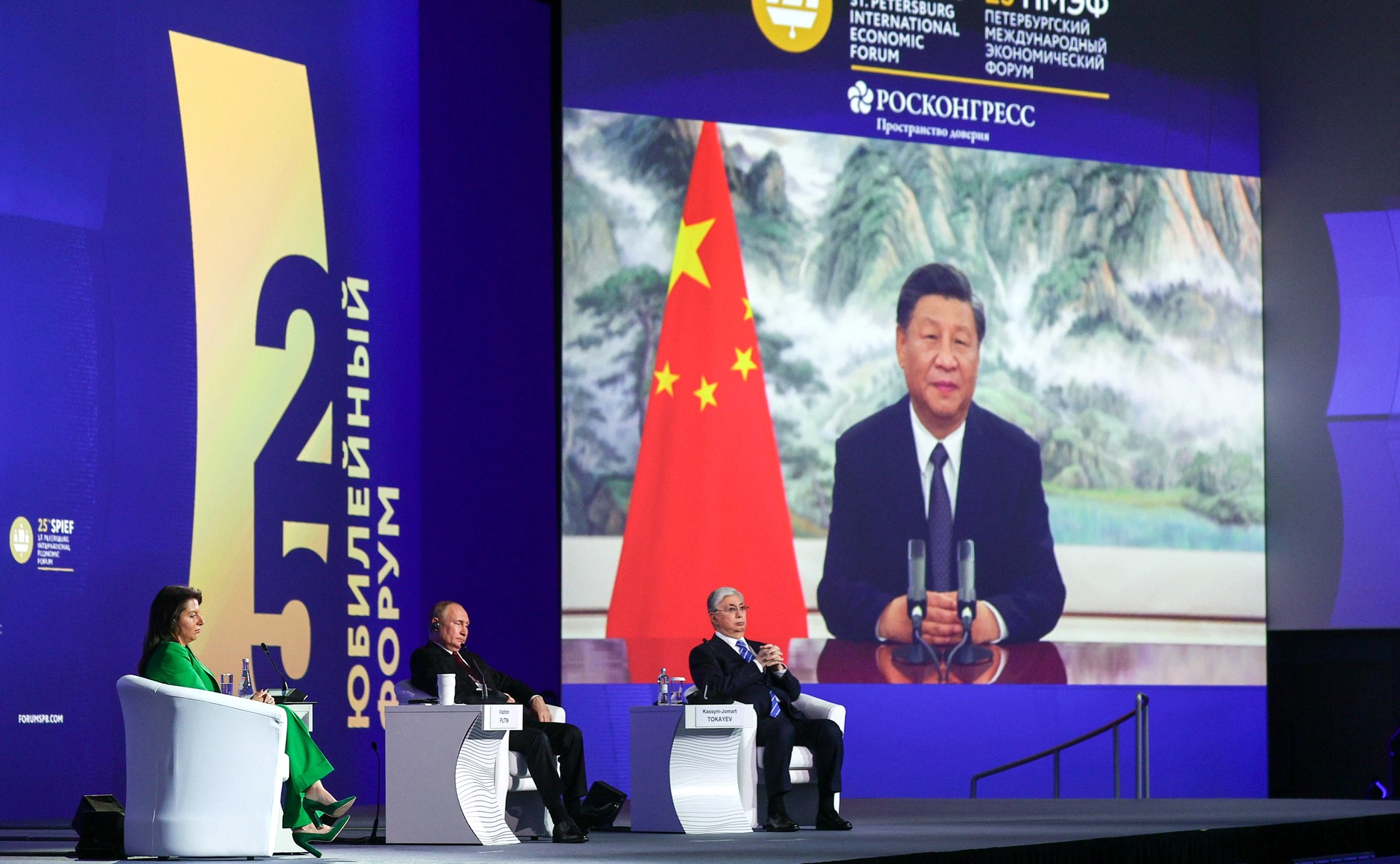 The featured photo shows Putin’s Chinese ally speaking by video link at the St. Petersburg. His presence even in this manner highlighted the importance of the Russian-Chinese relationship in the midst of the ongoing war in Ukraine.

Putin himself provided a speech designed largely for his domestic audience explaining the global and economic situation in which Russia finds itself in the midst of the war in Ukraine.

A DW story published on June 17, 2022 provided one of the better assessments of the speech.

During an address at the St. Petersburg International Economic Forum, Putin was unapologetic regarding what Russia terms its “special military operation” in Ukraine. “In the current situation, against a backdrop of increasing risks for us and threats, Russia’s decision to conduct a special military operation was forced — difficult, of course, but forced and necessary,” Putin said of the invasion, which began in February.

He repeated his claim that the invasion was primarily intended to “defend” Russian-speaking people in the eastern Donbas region of Ukraine.

Ukraine and much of the world counter that the Russian invasion is a lethal violation of international law, which aims to unsettle its neighbor, topple an elected president, and scare other former Soviet-era satellites away from seeking further integration with organizations like the EU or NATO….

The event in St. Petersburg, Putin’s hometown and the site of his first senior posting as a politician rather than an intelligence agent, is designed to be Russia’s answer to the World Economic Forum in Davos. However, the western companies and investors that turned up in previous years were conspicuously absent amid the war in Ukraine….

Juri Rescheto of DW’s Russian service pointed out that Putin’s speech to economic delegates was also an exercise in damage limitation amid severe upheaval, particularly for Russian businesses seeking to operate globally.

“Russia has never been punished with so many and such hard economic sanctions as this year. Never before have so many foreign companies left Russia — we are talking about more than 1,000. And because of this, Russia is looking toward the future with great concern and trying desperately to reorientate its entire economy,” Rescheto said, adding that the address “sounds very much like a speech aimed at the local audience in Russia.”

In the transcript released by the Kremlin, we have excerpted part of that speech which deals with his pitch to his domestic audience about the economic context faced by Russia in the context of the war in Ukraine.

When I spoke at the Davos Forum a year and a half ago, I also stressed that the era of a unipolar world order has come to an end. I want to start with this, as there is no way around it. This era has ended despite all the attempts to maintain and preserve it at all costs. Change is a natural process of history, as it is difficult to reconcile the diversity of civilisations and the richness of cultures on the planet with political, economic or other stereotypes – these do not work here, they are imposed by one centre in a rough and no-compromise manner.

The flaw is in the concept itself, as the concept says there is one, albeit strong, power with a limited circle of close allies, or, as they say, countries with granted access, and all business practices and international relations, when it is convenient, are interpreted solely in the interests of this power. They essentially work in one direction in a zero-sum game. A world built on a doctrine of this kind is definitely unstable.

After declaring victory in the Cold War, the United States proclaimed itself to be God’s messenger on Earth, without any obligations and only interests which were declared sacred. They seem to ignore the fact that in the past decades, new powerful and increasingly assertive centres have been formed. Each of them develops its own political system and public institutions according to its own model of economic growth and, naturally, has the right to protect them and to secure national sovereignty.

These are objective processes and genuinely revolutionary tectonic shifts in geopolitics, the global economy and technology, in the entire system of international relations, where the role of dynamic and potentially strong countries and regions is substantially growing. It is no longer possible to ignore their interests.

To reiterate, these changes are fundamental, groundbreaking and rigorous. It would be a mistake to assume that at a time of turbulent change, one can simply sit it out or wait it out until everything gets back on track and becomes what it was before. It will not. 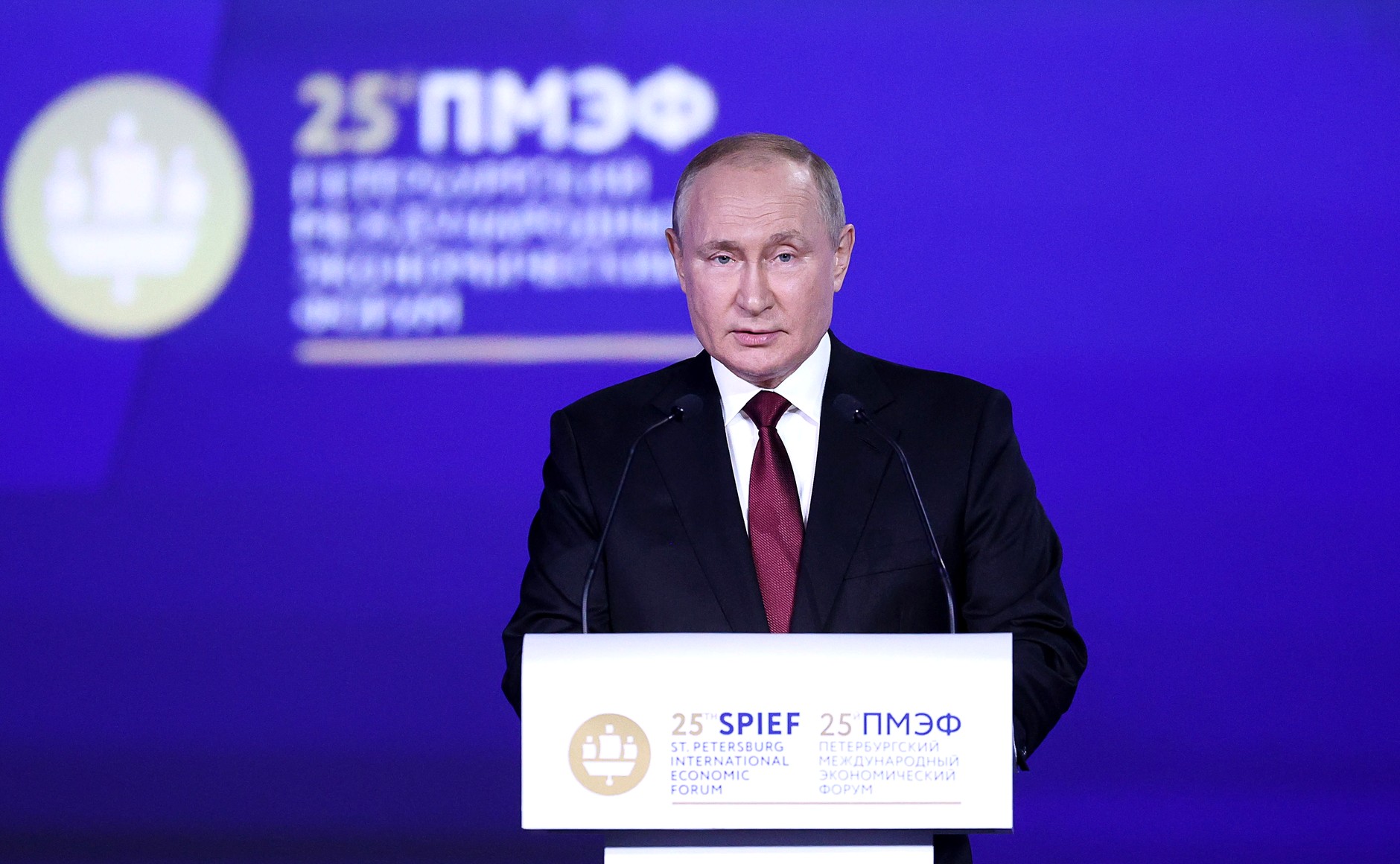 However, the ruling elite of some Western states seem to be harbouring this kind of illusions. They refuse to notice obvious things, stubbornly clinging to the shadows of the past. For example, they seem to believe that the dominance of the West in global politics and the economy is an unchanging, eternal value. Nothing lasts forever.

Our colleagues are not just denying reality. More than that; they are trying to reverse the course of history. They seem to think in terms of the past century. They are still influenced by their own misconceptions about countries outside the so-called “golden billion”: they consider everything a backwater, or their backyard. They still treat them like colonies, and the people living there, like second-class people, because they consider themselves exceptional. If they are exceptional, that means everyone else is second rate.

Thereby, the irrepressible urge to punish, to economically crush anyone who does not fit with the mainstream, does not want to blindly obey. Moreover, they crudely and shamelessly impose their ethics, their views on culture and ideas about history, sometimes questioning the sovereignty and integrity of states, and threatening their very existence. Suffice it to recall what happened in Yugoslavia, Syria, Libya and Iraq.

If some “rebel” state cannot be suppressed or pacified, they try to isolate that state, or “cancel” it, to use their modern term. Everything goes, even sports, the Olympics, bans on culture and art masterpieces just because their creators come from the “wrong” country.

This is the nature of the current round of Russophobia in the West, and the insane sanctions against Russia. They are crazy and, I would say, thoughtless. They are unprecedented in the number of them or the pace the West churns them out at.

The idea was clear as day – they expected to suddenly and violently crush the Russian economy, to hit Russia’s industry, finance, and people’s living standards by destroying business chains, forcibly recalling Western companies from the Russian market, and freezing Russian assets.

This did not work. Obviously, it did not work out; it did not happen. Russian entrepreneurs and authorities have acted in a collected and professional manner, and Russians have shown solidarity and responsibility.

Step by step, we will normalise the economic situation. We have stabilised the financial markets, the banking system and the trade network. Now we are busy saturating the economy with liquidity and working capital to maintain the stable operation of enterprises and companies, employment and jobs.

We have focused on Putin in detail in our book published last year on the return of direct defense which certainly presaged his current actions in Ukraine: