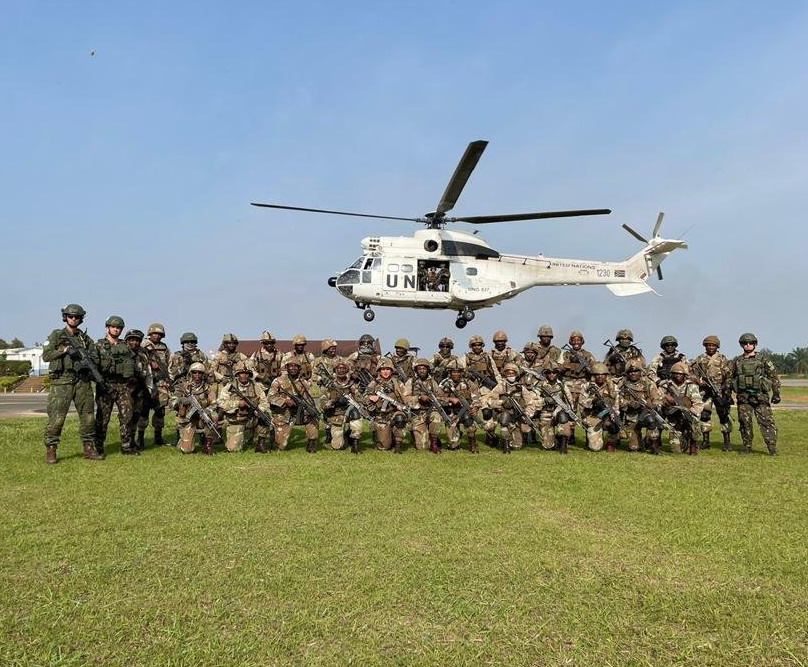 Members of Brazil’s armed forces have assisted the South African National Defence Force (SANDF) with jungle warfare training as part of the South African contribution to the United Nations’ mission in the Democratic Republic of Congo (DRC).

Last week the SANDF’s Captain T Myeko reported that 30 members of the SANDF’s Quick Reaction Force I received their Jaguar badges and certificates on 15 July after successfully completing training conducted by a Jungle Warfare Mobile Training Team from Brazil.

As far back as 2013, South Africa identified the fact that training South African soldiers in jungle warfare was something Brazil could offer. Along with diving, mountaineering and riverine operations these are all military skills that fit into the African theatres of operation where the SANDF is deployed.

The QRF is an additional South African element for MONUSCO, and QRF soldiers join, but not necessarily work with, the RSA Battalion and Tactical Intelligence Regiment unit in-country.

Earlier this year, a second South African QRF contingent from 1 Parachute Battalion was getting ready to deploy to the DRC. The QRFs will provide a speedier response to incidents as part of the FIB offensive mandate.

Meanwhile, over the last couple of months, Mafikeng-based 10 SA Infantry (SAI) Battalion Group has been undergoing jungle warfare training in South Africa ahead of the next RSA Battalion rotation to the MONUSCO Force Intervention Brigade around October/November. Exercises Matha and Phirima took place in Limpopo to get 10 SAI soldiers ready.

21 South African Infantry Battaltion is currently the South African component of the UN’s Force Intervention Brigade, tasked to protect Congolese civilians from attacks and intimidation by the numerous rebel groups active in the central African country.

This article was published by defenceWeb on July 25, 2022.