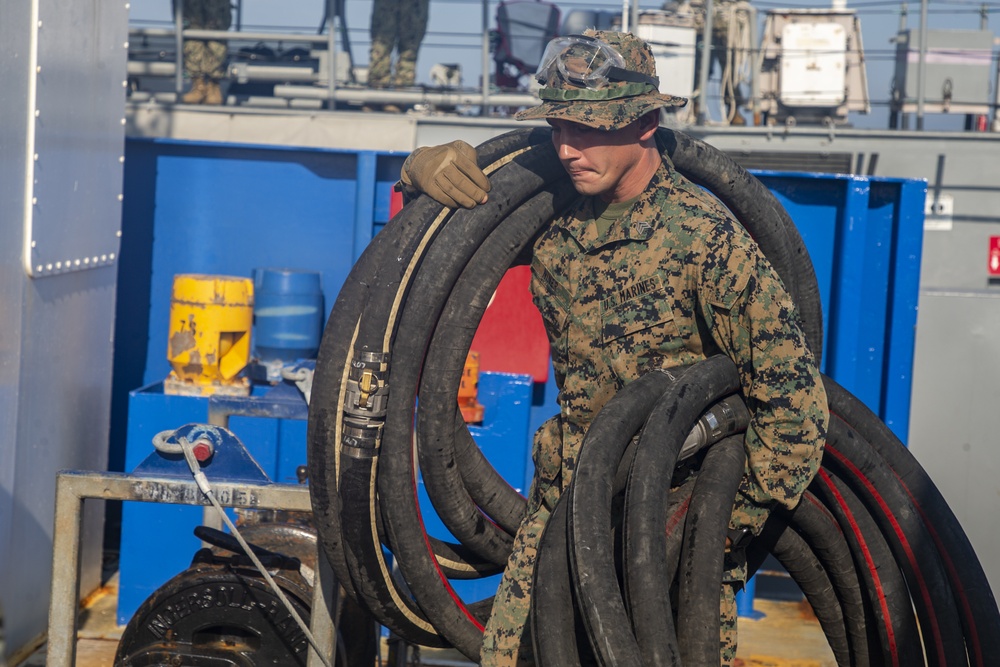 Fueling operations are, by no means, a glamorous occupation in the Marine Corps.

It takes Marines with grit, tenacity, and dedication to work the long, grueling hours needed to provide fuel to warfighters throughout the Fleet Marine Force – especially as the Marine Corps evolves its doctrine and expands its operational scope to support distributed operations through a concept known as expeditionary advanced base operations.

The Marines of Bulk Fuel Company recently fit that bill in historic fashion.

Bulk Fuel Company’s prominent role in the exercise was only a small slice of 2nd Marine Logistics Group’s participation in LSE 2021 but arguably one of the most applicable in evaluating and assessing EABO and distributed maritime operations, particularly while working directly with Navy counterparts.

The Marines of Bulk Fuel Company blazed new trails in an otherwise rigid occupational field that has historically relied heavily on ground transportation to move petroleum products throughout the battlespace. Working with the surface connectors of ACU-2, Bulk Fuel Company Marines transported 7,500 gallons of fuel from ship to shore using only a landing craft utility boat loaded with the unit’s organic fuel bladders.

“This is laying the groundwork and proves this is a tool we can use to facilitate a littoral distribution point for logistics.”Chief Warrant Officer 2 Christopher R. Moser, Operations officer with Bulk Fuel Company, 8th Engineer Support Battalion.

The Marines started the exercise by first embarking aboard the MV Connor Bordelon, an offshore supply ship homeported in Morehead City, North Carolina, to simulate loading Bulk Fuel Company and its equipment onto Naval shipping in an EABO environment.

The rigors of ship-life in an expeditionary environment are very real factors for deployed Marines, and the Connor Bordelon offered a prime training opportunity for Bulk Fuel Company to experience those elements first-hand.

“There are a lot of intangibles [on ship] that Marines don’t get exposed to unless you get them out there,” said Moser. “Letting them experience that planning and execution coming ashore from that vessel versus … driving our stuff out there and pretending we came off of a naval vessel, I think that’s pretty important. That was the other big thing we wanted to accomplish.”

After disembarking from the offshore vessel and conducting familiarization training with ACU-2’s landing craft at Mile Hammock Bay in Camp Lejeune, the Marines were ready to execute the inaugural live fuel transfer from the Connor Bordelon to collapsible fuel bladders set up aboard the landing craft utility boat using only organic Marine Corps fuel equipment.

Previously, the Marine bulk fuel community had trained with the Navy moving its equipment aboard landing craft – but never with live fuel. Another challenge for the Marines was the design of the fuel bladders, which do not typically sit aboard naval shipping.

“The fuel bladders aren’t designed to be employed on amphibious vessels, so that was a challenge. It’s designed to be stationary … if you can imagine a water-bed contending with the sea, you start to get a little nervous because that thing is moving around,” said Moser.

The preparation and planning that went into this historic evolution of LSE 2021 demonstrates the extreme attention to detail that Marines must exhibit while working underway, considering not only weather factors such as sea state but also the intricacies of integrating with another branch of service in an operational setting.

After confirming everything was lined up for execution, Moser recalled how the Marines went to work and immediately battled the dynamics of operating at-sea.

“The heat was a factor, especially on the LCU. Low tide hit, so we had to stay out in the open water and wait for the tide to come back in. Sitting on that LCU out there in the sun, it essentially turns into an oven. That was one thing we had to contend with.”

After what was a scorching day in the thick Carolina humidity, the Marines of Bulk Fuel Company successfully loaded and transported the petroleum product to its destination at Mile Hammock Bay, where it was then moved via tactical convoy to a forward arming and refueling point, resupplying aircraft with 2nd Marine Air Wing operating in support of LSE 2021 training requirements – further simulating the importance of Bulk Fuel Company’s mission in an expeditionary role.

LSE 2021 was defined by the Navy and Marine Corps’ willingness to evolve to the demands of tomorrow’s battlefields, especially as concepts such as EABO are implemented across the fleet.

Bulk Fuel Company exemplified that the Marines and Sailors of the 2nd Marine Logistics Group and II Marine Expeditionary Force, in partnership with the U.S. Navy, will always adapt and overcome in any clime or place, enabling the Marine Corps’ ability to fight tonight.

“The Marines loved it. It was definitely a change of pace for them. I hope this builds trust and rapport between us and the Navy so we can continue to do things like this. It shows the rest of the Marine Corps, ‘Hey, we’re in the game, too.’”

This article was published on August 25,2021 by Marines.mil.

In an interview with the then CO of II MEF, Lt.General Beaudreault highlighted the way ahead for 2nd ESG working with II MEB.

Lt. General Beaudreault underscored that an agreement was being coordinated with 6th and 2nd Fleets whereby 2d MEB would stand up an integrated headquarters, potentially based at Camp Lejeune that would work integrated operations between the fleet and the MEB.

Although details will need to be worked with regard to the standing up of an integrated naval headquarters, the strategic direction was clear.

“Conceptually, this force would be ESG 2 integrating with 2d MEB to form an integrated naval headquarters that supports NAVEUR. When ESG 2 and Second MEB came together and went to a BALTOPS, they went to the Mount Whitney to train and then were disestablished and went back to their respective locations.

“But we are interested in creating a permanent structure which stays together. Whether it’s for exercises, we see it as an opportunity to command rotational forces in the high north. When we send battalions or squadrons or a fighter squadron to Finland, all of those kinds of organizations could be underneath the integrated headquarters.  The goal is to create permanent structure, with full-time personnel.”

And for a recent interview with 2nd Marine Logistics Group, see the following: