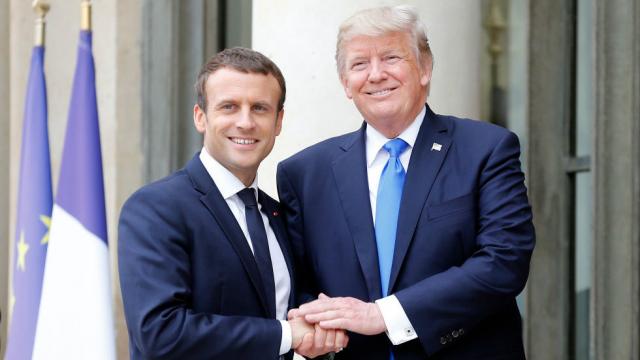 It is a difference in styles, approaches and perhaps temperament,

But President Macron has arrived in the midst of crisis within France and wider one within Europe.

And both have one key political accomplishment – no one expected either one to become President.

If President Trump can be described as a political icebreaker in American politics, certainly one could describe President Macron much the same way.

And in each case, one can pose the question of the their long term impacts within each of their socities.

Both President Macron and Trump promise to generate growth in their own societies and enhance the security of those societies while leading fundamental change globally.

While they seem to be engaging in what Piaget might call parallel play, the impacts of the policies of one on the other are very significant but perhaps not managed in ways that would most effective more generally.

President Macron is taking on his civil servants by in effect trying to make them civil again. Without taking on the privileges of civil service unions and creating more realistic work conditions, unemployment will remain high and the younger generation which voted for him in droves will not gain much traction in shaping viable economic futures and the lives they might wish to live.

But the result is serious disruption.

In this April 3, 2018 story CNN highlights the stance of the rail workers and their actions.

Rail workers across France have gone on strike for the first day of a three-month rolling walkout, the latest and potentially biggest battle over labor laws in the country since President Emmanuel Macron took office last May promising to transform the jobs market.

Train services have been severely disrupted, with around 87% of high-speed trains and 80% of regional services canceled Tuesday, according to SNCF, France’s state-owned rail company.

Eurostar services were also affected, with one in four services from Paris canceled. High-speed Thalys trains towards Belgium and the Netherlands were operating almost as normal, but there were no services towards Switzerland, Spain or Italy.

Disruption of air traffic is also significant and designed to put pressure on the President to end his efforts at reform.

And with those disruptions comes massive traffic jams in the Paris area and enhanced pollution and all for the climate change aware public in France.

These actions might well have more impact on climate change than anything President Trump has actually done.

The social networks, which helped elect President Macron, are fighting back and shaping a civil society negative reaction to the unions and the strikes.

Indeed, there is not much support within France for what are essentially actions designed to hold up the French state and public and block vitally needed economic reform in France.

President Macron has articulated the need for broader European reform and is seeking with Chancellor Merkel to get the European project moving again.

But his own internal difficulties and the coalition government in Berlin may make this very difficult indeed.

Perhaps President Trump might become an ally in dealing with the global problems and challenges for President Macron in spite of whatever stylistic and ideological differences they might have.

After all they are a couple of icebreakers within their own systems, and represent the significant change going on in America and in Europe.

Rather than looking at Macron as the European leader who can talk “Trumpese,” or to look at Macron as the globalist operating as a buffer against the winds of Trump buffeting the West, Macron is clearly trying to leverage Trump for domestic advantage and within the major struggles ahead as Europe reshapes and redefines itself.

And working with Trump is clearly of interest to Macron as he works to augment France’s role within Europe and outside of Europe. The timing of his visit coincided with a crisis involving the alleged use of chemical weapons by the Syrian regime against its own people.  President Trump made it very clear, notably via his unique method of pounding the table, namely tweeting, that he wanted to hold the regime responsible for its actions.

It is very clear that for President Trump, that the question of the proliferation of weapons of mass destruction are seen as a much higher priority than the last two Administration’s focus on stability operations in the wake of the invasion of Iraq.

And chemical weapons use is something which he as already authorized the use of force against in the case of the Syrian regime.

The President of the Republic, has been in a position to influence the US President with regard to options and choices with regard to Syria.  His own advice dovetailed nicely with internal debates within the Trump Administration as well.

Here Macron can be seen working closely with the US President, shaping a nuanced response, and de facto representing European interests.

He then could work with the UK to shape a joint response to the proposed US actions.

The UK is important to President Macron on several levels, including on defense.

And the Brexit negotiations could well threaten cooperation between British and French defense firms, something which clearly neither the British Prime Minister nor the French President would wish to see happen.

Notably, the weapons used by Britain and France in their strike on Syria are built by a company which benefits significantly from joint French and British investments, and the missile used in fact is a joint French-British missile.

As the UK Ministry of Defence noted:

The military facility was a former missile base, located some fifteen miles west of Homs, where the regime is assessed to keep chemical weapon precursors stockpiled in breach of Syria’s obligations under the Chemical Weapons Convention.

Very careful scientific analysis was applied to determine where best to target the Storm Shadows to maximise the destruction of the stockpiled chemicals and to minimise any risks of contamination to the surrounding area.

The facility which was struck is located some distance from any known concentrations of civilian habitation, reducing yet further any such risk.

And the French used Storm Shadows fired by their Rafale fighter jets and another key MBDA strike missile from their frigates.

The new FREMM frigates are armed with MdCN (Missile de Croisière Naval) cruise missiles, which are derivates of Storm Shadow, with 16 launch tubes for them on each ship.

And President Macron has been involved in sorting through the Russian angle in the crisis as well.

He is visiting Moscow next month and repeatedly has been involved in the reassurance process with regard to Russia about the strikes in Syria.

Put in blunt terms, Macron’s performance and timing would warm the heart of the late General de Gaulle.  Work the Americans and reassure the Russians, and all the while representing Europe as the strong force shaping as good an outcome as one might expect in a nasty situation.

As the French government stated after the strike:

The red line set by France in May 2017 has been crossed.

I have thus ordered the French forces to intervene tonight, as part of an international operation with the United States of America and the United Kingdom, directed against the hidden chemical arsenal of the Syrian regime.

Our response has been limited to hitting the capacities of the Syrian regime that permit the production and use of chemical weapons.

We cannot tolerate the trivialization of chemical weapons, which is an immediate danger for the Syrian people and our collective security.

This is the direction of the diplomatic initiatives put forward by France at the United Nations Security Council.

From tweets to policy, Macron steadies the ship, certainly a view which he can leverage back home.

Not a bad outcome from his work with Trump.

Let us see what happens on his current visit.