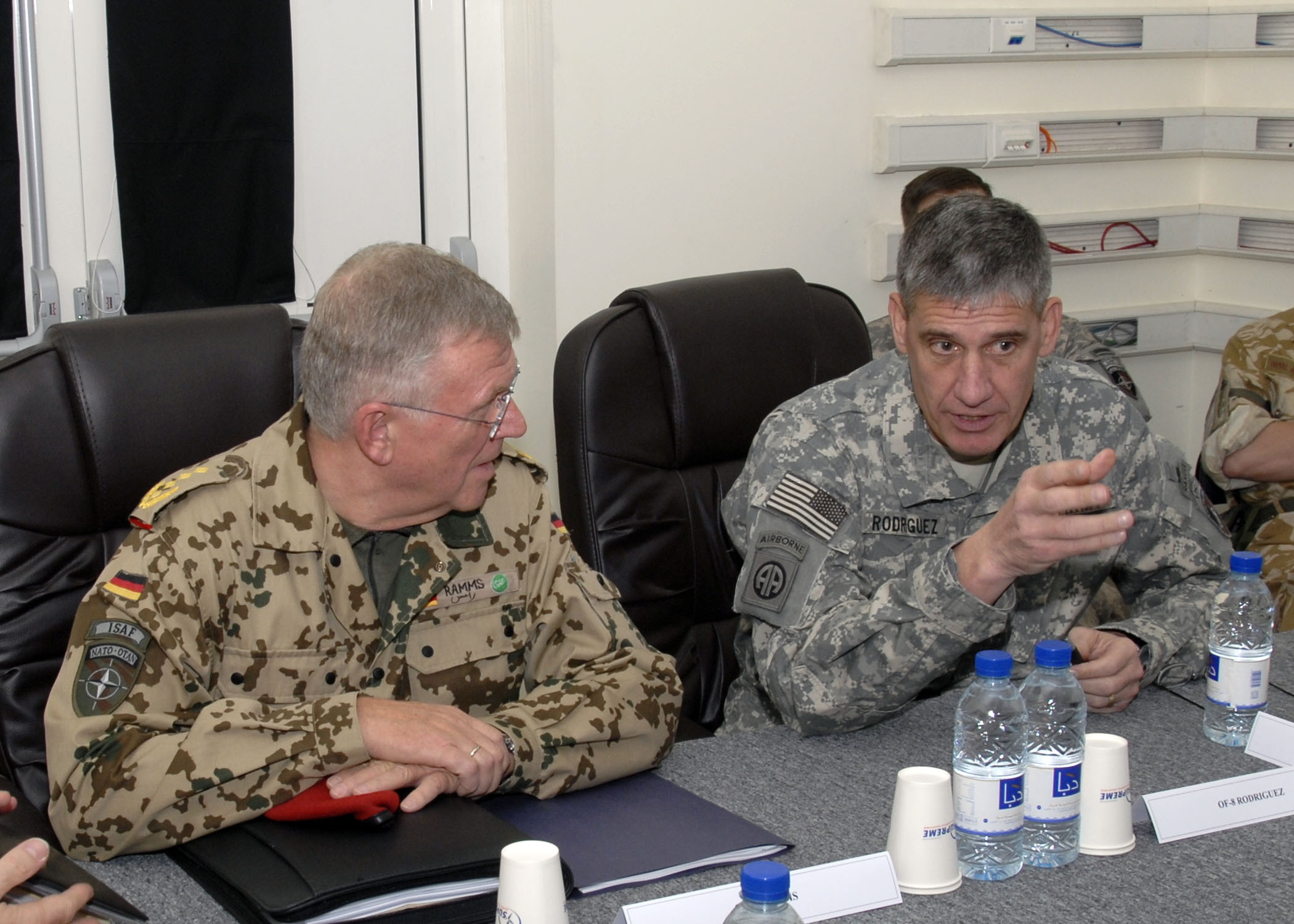 For the last three years, I have traveled extensively in Northern Europe to discuss the Russian challenge and the return of direct defense.

During a visit to Germany in February 2019, I am visiting Germany to discuss with German experts and retired senior German military, their assessments of the challenge to Germany and the way ahead to deal with direct defense of Germany and its contribution to deterrence.

I had the opportunity to talk with one of the most respected retired senior German officers during my visit to Bonn and to get his perspective on the challenges and the way ahead.  General Egon Ramms has had an impressive career, which is detailed in his resume seen at the conclusion of this article.

For the purposes of my research, his time in Poland and working with the Baltics on their defense are especially relevant to thinking through the direct defense challenge and Germany’s potential contribution.

Quite clearly, the German, Baltic and Polish defense spaces are closely interconnected, and Germany’s potential role in reinforcing deterrence crucial to a credible NATO effort to constrain Putin and the authoritarian Russian state.

For General Ramms, the Russian actions in Crimea in 2014 functioned as the 9/11 attacks on the United States did for Europe.

It was clear that Russia was not going to play by the rules based or with regard to respected international law anymore and was taking seriously its claim that Russians in the former Soviet territory needed to be included in the new Russia.

This was already evident in 2008 with Russian actions against Georgia; but those warnings were largely ignored; but the Crimean (invasion) occupationcould not be ignored. It was an in your face intervention which violated accepted international norms.

Question: Based on your experience, how do you view the challenge of common defense for the Balts, Poland and Germany?

General Ramms: I have had the advantage that I was garrisoned in Poland, and responsible as the Commander of Multinational Corps in Stettin in Poland between 2004 and the end of 2006.

“Something I realized when I came to Poland was that the Polish people and officials had a completely different feeling, and a different behavior towards Russia than we Western Europeans have had.

“There is real concern about Russian incursions against Poland.

“I then had the chance, a few years later in 2008, directly after the Georgian War to have a duty visit as the commander of Allied Joint Force Command Brunssum (NLD) to go to the Baltic States. That was six weeks after the Georgian War, and what the Baltic states expressed was their real concern about their safety, security and defense with what they saw as clearly a Russian aggressive role.

“They clearly feared that what has happened to Georgia could happen to them. The question then become how do we establish a defense plan for the Baltics?”

Question: With the return of direct defense clearly seen in the Baltic and Polish cases, what needs to be the German response?

General Ramms: The initial step has been to develop consensus with regard to the new situation. The Defense White Paper issued in 2016 is a whole of government document as opposed to the previous ones which were simply MOD White Papers on defense.

“Based on this commitment, we have begun to revise policy and for example, Germany deployed additional aircraft to the Baltic Air Policing mission and began to shape a battalion for deployment to the Baltics.

“Obviously, this is not enough and one can look at the paper which I coauthored with regard to Baltic defense to get a sense of what I think is required for credible defense of the Baltics.

Question: That raises the question of what capabilities in your view does Germany need to provide a credible defense capability after the years of hollowing out the Bundeswehr?

General Ramms: What do we need?

“We have to have forces which are able to conduct enduring defense operations. From 2011, the German government focused completely on global deployments, stabilization operations and providing a contribution along those lines.

“That meant giving up the kind of capability we had in the 1970s and 1980s for common defense, home defense, enduring defense operations and Host Nation Support.

“It is clear that such an approach has led to a military much less capable of providing for the kind of direct defense requirements we now face. As a follow up to the 2016 White Paper, conceptual papers have been written by the Bundeswehr with regard to the capability profile which is necessary for a build out of forces and which can provide for enduring defense.

“By that I mean  a force that can defend, attack and conduct delaying operations and – most important – is available in a timely manner.

“The force capabilities necessary have been identified; but they need not only be funded but fielded much more rapidly than a slow rollout process would allow.

“When we talk about direct defense, we are not simply talking about power projection; we are talking about defense in depth, territorial and home defense as well as about Combat Service Support and Host Nation Support.

“Because Germany would function as the rear in terms of force generation,C2, deployment and logisticsfor any defense operation for the Baltics or Poland, we need to be able to provide a credible and stable territorial defense of Germany as well.

“We need credible logistics and supply systems which can provide both timely and enduring support to German and allied forces.

“The capability profile to be achieved until 2031 which I mentioned foresees the creation of three mechanized divisions which will be deployable in a much shorter time that we can do with today’s Bundeswehr.

“But we have to introduce in some areas even more equipment than the plan projects for we will need to increase the number of artillery battalions, the number of engineering battalions, Army air defense units and acquire all those tools, equipment and supplies which provide for a sustainable force which can credibly defend Germany and support operations in the Baltics and Poland.

“And with regard to education, training and equipment, we have to regain the capacity to conduct combined arms operations and today under Hybrid Threat conditions.”

For a look at the study co-authored by General Ramms concerning Baltic defense, see the following:

General Ramms was born in Datteln, Westphalia on 21st September 1948. He joined the Bundeswehr on 1st October 1968 as an officer candidate and temporary career volunteer for three years, serving in the Unna-based Maintenance Battalion 470. From 1968 to 1971, General Ramms undertook his initial officer education and training at Aachen and Hannover. In 1971, he began academic studies in Darmstadt, from where he graduated as a Master of Mechanical Engineering (Diplomingenieur) in 1975.

From 1975 to 1978, General Ramms was appointed Commander of Maintenance Company 70 in Stade. From there he continued his military service as the G4 maintenance officer, Headquarters 3rd Armored Division in Buxtehude until 1980. Returning to the academic environment General Ramms attended the General Staff Course at the German Command and Staff Academy in Hamburg for the following two years.

From 1982 to 1984, General Ramms served in G3 Operations, 6th Armored Infantry Division in Neumünster. This was immediately followed by two years as Chief of Staff and G3 in Germany’s Home Defense Brigade 51 in Eutin. From 1986 to 1988, he was Assistant Branch Head of the Arms Control and Disarmament Branch in the Federal Ministry of Defense, Armed Forces Staff III 5. General Ramms’ next appointment, again for a period of two years, was Commanding Officer of Maintenance Battalion 120 in Rheine.

From there, in 1996, General Ramms took command of Logistics Brigade 1 in Lingen/Ems, for a period of two and a half years. 1998 saw General Ramms assume the position Division Head Armed Forces Staff V, Logistics, Infrastructure and Environmental Protection in the German Armed Forces. This was followed by his appointment as Director of Armed Forces Staff, Ministry of Defense, commencing September 2000 from where he was assigned as Commander to the Multinational Corps Northeast Stettin in Poland in February 2004.

In his time as Commanding General, the Multinational Corps Northeast was certified as Combat ready HQ of lower readiness, got the Baltic States, Tchech Republic and Slovakia as new members into the Headquarters. General Ramms took up his post as Commander Allied Joint Force Command Brunssum on 26th January 2007. His main effort was the ISAF – Mission as its operational Commander. Dan McNeill, David McKiernan, Stan McChrystal and David Petraeus served as COMISAFs under his command. NAC authorized Prudent Military Planning for the Defense of Poland and the Baltic States was another – from today’s perspective – very important part of his mission within his regional responsibility. He finished his duty in the Federal Armed Forces on 30th September 2010.