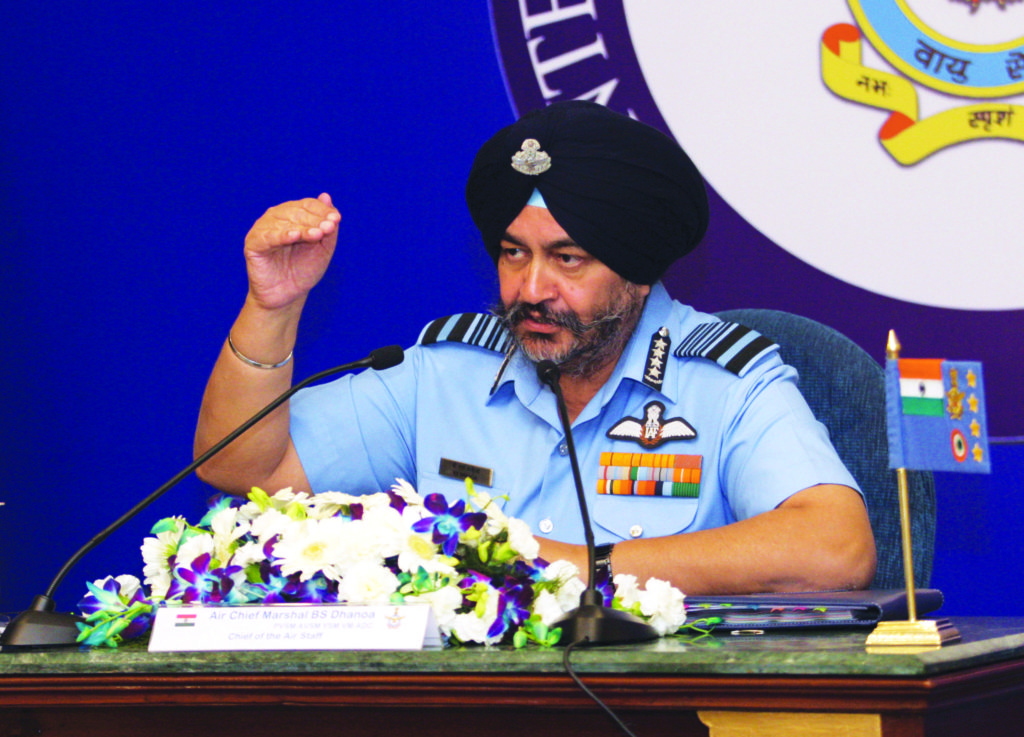 The IAF has a capability driven modernisation plan in consonance with the roadmap laid down in our long term plans to meet full spectrum capabilities”, stated Air Chief Dhanoa during an interview with India Strategic. Major excerpts of the interview are given below:-

India Strategic. Sir, the India Strategic Team congratulates you personally, and the IAF Officers and Personnel, for 24 x 7 preparedness to meet any situation. Nonetheless, there have been, and are, challenges for IAF both in terms of numbers and newer technologies for combat operations. Capability build-up is fundamental to deterrence, and if a war is imposed, then for victory. Your observations please on both these aspects, that is, on Capability and Numbers.

BS Dhanoa. The shortfall in fighter aircraft strength as against authorised strength is planned to be made good through induction of remaining contracted Su-30 MKI, LCA and Rafale.

Procurement for 83 LCA Mk1As has been initiated. Further, a case for 114 fighter aircraft is being processed under the Strategic Partnership model of DPP-16. Other options are also being explored to build up to authorised strength at the earliest.

India Strategic. IAF has already gone through the technical appraisal of the six aircraft in the 2007 MMRCA competition. The same aircraft are back in the fray now in the current competition, and some of them would necessarily have newer technologies on board, given the fact that war technology, like any other, leapfrogs. What will be the required procedural steps, like RFP, Technical Evaluation, Financial Calculations, Final Selection and the Contract? As the acquisition process is far behind, can the IAF compress the process?

BS Dhanoa. The case of 114 fighters is through the Strategic Partnership route and the process as laid down in chapter VII of DPP-16 will be followed.

India Strategic. Whatever aircraft IAF buys will have to be operational for the next 30 to 40 years. What are the futuristic technologies you think will be needed in contemporary terms, like Stealth, AESA, Speed, Range, Weapons, EW Systems, and importantly, during Upgrades every ten years or so? These systems and capabilities will perhaps be defining in your selection process. And will the selected OEM be required to share them for the indigenous production of the aircraft, as also towards the development of AMCA or any other system?

BS Dhanoa. The IAF has a capability driven modernisation plan in consonance with the roadmap laid down in our long term plans to meet full spectrum capabilities.

This is being achieved by the induction of the new platforms and systems along with the continuous upgradation of the existing equipment. All Capital procurements are progressed as per the DPP which gives the highest preference to indigenous equipment.

It is the IAF’s endeavour to achieve self-sufficiency through a focused, sustained and evolved indigenisation programmes by supporting the ‘Make in India’ initiative.

India Strategic. Your predecessor had stated during his last press interaction that IAF needs 400 combat jets, a mix of single and twin engine, but both with MMRCA capabilities. Of course, after the initial contract for the 110 aircraft, the number of more aircraft would be placed with the Indian entity selected to make them. Is there a chance for both the Single and Twin Engine aircraft to be inducted, given that the new DPP 2018 is just around the corner? What will be your preference?

BS Dhanoa. The current RFI does not restrict the induction of fighter aircraft based on single or twin engine.

The selection of aircraft would be purely based on the laid down requirements.

The preference would be to select the most capable aircraft that meets the IAF requirements and achievement of desired technology to build an eco-system for boosting the indigenous Design and Development capability of Indian Aviation industries.

India Strategic. Your comments on Upgrades of Jaguar, LCA Capabilities and Timelines, Midair Refuellers and Transport aircraft, C-295’s induction included as well as security of airbases.

BS Dhanoa. The IAF is in the process of upgrading Jaguar DARIN III aircraft at HAL and is likely to be completed by 2023-24.

In the FOC, significant achievement has been made and we expect FOC by December 2018. We have also initiated the procurement of 83 LCA Mk 1A and extending all the support for the development of LCA Mk 2.

The RFI for six FRA has been issued in March this year and SoC formulation is under progress. Thereafter, the case will be progressed as per DPP.

The Avro Replacement case is underway and presently negotiations are in progress and the case for avionics upgrade of IL-76/78 and Re-engining of IL-78 is at negotiations stage.