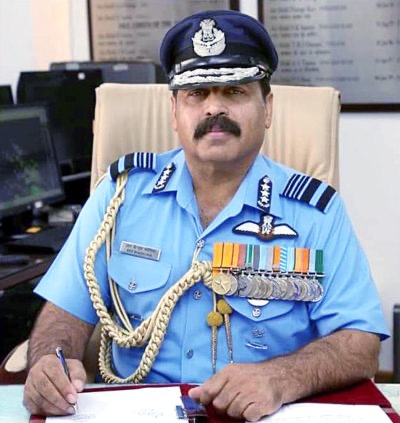 New Delhi. The Indian Air Force (IAF) is focusing on building its numbers, acquisition of newer technologies, and encouraging “rapid establishment of a comprehensive aerospace industry” in India.

Stating this, Chief of Air Staff, Air Chief Marshal RKS Bhadauria, told India Strategic in an interview that the first Squadron of 18 Rafales would be operational at the Ambala airbase mid-2021, while the second Squadron of another 18 aircraft should be operational in 2022. Describing the Rafale as a game changer, he said IAF had operationalised the aircraft “in compressed timeframes, and ensured its integration into our current concept of operations”.

He observed: “The Rafale fighting alongside our other platforms and within our networked battle space is truly a game changer. The Rafale is a modern omnirole fighter which effectively fuses its onboard Sensors, Electronic Warfare and Avionics suites to enable a high probability of mission accomplishment in a highly contested environment. The aircraft package also includes a lethal high precision arsenal of Air-to-Air and Air-to-Ground weapons capable of launch at Standoff ranges.”

Asked about more Rafales, he said: “We are currently focusing on signing the contract for 83 LCA MK1A, and the procurement procedure for 114 MRFA under Make in India is in progress. Further plans include the possible follow-on of LCA orders and of course our unequivocal support for the fifth generation AMCA.”

India’s DRDO, aeronautical bodies, the scientific community and academia are now working on developing this aircraft with indigenous effort as well as technologies from foreign aircraft and engine makers.

IAF got five omnirole Rafales in July, and another seven or so should be in India by the end of the year, given the pace of their construction by the French Dassault Aviation. Three are due in November.

When I pointed out that three of his predecessors had said that IAF needed a combination of about 400 single and twin engine combat jets, the Air Chief observed: “The key to increase in numbers lies in successful and rapid establishment of a comprehensive aerospace industry. Involvement of (state-run) DPSUs, private sector and MSMEs effectively by putting in place modern R&D and production facilities would be essential to ramp up deliveries.

“The next seven to eight year period will see the induction of all 36 Rafales contracted for, the remaining 24 LCA MK1 (out of the 40 contracted), 83 LCA MK1A and 33 Russian fighters (12 Su-30 MKI and 21 MiG 29) for which AoN (Acceptance of Necessity) has been granted. The RFI responses to the 114 MRFA includes both single and twin engine aircraft, which will be scrutinized and acquisition initiated based on several parameters. We are planning to induct the fifth generation AMCA squadrons around 2032 onwards.”

A focused whole of the industry approach is essential to ensure timely D&D (Design and Development) and faster production rates, he said.

Asked about rumours in the industry that the process for the 114 MRFAs is likely to be scrapped, he said: “The case for procurement of 114 MRFA is being progressed under Make in India.”

This is a significant clarification coming from the top, setting at rest any doubts.

Doubts actually arise due to the slow progression of procedural clearance in many acquisition cases at the Ministry of Defence (MoD) and unfounded rumours spread by either vested interests or out of ignorance. Once a controversy arises, there has to be an unneeded, time consuming inquiry.

Asked about Unmanned Aircraft Systems like the General Atomics Predators, Air Chief Marshal Bhadauria said that they are on IAF’s priority list.

“Unarmed systems like Sky Guardians are capable of operating in high altitude terrain and will be a significant addition to our ISR assets. They will play a vital role in enhancing intelligence gathering capability. The case is being progressed and these systems are a priority area in the near future.”

Notably, each of the three Services, Army, Navy and Air Force has put forward a requirement of 10 Sky Guardians or Sea Guardians, and initially the Government has reportedly approved acquisition of two each for each of them. That is, a total of six Remotely Piloted Aircraft (RPAs), which would have interoperability, and control from ground or ship-based stations. Once the process gets going, the remaining number of eight of these for each Service could be followed up.

The Air Chief stated that astronauts selected by IAF for India’s manned space programme – he described them as Gagannauts – were under training after their selection in a rigorous selection process. “They are ably supported by aerospace medicine specialists from the IAF Institute of Aerospace Medicine.”

He pointed to the significance of Space Security, saying “the Defence Space Agency (DSA) has been formed headed by a Director General (DG) – an Air Marshal – from IAF with an aim to address issues of space security.”

“As part of the DSA, the envisaged role will be towards planning, projection and implementation of military space capabilities for the future.” He did not elaborate.

Air Chief Marshal Bhadauria said action is on in this regard, and IAF is working for both the AWACS (Advanced Warning and Control Aircraft) as well as AEW&C (Advance Early Warning and Control Aircraft) and FRAs (Flight Refueller Aircraft). IAF is progressing a case for an additional number of AWACS to plug the “immediate gap” and after that “it is expected that the indigenous AEW&C aircraft project will fructify” and they will also be operational.

Force Multipliers are an integral component of air power and their onboard electronics can effectively detect and neutralise hostile targets either by jamming and electronic interference or by guiding combat aircraft and pinpoint targets for them for delivery of weapons. IAF’s Israel-sourced Phalcon AWACS, mounted on Russian IL 76 aircraft, can look deep up to 400 km, and support any mission against hostile forces. The radar imagery and communications provided by them can change a battle scenario and provide that proverbial winning edge.

Their adequate requirement in numbers, and of course capability, was understandably one of my Questions.

The Air Chief observed: “Both these Force Multipliers can change the way we plan and fight aerial battles. AWACS with its command and control capability coupled with SIGINT (Signals Intelligence) features brings battle transparency deep inside enemy territory. Mid Air refuellers further increase the reach of our fighters and allows desired tactical routing.”

And that the process is on to plug the immediate gap. “While we have highly capable aircraft of both these mission enablers, we need to acquire more numbers.”

Air Chief Marshal Bhadauria said the indigenous Transport Aircraft project on track and “taking shape with the procurement of 56 aircraft to replace the ageing Avro fleet.”

The production of 40 of these aircraft in India by the TATA Consortium will give impetus to the development of a whole new manufacturing ecosystem in the country. The project may also find potential buyers from civil aviation and an export possibility as it progresses.

Notably, the Tata Group is manufacturing the aircraft in collaboration with Airbus.

Pointing out that IAF is putting significant emphasis on indigenous production of various systems, Air Chief Marshal Bhadauria said that “IAF is also progressing the induction of the HAL Light Combat Helicopter (LCH).

“When equipped with a suitable sensor and weapon suite, the LCH has a promising potential for the future.”

It may be noted that some European aid US companies have offered to provide critical components and weapons for the LCH. Among them is Raytheon’s offer to equip the aircraft with its Air-to-Ground Stinger missile.

This article was published by India Strategic on November 1, 2020.