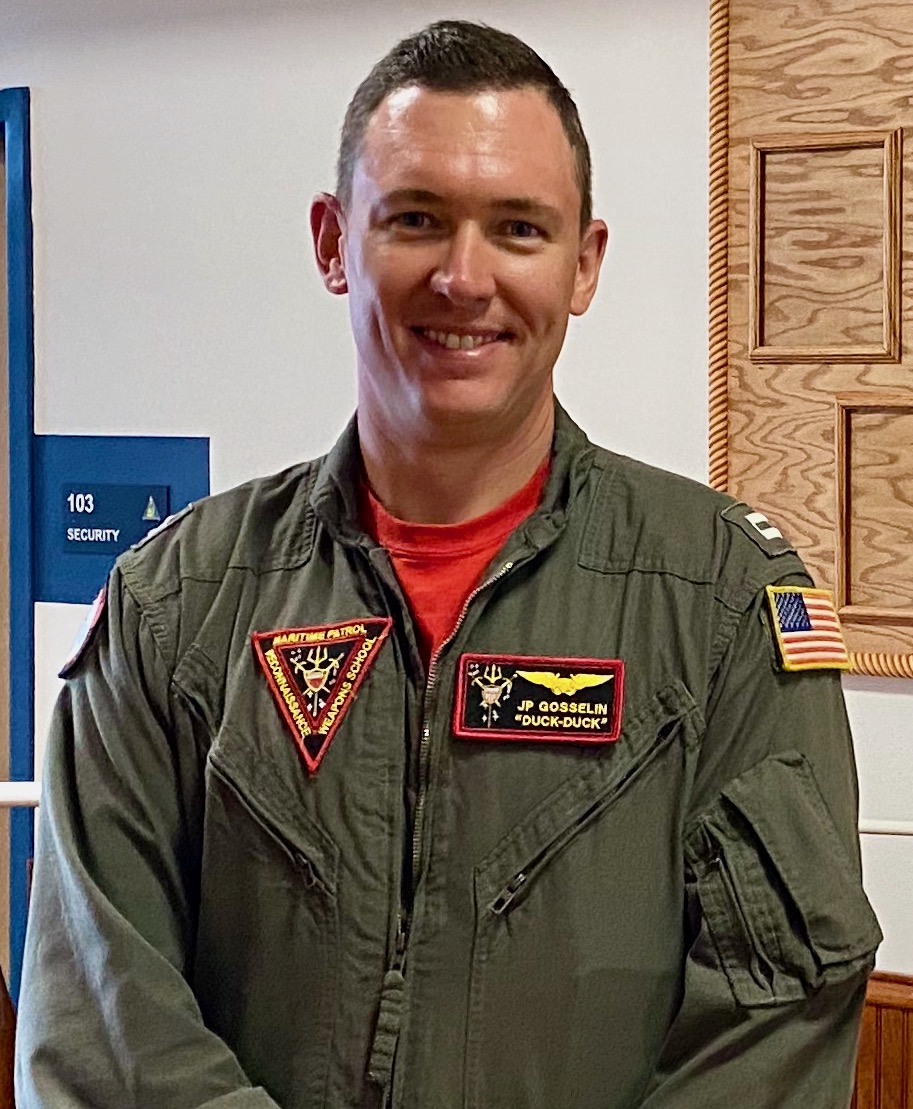 Kill webs rely on networks, wave forms, connectivity, distributed C2 and platforms which can leverage all of the former.

Platforms are the time-space entities which enable the force; integrability allows a distributed force to deliver the desired combat effect.

At Jax Navy, the P-8 operators are trained to be P-8 operators at VP-30 to be proficient at working the platform. At VP-30 takes the operators fresh out of flight school and introduces them to the P-8 as a platform and gets them safe to fly and operate in the aircraft.

Now I am a competent “newbie” on the aircraft, beyond gaining actual operational experience, how do I train for the higher end warfighting capabilities which the aircraft can achieve when operating within interactive kill webs?

My guide to thinking through the answer to this question was my guide for my time in Jacksonville and Mayport, Lt. Jonathan Gosselin.

He has a rather unique path to where he is currently within the Navy. “Duck Duck” is his call sign which probably comes from not wanting to have him referred to as the great baseball player “Goose” Goslin. He was enlisted navy before being recruited for the Seaman to Admiral Program. He went to The Citadel and then became a commissioned officer. He was an early P-8 officer, entering VP-45 as it became the third squadron to deploy with the P-8 in 2015. He has certainly experienced the “training wheels” phase of deployment and is now a P-8 Weapons and Tactics Instructor at the Maritime Patrol Reconnaissance Weapons School.

When he first deployed, the P-8 was an anomaly.

Now it is deployed to all of the COCOMS worldwide.

In his current position, he serves an innovation, cross-functional team lead where he works with innovation experts, defense industry and the Navy to shape projects which are then generated for implementation by industry. He works as well on process changes where advances in TTPs can be enabled as well.

We discussed at some length the training processes from baseline operator to weapons expert and I will outline that in a later article.

But in this article I want to highlight how the process of thinking through a kill web enabled P-8 is being shaped and trained.

For Lt. Gosselin, at the heart of the effort is really understanding, training for and executing third party targeting.

He argued that moving from a stove-piped mentality where I am both the sensor and the shooter, to a kill web perspective where the P-8 could provide the sensors for a firing solution, or whether the P-8 would deliver a weapon provided by another asset to perform the firing solution is at the heart of the change.

According to Lt. Gosselin: “What I am working on right now is shaping a curriculum to bring that capability to the MPRA community.”

He added: “We are working to develop con ops and integrate with other platforms such as the B-1, the B-52 and eventually with the B-21.

“This is where we’re trying to go with the force.

“We’ve realized that we’ve put ourselves in a stovepipe, and we have to break ourselves out of that stovepipe and understand that we are not going to win this fight alone.

“It does not matter who the adversary is.

“This is a joint fight.”

In effect, what we are discussing is dynamic targeting across a distributed integrated force.

As Lt. Gosselin put it: “We’re talking about taking targeting data from one domain and quickly shifting to another, just like that. I have killed target under sea.

“I am now going to go ahead and work the surface target and being able to understand the weapon sensor pairing network, and being able to call in fires from different entities using commander’s intent to engage the target.

“That’s what we’re trying to do.

“Get our operators to understand that it is not just a one-piece answer.

“here may be a time when you have to kick to another shooter.”

To do so, he is engaging significantly with the Triton squadron as well to shape a way ahead for kill web dynamic targeting.

Lt. Gosselin noted: “With the P-8 and Triton we are able to expand our envelope of situational awareness.

“We can take that and now take the baseline concepts from what the P-3 did and apply them to a more advanced tactics, techniques, and procedures in the form of integrating with the B-21, the B-1, the F-18’s, the F-35 joint strike fighter in a dynamic targeting kill web.”

And with regard to the cultural shift, this is what he added:

“Let’s break ourselves out of this stovepipe and understand that I may not always be the best shooter.

He focused on the key role which the weapons school is and will play within the US Navy to shape this cultural shift.

I will focus on the discussion about the shift in training to achieve this dynamic targeting function in a later article.

His call sign may be “Duck Duck,” but it seems more appropriate to think of the MPA community is operating like the Ospreys flying outside of windows here in North Carolina – if you are a fish, you certainly do not want to see an Osprey overhead.

But for the adversaries who operate below and above the sea, the evolving MPR community is not just watching those adversaries is working ways to kill you with weapons that they are not even carrying.