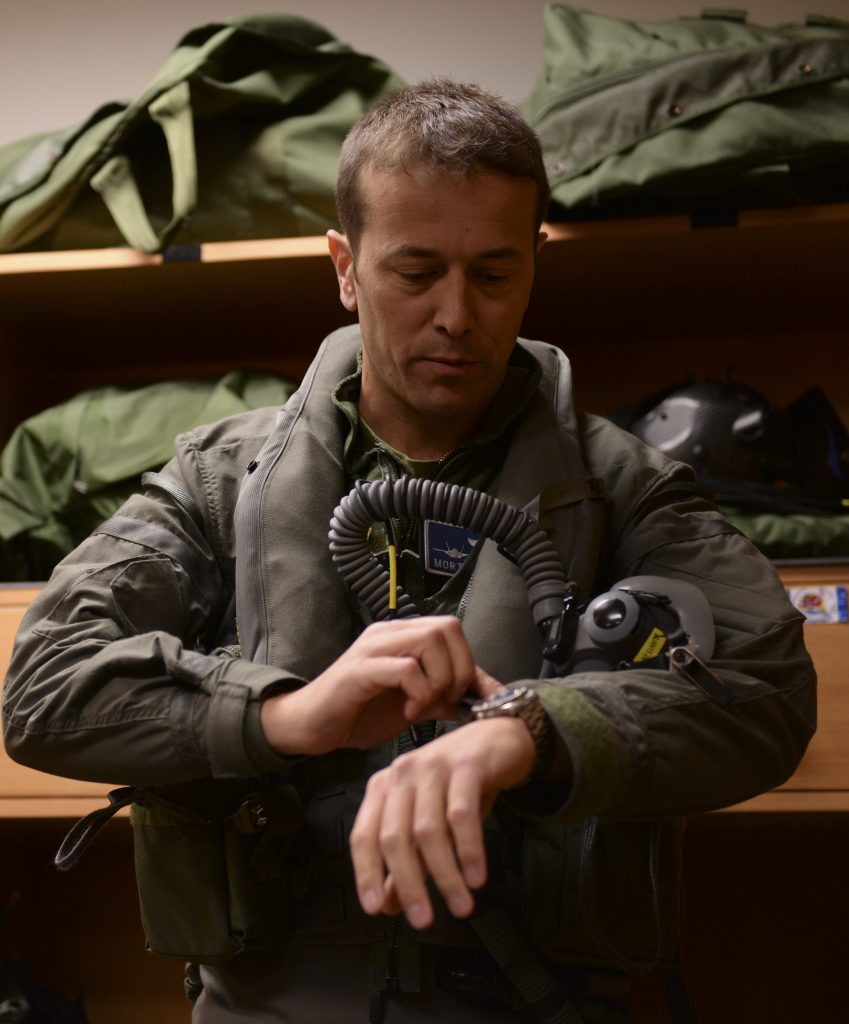 Those interviews highlighted the building out of infrastructure and the general transition to becoming an all-fifth generation air combat force.

The specifics of working the air system and shaping a way ahead for the Norwegian Armed Forces in forging a 21stcentury combat force was discussed with the first Norwegian pilot of the F-35, Major Morten Hanche.

Earlier, we published his look at the coming of the F-35 to Norway as well as his presentation to last year’s Norwegian Airpower conference.

During this visit, we discussed the coming of the jet and working a way ahead for the combat force in the defense of Norway.

As the plus up the aircraft at Ørland and prepare for IOC, they have the opportunity to fly and work with the navy as they operate over Norwegian sea and land space.

With the deployment of the NASAM ground based system, they can work with the Army and with the coming of the Joint Strike Missile there is an opportunity to share a joint sensor-shooter working relationship.

Major Morten Hanche: “We are working from the outset on working together and creating multiple sensors and multiple shooters as we leverage the F-35 in Norway.

“For instance, we’ve been out practicing with Norwegian frigates and corvettes and providing target data for the NSM (Naval Strike Missile), which is the younger brother of JSM (Joint Strike Missile).

The Major added: “It is not as complex to do this as some think.  We can leverage the aircraft as flying sensor system to work various ways to enable shooters.

“We can practice and work this with our joint force partners as we fly the F-35 in the course of preparing IOC as well.

“And the flexibility which we can achieve leveraging the F-35 will be significant as part of shaping a way ahead.

“It could be a sensor for an external system or could be the shooter.

“Or maybe neither; it might simply provide the jamming capability to enhance the survivability of the missiles we are using to engage the adversary.”

The interesting thing about the stand up of the F-35 in Norway is clearly it is happening in a strategic location.

And because the Norwegians are focusing a significant part of their indigenous defense industrial capabilities on the missile side of the house, they are standing up the F-35 as they evolve the missile capabilities for the joint force.

And these capabilities can provide reach out with other allies, such as Australia and Japan who are clearly interested in the Joint Strike Missile.

The joint strike missile will be able to be fired from the air, ground or sea.

And because they are acquiring a combat aircraft, which can operate in a very flexible sensor-shooter, working relationship with the air, ground and sea force, singnicant joint force innovation can be unlocked as well.

Unlocking this kind of joint force integration is what I am calling F-35 2.0, or how to leverage the aircraft as part of a broader force transformation effort and design process.

F-35 1.0 is getting the plane and operating it in squadrons; F-35 2.0 is leveraging the aircraft as part of an overall transformation process.

And such an approach will be accelerated if the aperture of the acquisition side of the house is opened, in order to tap into significant innovations as well with regard to the development of strike systems as well.

This is a work in progress, but one inherent in leveraging the F-35 and the F-35 as a global enterprise.

For example, the USMC is a regular visitor to Norway and will operate F-35Bs from the sea base or perhaps operate ashore within the Norwegian basing structure in a crisis. The UK carrier will provide a mobile base from which to support operations in defense of Northern Europe as well.

It is clear that sharing of data across a deployed allied with the Norwegian F-35 forces can provide significant reach to support a diverse strike enterprise to provide for extended deterrence of the Nordic region as well.

Working through security arrangements to share data across the UK, US and Norwegian F-35 enterprise, as well as Denmark and the Netherlands, can provide a very significant foundation to provide for extended reach for an offensive-defensive enterprise in the defense of NATO’s Northern region.

And it all starts with standing up the F-35 at Ørland Airbase and learning from the outset how to operate the aircraft as an enabler of a 21stcentury approach to deterrence in depth.