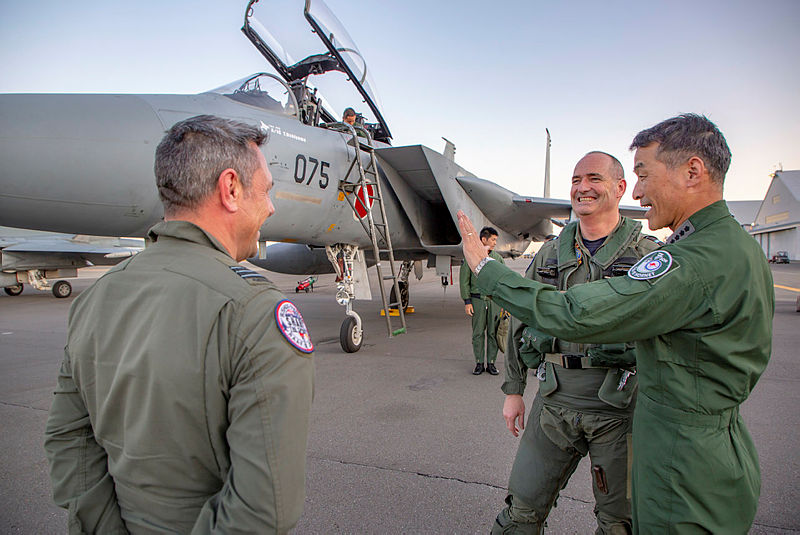 Two recent articles published on the Australian Ministry of Defence website focused a recent Japanese-Australian Air Force exercise. The exercise is part of the expanded working relationship in defense agreed upon in 2017.

And during the exercise, Air Marshal Hupfeld underscored the working relationship with the Japanese.

The Chief of Air Force, Air Marshal  Mel Hupfeld, has greeted participants of Exercise Bushido Guardian 2019 with a confident “konnichiwa” during a hangar ceremony in Chitose, Japan.

The exercise, involving members of the Japan Air Self-Defense Force (or Kōkū Jieita) and the Royal Australian Air Force, is being conducted at Chitose Air Base in Hokkaido and Misawa Air Base in Honshu from September 11 to October 8.

During the ceremony, Air Marshal Hupfeld said it was a pleasure to witness the strength of friendship between Australia and Japan and the growing bonds between the two air forces.

“We are here today because of a mutual desire to pursue broader and deeper defence ties, with BG19 achieving that and more,” Air Marshal Hupfeld said.

“Together, we are not only conducting our first bilateral air combat exercise, we also taking a significant step forward in our military relationship and our airmen and airwomen are forging strong personal bonds.”

Air Marshal Hupfeld was confident the new friendships would continue throughout their careers.

“I have no doubt you’ll earn each other’s respect and admiration for your professionalism and skill,” he said.

“Working alongside other air forces allows each of us to gain critical insights and understanding, and unlocks more effective interoperability between friends and allies.

“The realistic and challenging training scenarios will greatly enhance our individual and joint preparedness for operations in support of our national and regional interests.”

Air Marshal Hupfeld thanked everyone for their dedication and hard work and said he looked forward to joining them in the air for an exchange flight in a Kōkū Jieita F-15J.

The Australian and Japanese governments agreed to pursue deeper and broader defence exercise cooperation in 2017.

Postponed due to the Hokkaido earthquake in last September, BG19 is a first-of-its-kind bilateral fighter deployment to Japan.

The RAAF has deployed 140 people, along with six F/A-18A/B Hornets and an air battle management team, supported by the Air Mobility Group and the Combat Support Group elements and linguists.

Japan will have two F-15J squadrons and one F-2A squadron participating in the exercise.

The strength of Japan and Australia’s defence cooperation was evident when the Chief of Air Force, Air Marshal Mel Hupfeld, took to the air in a Japanese F-15J during Exercise Bushido Guardian.

During the ceremony, Air Marshal Hupfeld thanked exercise participants for their contribution to the significant step forward in the two nations’ military relationship.

“Working alongside other air forces allows each of us to gain critical insights and understanding and unlocks more effective interoperability between friends and partners,” Air Marshal Hupfeld said.

“Over the coming days we are not only conducting the first bilateral air combat exercise, we are also demonstrating our shared commitment to an enduring partnership.

“I have no doubt that you are already earning each other’s respect and admiration for your professionalism and skill, and that you will continue to build new friendships that will last throughout your careers.”

“We will continue to pursue opportunities to improve bilateral and multilateral air training and exercises, including in new domains,” General Marumo said.

“Australia and Japan are committed to working proactively together to promote and maintain a free, open, stable and prosperous and open Indo-Pacific.

“We will also continue to pursue engagement opportunities that contribute to our two countries’ commitment to our region.”

In a gesture of friendship, Air Marshal Hupfeld and General Marumo took part in exchange flights in both a Koku-Jieitai F-15J and RAAF F/A-18 fighter jet. The jets were piloted by the exercise squadron commanders and gave the chiefs a first-hand insight into the aircraft’s interoperability in the air.

Bushido Guardian, running until October 8, is an important exercise with Australia’s Japanese partners. It provides realistic and challenging training opportunities to guarantee the best quality of air combat support to the militaries during real-world operations.