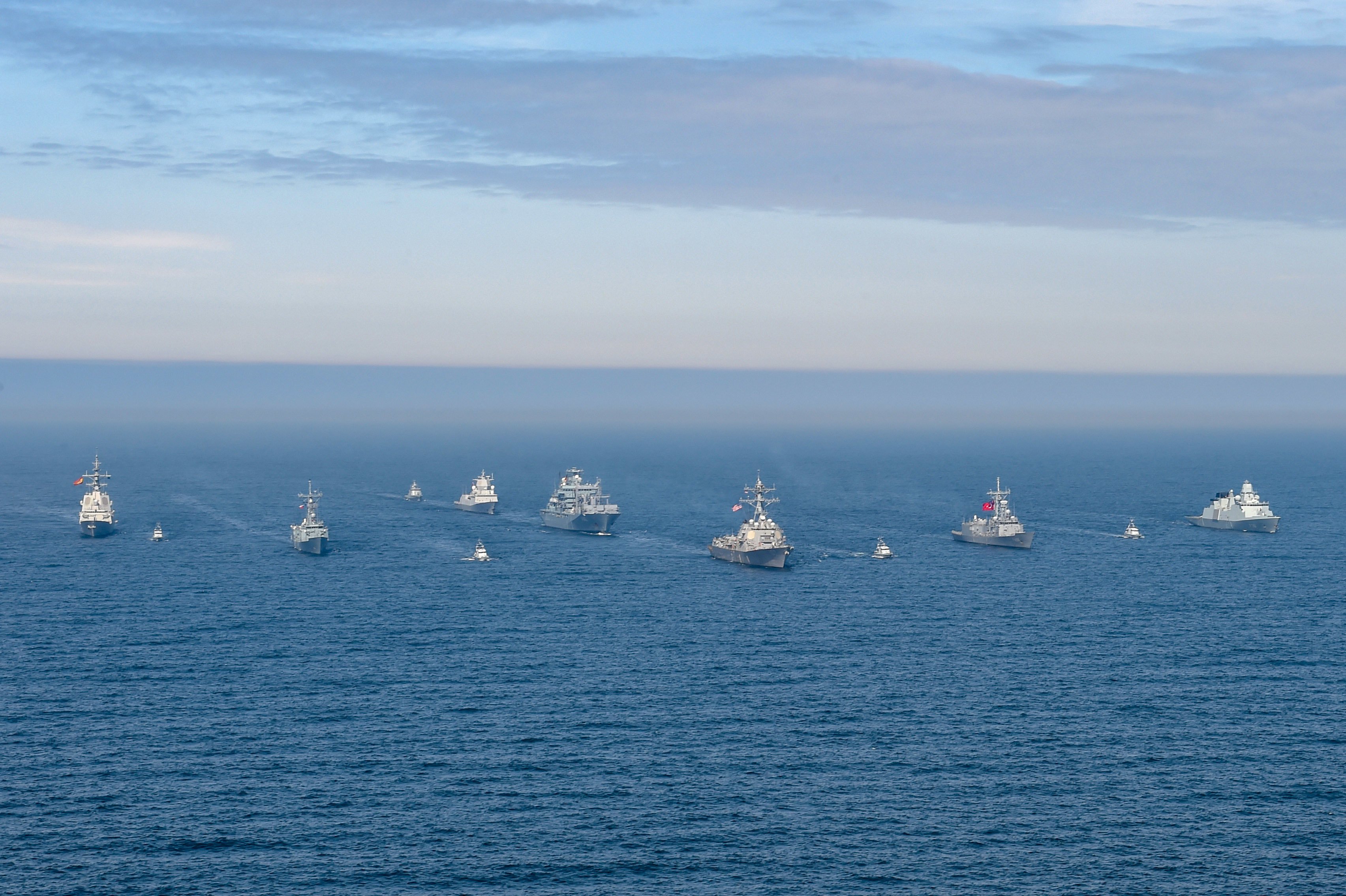 In this outstanding interview by Megan Eckstein of Rear Admiral Edward Cashman, the core contribution of NATO is highlighted — the militaries of NATO working common procedures, approaches and standards.

This is an historical achievement that is an essential element for deterrence in Europe and should be underscored, highlighted, and reinforced by the political class much more often and fundamentally.

Whatever the political differences or different levels of financial contribution, NATO provides a framework for significant military to military integration, a process that carries through the periods of upheaval in the politics of the liberal democracies.

Her interview was conducted aboard the USS Gravely, when in the Baltic Sea and was published on July 10, 2019 by USNI News.

The U.S. Navy is leading a decades-old NATO maritime group, serving as a first-responder force in northern European waters and building interoperability among NATO allies while also re-learning lessons for the U.S. Navy about operating in that region.

Standing NATO Maritime Group-1, which constantly rotates participating ships and staff members, is currently being commanded by Rear Adm. Edward Cashman aboard flagship USS Gravely (DDG-107). Gravely will soon swap out with sister ship USS Gridley (DDG-101), but Cashman will continue to command the multinational unit until the end of the calendar year.

SNMG-1 is one of four maritime components of the NATO Very High Readiness Joint Task Force, Cashman explained, and if called upon it would be among the first on the scene to respond to an emerging threat or disaster.

“The alliance is such a mature structure, from doctrine and support structures and just the way that the alliance does business – everything is established, everything is written down, everything is really well supported, and it’s been a pleasure to fall in on that,” Cashman told USNI News during an interview aboard Gravely during the BALTOPS 2019 exercise.

“And the experience of all the allied nations in operating in a NATO construct, NATO doctrine, NATO procedures, to NATO standards, has really made this very easy in a lot of ways.”

Cashman said the group typically must be ready to respond to a crisis within 48 hours, and even during the turnover of one ship leaving the unit and another coming in the group must be able to respond in five days or less. NATO standards ensure that the hardware is interoperable, but Cashman as the task group commander must ensure that the people operating those systems can conduct multi-ship communications, emissions control, multi-ship warfare tactics, air defense with outside units, anti-submarine warfare with outside units, and more.

“Really it’s about the people; people are what really matters. The reason we need to keep doing it,” Cashman said.

“There’s an exercise program that’s designed to provide opportunities at increasing levels of complexity to train together in larger and larger groups, with air forces, and with other forces. And sometimes people ask, haven’t you done this enough?

Despite some cultural differences – such as U.S. Navy wardroom etiquette of asking the highest-ranking officer’s permission to join for a meal, which was a foreign concept to the international officers aboard – Cashman said the NATO navies generally have more in common than not and that the integration has been smooth.

SNMG-1 is not technically bound by geography, but Cashman said his focus is the Baltic Sea, the Norwegian Sea, and other High North waters such as the North Atlantic. He noted those areas have an anti-submarine warfare focus, though the ASW skills and gear needed in the Baltic versus the North Atlantic aren’t quite the same.

“It’s a very different environment, so the Norwegian Sea and the High North are deep water, open ocean, and usually the submarines that are operating there are larger nuclear-powered submarines, as opposed to small diesel SSKs in the relatively shallow water” in the Baltic Sea, for example.

His diverse task group, though, is equipped to handle both.

“The ships have a good mix of either towed-array, passive, passive or active systems, low-frequency and high-frequency active, helos – helos are a great asset – and then the ability to work with the maritime patrol aircraft. So the ASW assets that we have and that the aircraft have provide a good mix against both threats. Some are optimized for one, some are optimized for the other,” he said, noting that he can request extra assistance from maritime patrol aircraft or other platforms through NATO’s Allied Maritime Command (MARCOM) when needed.

As the security environment in the northern European waters evolves, so too has MARCOM and its priorities for SNMG-1, Cashman said.

“Part of our plan for this year is more operations in the Atlantic, operations with commercial shipping, operations transiting back and forth in the North Atlantic as part of an overall training and readiness program, relearning and refreshing a lot of skills that the alliance and the Navy’s had,” he said. Cashman added that MARCOM had transferred planning of exercises from its training group to the operational planners “so that training is aligned with contingency plans and crisis response and all sorts of things, and making sure that the activities we’re tasked with, the exercises build and contribute in a way towards those goals.”

Within SNMG-1, Cashman said he’s ensuring that they are focused on warfare against a peer adversary, even if it means eschewing traditional training events that a maritime group might conduct.

Cashman said his orders were to “focus on activities that are relevant to modern, high-end conflict that could potentially start now. So that means being able to change our sensor status to be detectable or not detectable from shore-based facilities or space-based facilities; being able to operate in a satellite-denied environment, GPS-denied environment or other things that we’re more likely to see against a peer competitor now. And we’re sort of phasing out some of the traditional things that are not as relevant to a modern fight as they used to be.”

He said the group is skipping over things like maneuvering exercises and communications drills, “all of which can be good and valuable training in a certain context, but eventually you have to prioritize what are the most important things to do, and if that means I turn off all my satellite communications and find secondary and tertiary ways to be able to communicate and operate the task group for a period of time, those are different skillsets.”

The U.S. military is certainly focused on that type of high-end maritime operation, as shown in last year’s National Defense Strategy, and Cashman said fellow NATO allies have made a similar shift in focus internally, too.

“I think everyone sees a common picture of the modern capabilities that they need. I think you see that in the investments that the nations are making in ships and systems, and I think that you see that in the way the training and certification programs are evolving over time,” he said.

BALTOPS provided a good opportunity to further enhance U.S./NATO integration and U.S. knowledge of that particular geography. With Cashman’s SNMG-1 participating as one of two main surface warfare task groups and Vice Adm. Andrew Lewis commanding the exercise as the head of the newly operational U.S. 2nd Fleet, American admirals are getting a good look at the region, its traffic patterns, its weather patterns, Russian presence and more to understand the intricacies of operating there in the future.

Cashman said the timing of having American admirals operating in the area is good, as the U.S. and NATO shift their focus as the security environment evolves.

“A lot of things that are happening in the U.S. – the standup of 2nd Fleet and Joint Force Command Norfolk; the defense strategy and the recognition of the need to focus on peer and near-peer competition, and the importance of the alliance and keeping those bonds really strong,” he said.

“And it’s been very impressive for me – the alliance sometimes gets criticism for being an old archaic bureaucratic process, and in many ways the evolution of MARCOM, the standup of 2nd Fleet and JFC Norfolk, the enhanced forward presence teams in the Baltic and the air policing mission, really demonstrate that as the security situation has changed.

“If you think about it, it’s changed several times from the mid-90s and early 2000s, through the mid-2000s when Russia was participating in BALTOPS and people were doing port visits in St. Petersburg, to where we are now.

“The alliance has actually changed and kept pace pretty flexibly and pretty well. It’s been impressive to see and meet all the people working to do those things, and just a real pleasure to work with the allies.”