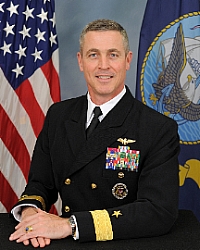 In our last interview with Rear Admiral Garvin, we focused on how the P-8 / Triton dyad was reshaping the approach of the airborne element of the anti-submarine network.

We spoke at length about how the Maritime Patrol and Reconnaissance Force (MPRF) could be recast into interactive webs that will empower more effective strike at the most critical point of attack.

In effect, what we see coming in the Pacific and in the Atlantic are interactive sensor webs that extend the reach of core platforms and their onboard sensors.

The fusing of multiple sensors via a common interactive self-healing web enhances the ability of the entire force, including key partners and allies, to cooperatively engage enemy targets in a time of conflict.

Interactive webs can be used for a wide range of purposes throughout the spectrum of conflict and are a key foundation for full spectrum crisis management. To play their critical role when it comes to strike, whether kinetic or non-kinetic, this final layer of the web needs to have the highest standards of protection possible.

As one analyst has put it: “The kill part of the web is crucial.

“However, there are many scenarios where the same web is needed, but for other purposes.

“The point is that the “web” facilitates alignment of sensing, C2, and actionable outcomes (i.e. – shooters of various types).”

The interactive webs enhance the reach of any platform within a task force and thus create synergy amongst non-contiguous assets that are combined against a specific threat.

Interactive webs also provide redundancy and depth for distributed operations and inherent resiliency and survivability that a convergent combat force simply will not have.

We started with a discussion of the reach of the maritime patrol enterprise by focusing on a way to conceptualize the way ahead for shaping an integrated distributed force.

If one conceptualizes the battlespace as layers of visuals placed one on the other, it becomes clear what is different in terms of leveraging the combat force within an interactive web.  The first layer would be the operational geography of the battlespace.

The second layer would be the threat elements most relevant to the blue force.

The third layer in the case of a maritime patrol enterprise would be commercial maritime shipping traffic.  Unlike air traffic, maritime traffic is very diverse, very large, and provides a key masking function for any adversary.

The fourth layer would be the laydown of blue assets, including the geographic distribution of allied forces in the region or area of interest. The fifth layer would then be where the P-8 / Triton dyad operates.

With such a schematic, it is quickly evident that if the U.S. Navy’s P-8 / Triton dyad is integratable with allied maritime patrol capabilities the reach of both the U.S. and allied interactive web capabilities is substantially enhanced.

It is also obvious that if key allies are not engaged then there are holes in the web structure which will either simply be gaps or need to be filled by other means.

In simple terms, it is clear that the United States and its allies must operate within a convergent set of interactive webs to shape a shared and actionable common operating picture.

The results will significantly empower a combined strike force and, even more importantly, inform decision makers about how to prioritize targets in a fluid combat situation.

There is a particular and often intellectually neglected part of this problem–the existence of offensive nuclear capability.

As an example, in the Pacific there are three nuclear powers. Nuclear deterrence is woven throughout any considerations of conventional operations, so there is a clear need to add a strategic overlay of the battlespace, which considers potential consequences and focuses on making the right target decisions in a fluid battlespace. This “wildcard” should give pause to those who tout AI enabled kill chains.

Decision makers need to step back and consider that while more rapid destruction of targets is important, it must be guided by both tactical and strategic decisions with due regard not just to combat but political effects as well in full spectrum crisis management. Having men in the loop in airborne systems, like the MPRF can certainly contribute to target discrimination efforts.

We also considered the specific challenges of the US Navy working with allies in the maritime patrol enterprise.

For obvious reasons, we first focused on those allies who have already joined the P-8 / Triton dyad effort.

We then discussed those allies who had not done so but are key partners in working interactive webs with the United States. Prior to highlighting that discussion, let me review who the P-8 / Triton partners are to date.

Australia is the only U.S. ally pursuing both the P-8 and the Triton. As a cooperative partner, similar to the F-35, they participated in the development of P-8A and Triton capabilities from the ground up with the USN.

The British have made a very welcome reentry into the Maritime Patrol and Reconnaissance arena with the P-8 as well.

During recent visits to RAF Lossiemouth, I saw the program being stood up in Scotland, and they were doing it in such a way that other P-8 partners would be supported as well.

At Lossiemouth I discussed the new infrastructure with key RAF officials responsible for the effort, and that interview will be published later but the key role of standing up new infrastructure to support this effort is crucial to handle the new data rich airplanes, as well as the work with allies in operating the assets.

Having visited Norway earlier this year and having discussed among other things, the coming of the P-8 and the F-35 in Norway, it is clear that what happens on the other side of the North Sea (i.e., the UK) is of keen interest to Norway.

And talking with the RAF and Royal Navy, the changes in Norway are also part of broader UK considerations when it comes to the reshaping of NATO defense capabilities in a dynamic region. The changes on the UK side of the North Sea are experiencing the standup of a P-8 base at Lossie, which will integrate with US P-8 operations from Iceland and with those of Norway as well.

In effect, a Maritime Domain Awareness highway or belt is being constructed from the UK through to Norway.

A key challenge will be establishing ways to share data and enable rapid decision-making in a region where the Russians are modernizing forces and expanded reach into the Arctic.

The Pacific partnership is being expanded as well with the addition of South Korea.

In 2018, the South Korean government announced that would purchase six of the aircraft.  They are thereby joining India, which has its own systems configured on the aircraft. India first P-8I squadron was stood up at Rajali in November 2015.

The Indian Navy operates its entire fleet of eight P-8I maritime patrol aircraft from Rajali and the Indian government announced last year that they intended to buy 10 additional P-8s.

With regard to the P-8 / Triton partners, Rear Admiral Garvin highlighted the opportunities for co-learning, which are generated from common training that occurs at VP-30 and the Maritime Patrol and Reconnaissance Weapons School at NAS Jacksonville, Fl.

He highlighted the famous quote, “You cannot surge trust.”

The working relationships built during high-end tactical training carry over into operations whereby a global community of operators can share operational experience and enrich development of the enterprise.

“My first international visit upon taking command was to Australia, leadership there referred to our working relationship as “mateship.”

“This term accurately describes the collaborative nature of our partnership and demonstrates its importance to ourselves and the rest of the world.”

“We have built similar relationships on varying scales, all around the world.

“These relationships serve as force multipliers, which opens the door to cooperatively leverage technology to deliver networked sensors and a shared understanding of the decisions and options we share across the extended battlespace.”

“Our allies understand the fundamental nature of their region better than we do.

“If you have properly maintained these important working relationships, both interpersonal and technological, then you will have access to the cultural knowledge and human geography that might otherwise would not be available to you.

“We become stronger interactively with our allies by sharing domain knowledge to operate across a wider geographical area.”

“In effect, we are shaping kill web “matesmanship.”

“We clearly have closer relationships with some allies than with others, which shapes policy and data sharing. However, the technology is now out there which can allow us, within the right policy framework, to provide data at appropriate security levels much more rapidly than in the past.

“Our policy frameworks simply need to catch up with our technologies.”

“History has shown us that it is infinitely more difficult to sort out our working relationships in times of intense conflict.

“Those partnerships need to be nurtured and exercised now to help shape our interactive webs into a truly effective strike force over the extended battlespace.”

For Rear Admiral Garvin, working with partner and allied maritime patrol partners is crucial, even when those close partners are operating different platforms.

For example, Japan indigenously developed their own replacement aircraft for its legacy P-3s. He highlighted the healthy sharing arrangements the U.S. Navy has with the Japanese Maritime Self-Defense Force in the MDA area.

Similarly, we enjoy a very close relationship with Canada, who operates a significantly modernized P-3, the CP-140 Aurora. He noted that the aperture for increased cooperation with India was opening up as well, a process which he clearly welcomed.

As Rear Admiral Garvin put it: “Put simply, the idea of partners and allies sharing in the web you describe must have, at its core, that underlying, underpinning relationship built upon trust.

“Sometimes buying the same kit does make it easier. But without that relationship it doesn’t matter if you bought the exact same kit.”

Visiting RAAF Edinburgh: An Update on the Aussie P-8 Enterprise

The Return of ASW: The Canadian Perspective

Enhancing Northern Tier Defense: The UK and Norway Prepare for the Coming of the P-8