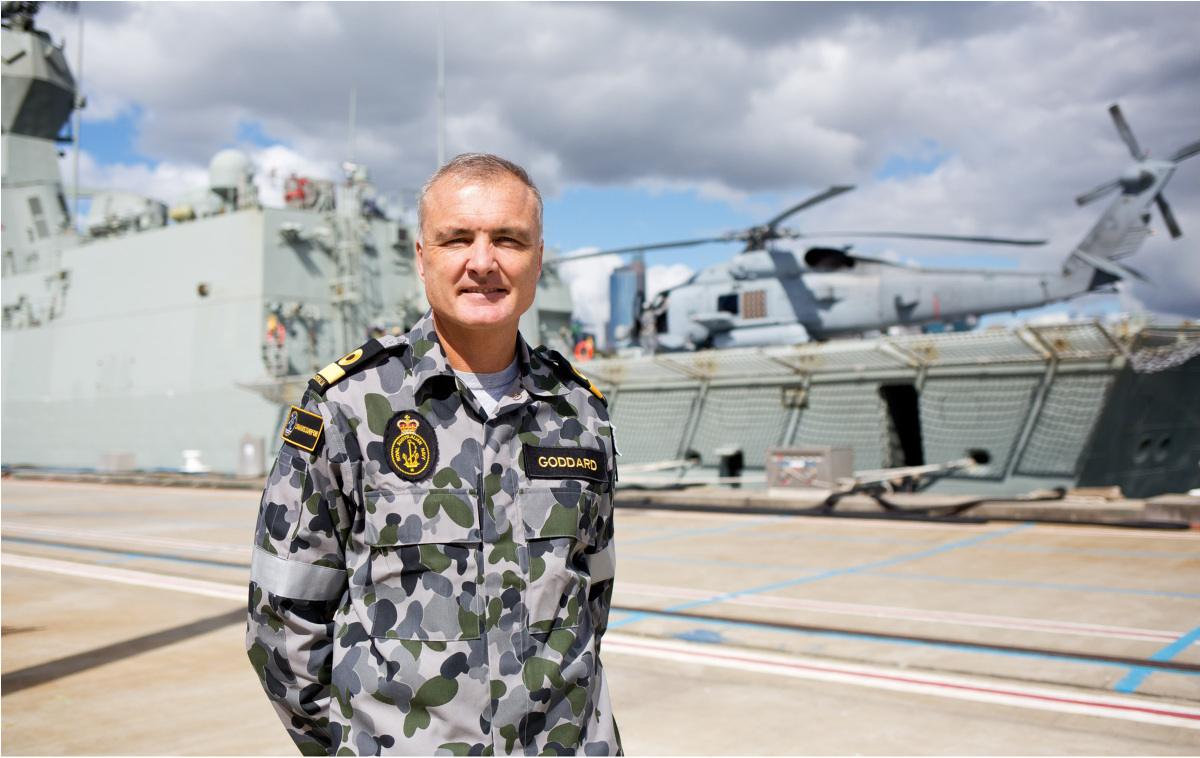 During my recent stay in Australia in April 2019, I had the chance to meet with RADM Lee Goddard, Commander of the Maritime Border Command.  His command oversees the operational side of ensuring maritime security for Australia.

Because Australia has no land borders, dealing with challenges like migration, drug smuggling and a variety of gray zone threats, the Maritime Border Command is a major player in operations to ensure Australian sovereignty on its borders.

It does so by a whole of government approach, which includes the ability to use defense assets as a key part of its operational approach. It really is designed to provide for integrated operations to try to optimize Australian security, in a very challenging environment.

The challenge simply starts with how extensive the sea borders are around Australia.  We focused in our meeting on the Northern waters and the challenges associated with those waters. But the broader picture is even more daunting in terms of surveillance and determining paths of action.

The reach North to New Guinea is where Australia almost reaches the land of a neighboring country. To the North is a key SLOC where significant trade comes into Australia, and to the West are the Malaccan straits.

We discussed challenges associated with the Lombok Strait, the strait connecting the Java Sea to the Indian Ocean, and is located between the islands of Bali and Lombok in Indonesia. The Gili Islands are on the Lombok side.

Its narrowest point is at its southern opening, with a width of about 20 km (12 miles) between the islands of Lombok and Nusa Penida, in the middle of the strait. At the northern opening, it is 40 km (25 miles) across. Its total length is about 60 km (37 miles). Because it is 250 m (820 feet) deep[1] — much deeper than the Strait of Malacca — ships that draw too much water to pass through Malacca (so-called “post Malaccamax” vessels) often use the Lombok Strait, instead.

The Lombok Strait is notable as one of the main passages for the Indonesian Throughflow that exchanges water between the Indian Ocean and the Pacific Ocean.

The importance of this strait and the other straits coming into Australian waters is determined both the need to protect Australian territory and the security and safety of its maritime trade.

To provide for Australian maritime security, the focus has been upon three strategic directions.

First, the Australian government has a very clear set of regulations and laws governing immigration and approaches to dealing with security at sea.

As Rear Admiral Goddard put it: “I can act on suspicion; which allows us to be proactive in dealing with threats.”

Second, the force is organized as an integrated one, so that new capabilities coming into the ADF, like the P-8, Triton, Offshore Patrol Vessels and new frigates and other Australian Border Force assets can be leveraged as necessary for operations.

Operation Resolute is a combined force approach to providing for perimeter defense and security of Australia.

As it was put on the Royal Australian Navy website:

Operation RESOLUTE is the ADF’s contribution to the Whole-of-Government effort to protect Australia’s borders and offshore maritime interests.

It is the only ADF operation that currently defends the Australia homeland and its assets.

The Operation RESOLUTE Area of Operations covers approximately 10 per cent of the world’s surface and includes Australia’s Exclusive Economic Zone which extends up to 200nm around the mainland. Christmas, Cocos, Keeling, Norfolk, Heard, Macquarie and Lord Howe Islands also fall within the Operation RESOLUTE boundaries.

Commander Maritime Border Command (MBC) is the overarching operational authority that coordinates and controls both Defence and Australian Border Force assets from his headquarters in Canberra.

“It does no good just to know something is happening; how do we observe but let the bad guys know we see them and can deal with them?”

Third, obviously IT and C2 are key elements of bringing the force to bear on the threats.

But doing so is a significant challenge, but one where new technologies and new capabilities to leverage those capabilities for decision making clearly are helping.

This is a work in progress where the Commander works with several government departments as well as industry to deliver more effective intelligence to determine where the key threats are to be found and being able to deploy assets to that threat.

Rear Admiral Goddard underscored that developments in the IT and decision tools area were already helping and would be of enhanced performance in the period ahead.

“With some of the new AI tools we will be able to process information more rapidly and turn SA into better decision making.”

Fourth, obviously this means working closely with partners in the region, such as Malaysian, Indonesia and the Philippines and shaping ways to operate more effectively with one another.

There are several examples of Australia expanding its working relationships with neighbors, which means as well finding ways to share information and to train together for common actions. A challenge being posed by the Navies in the region is that they are clearly are generating what have been called gray zone threats.

This is why the Command is really part of more broadly understand security capability within an overall national crisis management effort.

And as the threats change or challenges change, the capabilities for the Command working with the ADF will need to change as well.

The description of the Command as provided on their web page is as follows: Additional information was then provided as follows:

We use surveillance and identification systems such as the Australian Maritime Identification System to detect, risk assess and track vessels operating in or approaching our maritime zones.

We then tailor our operations to combat these threats with the support of surface and air assets.

We detect and intercept people-smuggling vessels that approach Australia, and carry out on-water operational responses including boat turn-backs where safe to do so.

We also collaborate with international intelligence and law enforcement authorities through information sharing, joint patrols and other cooperative arrangements.

Maritime Border Command engages with industry by communicating with industry to advise of maritime actions that may impact on their businesses and advising of appropriate preventive security measures.

By complying with preventive security measures, the maritime industry also contributes to the ongoing safety of our maritime domain.

Rear Admiral Lee Goddard  was promoted to his current rank and became the Commander Maritime Border Command in February 2019.  Prior to this he was seconded as a Branch Head to the Department of Prime Minister and Cabinet.

Lee Goddard joined the Royal Australian Navy (RAN) in 1987 from Melbourne through the Australian Defence Force Academy where he completed his degree studies graduating with a Bachelor of Science in 1989. In his final year he was appointed as the first Naval Academy Cadet Captain and was awarded the RSL Sword of Leadership on graduation. In the following year while completing Seaman Officer training at the RAN College (Jervis Bay) in 1990 he was appointed College Captain and awarded the Queen’s Medal.

Throughout his career he has served at sea in Australian, Canadian, Malaysian and US Navy warships, and on operations in the Middle East. He gained his Bridge Watch-keeping Certificate in early 1992 while serving on exchange with the Canadian Navy, in HMCS Yukon based in Victoria, British Colombia. Later in 1993-1995 he served as a Watch/Executive Officer onboard Australia’s national tall ship STS Young Endeavour and he has been posted overseas to Malaysia and Bahrain.

In 1996 he completed the RAN Principal Warfare Officer’s course where as dux he was awarded both the Sydney-Emden prize and the RAN Sword of Excellence.  He was a member of the commissioning crews of the ANZAC Class frigates HMAS Arunta (Warfare Officer) during 1997 – 1999 and HMAS Stuart (Executive Officer) during 2001 – 2003.  During 2006-2008 he commanded the ANZAC Class frigate, HMAS Parramatta, and the ship was awarded the Duke of  Gloucester Cup in late 2008.   Lee Goodard was awarded the Conspicuous Service Cross (CSC), on Australia Day 2007, for service as the commander operations in the maritime component of Joint Operations Command.

Following on from his first sea command in 2008 he was appointed Commander Sea Training.In 2009 he was posted as an inaugural member of the ‘New Generation Navy’ Team, as the Deputy Director Transformation & Innovation working closely with the Nous Group that reported directly to the Chief of Navy.

He was then selected to attend the US Naval War College in Newport Rhode Island, where he joined the Naval Command College, graduating in June 2010 and was awarded the War College’s International Leadership Prize. He was subsequently asked to remain at the War College as an International Fellow, teaching within the Department of Strategy and Policy at the Masters level.

On his return to Australia in early 2011 he was appointed as the Director Military Strategic Commitments at the Australian Defence Headquarters, working within the strategic level of Defence and across Government. He returned to sea in late 2012 to assume command of the upgraded Anzac Class warship HMAS Perth. On promotion to commodore in late 2014 he assumed the role of Commander Surface Forces.

Rear Admiral Goddard was awarded a Master of Arts (International Relations) in 1996, is member of the Australian Naval Institute council and has previously served as councilor with the Australian Institute of International Affairs. He has contributed to a range of professional and academic journals focused on international affairs and security issues.