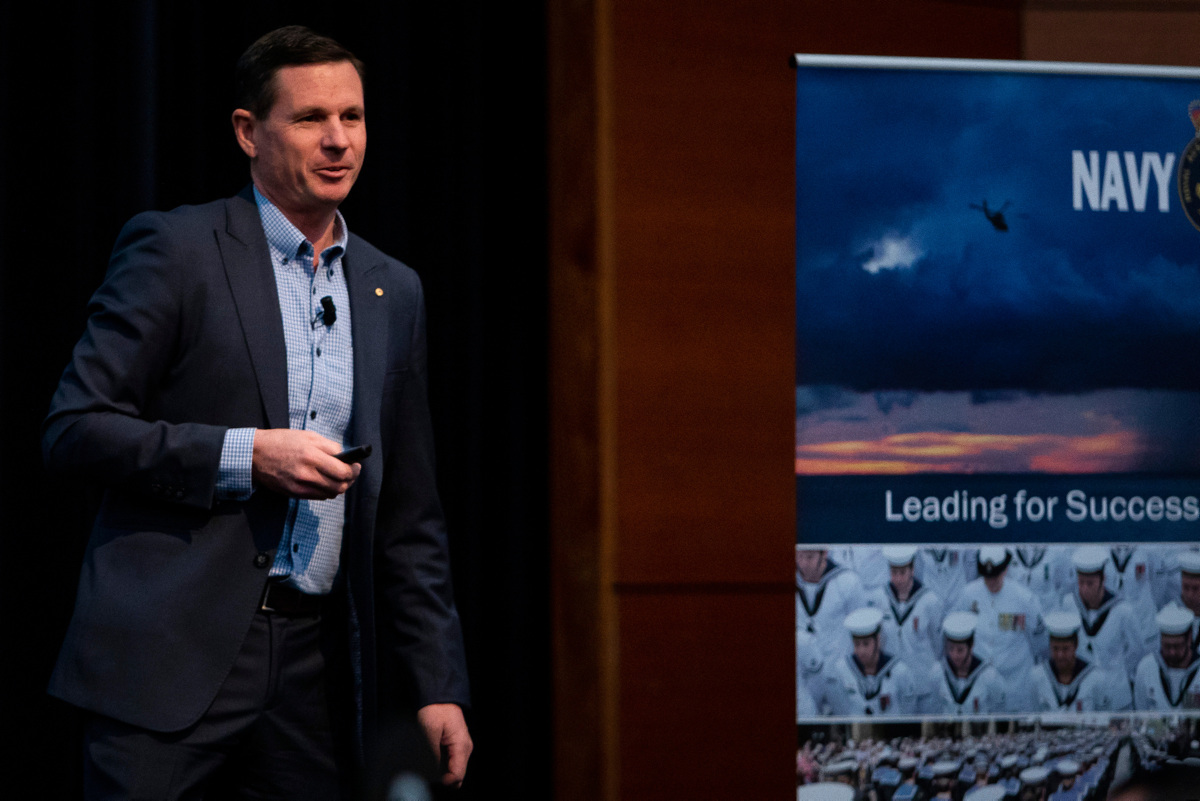 The Australian new build submarine – the Short-Fin Baracuda – is being designed to operate in within the evolution of the ADF and of the shipbuilding context.

There are three key elements of change shaping the operational context within which the Attack Class submarine will enter the force.

The second will be the rollout of maritime remotes as part of the kill web within which ASW will evolve, with sensor networks mutating and migrating through the arrival of artificial intelligence systems working networked sensors and with sensors themselves evolving to allow for direct interactivity among the sensor themselves.

The third is migrating the skill sets and innovations generated in this decade from the continued evolution of the Collins Class submarines.

During my visit to HMAS Stirling, in March 2020, I had a chance to discuss with submarine commander Robin Dainty, the question of the evolution of the Collins Class submarines.

“The demand side and the concepts of operations side of innovation affecting the naval forces will be very significant in the decade ahead. This will be a very innovative decade, one which I have characterized as building the distributed integrated force or the integrated distributed force.

“What this means for the submarine side of the house and for ASW is working new ways to cooperate both within national navies and across the air-naval-land enterprise of the allied forces.

“The decade will see new ways to link up distributed assets to deliver appropriate effects at the point of interest in a crisis.

“It will involve working new weapon and targeting solution sets; it will see an expansion of the multi-mission responsibilities for platforms working in the distributed force.

“And the Collins class will be participating in this path of innovation and lessons learned as well as technologies evolved both on the ship or the extended battlespace enabling the evolution of an integrated distributed force.”

When back from Australia, I had a chance to talk with the Deputy Chief of the Royal Australian Navy, RADM Mark Hammond.

Our conversation was to have taken place during my visit to Australia in March 2020, but COVID-19 raised its ugly head and that face-to-face conversation did not happen. We were able to talk by phone on April 28, 2020 about the context issue for the new build submarine.

RADM Hammond started by talking about the Australian context of submarine capability in terms of the significant range and endurance challenge posed by the Indo Pacific Theater through which Australia’s lifeblood or maritime trade flows.

He then highlighted that during WWII the US conducted over 500 submarine operations across this Theater from Australia using S-class, Gato class, and Balao class submarines.

RADM Hammond noted that the Gato and Balao class were able to operate effectively at long distances across the Indo Pacific (as far north as Japan) from ports in Australia, but had to do so largely in surface transit mode for significant parts of the operation and only remaining submerged for short periods.

The smaller S-class lacked the endurance for this mission and were employed largely around the Solomon Islands and in areas close to the equator.

The Gato and Balao “Fleet boats” truly came into their own during the campaign and elements of their design arguably inform the ‘range and endurance’ DNA for successful conventional submarine operations from Australia today.

The Oberon class submarines operated by Australia from the late 1960s until 2000 were of similar but evolutionary capability, designed to transit at relatively high speed on the surface to an operating area, whereupon they would dive for more extended periods to conduct exercises and operations.

In an era predating effective broad area surveillance threats, this could be risk-managed and effective.

But “to emulate that capability today requires a bigger submarine because the entire deployment, including at nighttime, has to be undertaken under water because the environment has changed.

“Today anything on, or above, the surface of the ocean is liable to detection and targeting. And a submarine that has been detected and targeted is not very useful. As simple as that.”

We then discussed the impact of Collins modernization throughout the period of transition to the new build submarine.

“We are taking a continuous learning mindset that views the life cycle extension for Collins as an opportunity.

“It’s an opportunity to de-risk the future submarine program.

“It’s an opportunity to trial some technologies that will be integral to the future submarine program.

“And it’s certainly a mindset that recognizes that we must maintain lethal operational capability during the transition period.“

We then discussed the context for the new submarine which is being generated by innovations in theater ASW in the decade ahead.

“The Attack Class submarine will be a fully interoperable ADF asset optimized to survive and thrive in the contemporary and future ASW threat environment.

“This means deliberately designing for interoperability with our own forces, our partners and our allies.

“It also means integrating in the design and construction methodologies the options and margins to enable future capability enhancements.“

“In my view, our Future Force must be designed to safely and effectively operate in the ‘environment of relevance’ and fight at the ‘speed of relevance’.

“Neither of these reference frames are static, and both are ambiguous. But failure to consciously consider and mitigate the risks posed by either will lead to inferior capability”

We next discussed the Arafura Class OPV template, its impact on the future submarine program and the integration of maritime remotes into the future combat environment.

“The Arafura OPV has a great deal of inherent design flexibility – especially wrt its capability to employ unmanned and remote sensors.

“With regard to the future submarine program, we’re looking for similar opportunities.

“But future proofing in a submarine design is a different challenge than doing the same in a surface vessel.

“The goal is the same though – to enhance through life relevance, recognizing the environment and speed of relevance are going to continue to change.

“In this context the more flexibility you have to upgrade sensors and weapons through life, the greater your capacity to maintain relative operational effectiveness and to exploit tactical advantages of the platform in the evolving threat environment.”

Obviously, this approach will also reduce the time to modernize and enhance cost effectiveness of the ongoing upgrade cycle as well.

“The design approach for the future submarine fully embraces the evolution of maritime remotes in the maritime combat environment.

“We are working through the role of maritime remotes within the ADF, and as we develop that experience, we will fold that into the operational employment doctrine for the future submarine as well.”

And we concluded by discussing the impact of COVID-19 on perceptions of what Air Vice Marshal (Retired) John Blackburn refers to as Smart Sovereignty.

As RADM Mark Hammond put it: “I think in the age of COVID-19, it is likely the decision made by our island nation to establish an Australian national sovereign shipbuilding program, supported by largely sovereign supply chains, will be recognized as the right approach for Australia.”

Rear Admiral Mark Hammond joined the Royal Australian Navy in 1986 as an electronics technician. He was commissioned as a naval officer in 1988 and is a graduate of the RAN Recruit School (1986); the Australian Defence Force Academy (1990); Australian Command and Staff College (2004); and the Centre for Defence Strategic Studies (2014).

Rear Admiral Hammond completed seamanship and navigation training in various ships then volunteered for submarine service. Qualifying in Oberon Class submarines in 1994, Hammond joined HMAS Collins as Navigating Officer in 1996 (during First of Class Trials), and was selected as Flag Lieutenant to the Chief of Navy.

He subsequently completed the Principal Warfare Officer’s Course and Submarine Warfare Course in 1998, and served as the commissioning Operations Officer in HMAS Waller. In 2001 Rear Admiral Hammond instructed the Submarine Warfare Officer Course and assumed duties as Executive Officer in HMAS Sheean. In 2003 Hammond completed the Netherlands Submarine Command Course (Perisher) and the US Navy’s Prospective Commanding Officer Course.

Rear Admiral Hammond served as Staff Officer Future Concepts at Naval Headquarters in late 2003, and graduated from Command and Staff Course in 2004. Hammond then deployed on operations with the Royal Navy Submarine force, before assuming command of HMAS Farncomb and completing two years of demanding operations in the Indo Pacific region.

In late 2014 Rear Admiral Hammond was appointed as Director General Maritime Operations, exercising OPCON of the Navy’s ships, submarines and detachments, before relocating in 2017 to the United States for duties in the Pentagon as the Chief of Defence Force Liaison Officer to General Joseph Dunford, the Chairman of the US Joint Chiefs of Staff.

Rear Admiral Hammond returned to Australia in March 2018 to assume duties as the Deputy Chief of Navy.