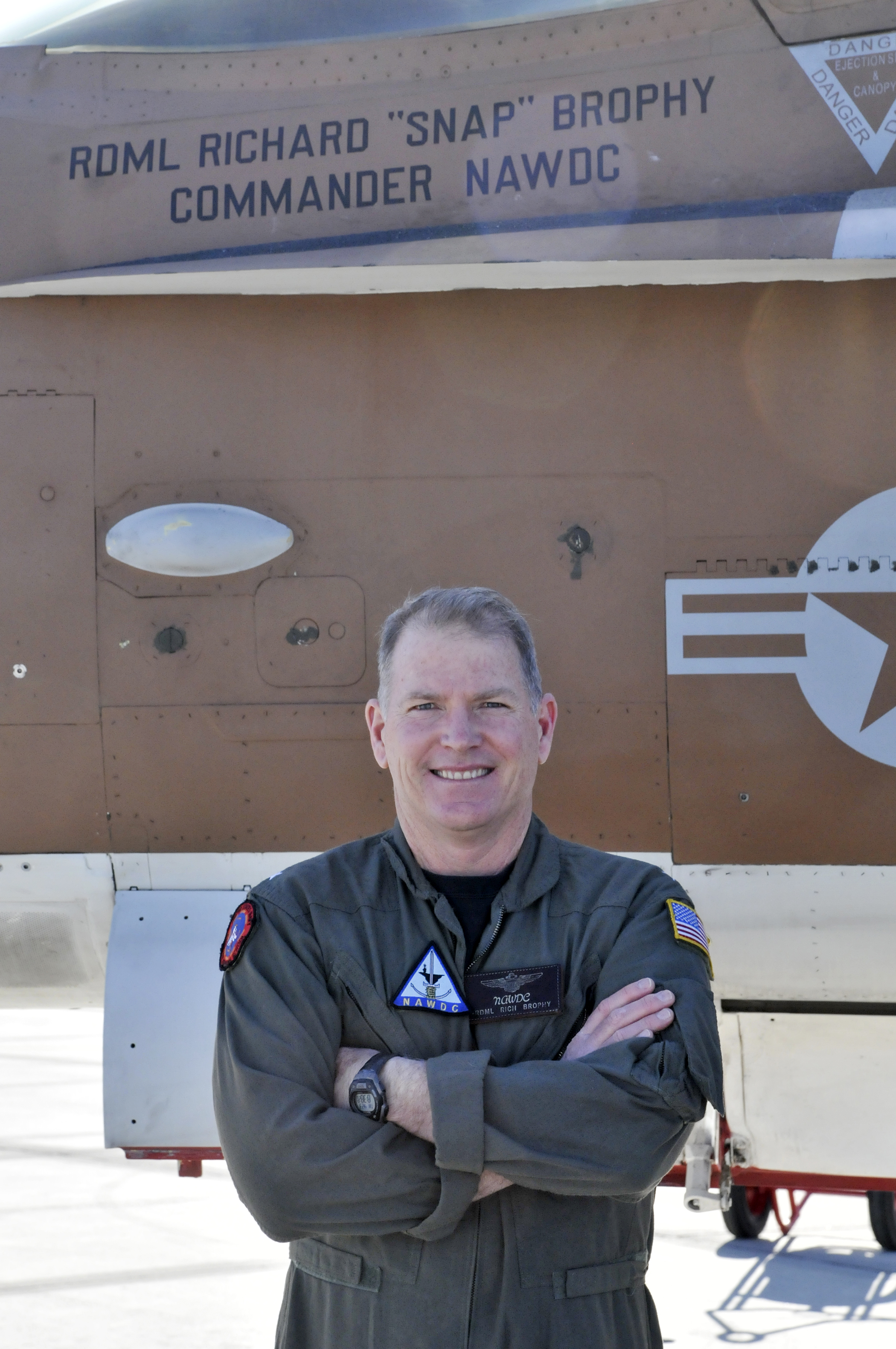 The US Navy is in the throes of reworking its capability to prevail in the high-end fight while ensuring its ability to engage in full spectrum crisis management.

There is no clearer proof of this judgment than the latest efforts at the Naval Aviation Warfighting Development Center (NAWDC).

Most people know this as TOPGUN and envisage Tom Cruise-type characters preparing for air combat somewhere in global conflict.

But today’s NAWDC is focused not simply on training for the integrated air wing, but the integratable air wing engaging in leveraging and enhancing fleet-wide operations and working closely with joint and coalition force partners.

As the center of excellence for Naval aviation training and tactics development, the Naval Aviation Warfighting Development Center or NAWDC works to ensure an effective, integrated, and lethal force to prevail against increasingly sophisticated adversaries.

In a way, with the coming of a new generation of aircraft, Advanced Hawkeye, Triton, P-8, MQ-25 and F-35, the reach of the carrier air wing is beyond the range of the integrated air wing.

And NAWDC is an epicenter of practical ways to build out today’s navy into an effective integrated distributed force capable of operating as interactive kill webs delivering effective strike, defense, and deterrence against adversaries in the global “commons,” as it used to be called.

Over the past few weeks, I have had the chance to have a series of teleconferences with the department heads at NAWDC prior to my visit to the desert-based air wing during the week of July 5th. I will provide articles based on discussions during that week later this summer.

But in this article, I would like to focus on my discussion with the CO of NAWDC, Rear Admiral Richard Brophy.

I would note that after my time in the desert, I flew to San Diego where I had a chance to meet with the Navy’s Air Boss, Vice Admiral Miller, and to talk with the new commander of the Osprey squadrons coming into the Navy as well as to a senior Romeo commander as well.

The discussion with Rear Admiral Brophy started with a simple question: “Obviously, NAWDC is in significant change, and your job seems to be to expand the dialogue between NAWDC and the rest of naval warfighting centers as well as the USAF and the USMC and with allies. How would you describe your job?”

Rear Admiral Brophy: “Admiral Miller gave me the following charge when I took command: ‘Snap’, when you go there get us in a great power competition mindset. From a wholly-integrated perspective, look at what we need to do at NAWDC in order to win the next fight.’”

“And to do this he emphasized that my job was to pursue holistic training with the Navy and to work with other U.S. warfighting centers and key allies.”

In other words, NAWDC is focused on training the integratable air wing.

During my visit, several key developments stood out.

First, there is a re-imaging of the carrier going on associated with the return to blue water operations and rethinking how the carrier works with the fleet to deliver enhanced expeditionary reach that the carrier air wing can support.

This has meant a growing working role with the Marines, who in Rear Admiral Brophy’s words “have significant experience and expertise with expeditionary operations, and with whom we can collaborate to develop new concepts of operations.”

Rear Admiral Brophy underscored that there was clearly an enhanced working relationship with MAWTS-1 at Yuma MCAS going on as a result.

Second, this has meant that the US Navy and the USAF are establishing new ways to work more effectively together.

As we noted earlier about WESTPAC: “The USAF led a joint exercise in January 2020 focused on the Western Pacific. The exercise had the stated purpose of distributing airpower throughout the operational area and working integratability to shape the desired combat effect.”

Rear Admiral Brophy noted about WESTPAC: “The USAF invited NAWDC to the exercise to represent the Navy, and we went with a full complement which included surface and subsurface officers.

“The co-chair of the WESTPAC working group was a Surface Warfare Officer who had a clear notion that we need to look beyond what the Navy brought to the fight in order to be effective in our Pacific mission.”

Third, the theme of integratability beyond the carrier air wing is a key one being worked at NAWDC.

“Everything we do here now is based off of a single lens: does it move the needle for great power competition or not?”

Fourth, an integrated training center has been built from the ground up to support the integratable air wing to train in the kill web space.

After the interview we toured the new facility which consists of two buildings.

The first building is a meeting center with areas for working groups to meet at various levels of security within a global teleconferencing framework, as the need demands. This building can allow for scenario generation, assessment of findings and evaluations from the physical test range, or utilization of the simulated test range that is contained in the second building

The second building houses multiple simulators for different platforms being flown by the fleet. As Rear Admiral Brophy put it: “We’re going to put in an entire Air Wing’s and strike group’s worth of simulators.”

The focus is not only on platform learning, but significantly, working in an integratable environment. Those specific simulators, continued in various rooms in the building, can be linked with outside simulation facilities as well.

As Rear Admiral Brophy put it about the new facilities and their contribution: “The Integrated Training Building will be the future of virtual and constructive training for the majority of naval aviation.

“Not only will we provide cutting-edge training in Fallon, but fleet concentration areas will be able to train remotely with the Subject Matter Experts (SMEs) at NAWDC in a virtual, constructive environment at any time, day or night.”

Fifth, even with the new facility, changes are necessary with the physical ranges to adjust to the high-end training of fifth generation warfare.

There are requests in to adjust the ranges to accommodate the kind of targeting challenges which the high-end air arm needs to train for to prevail in the high-end fight.

“Fallon is the only United States Navy facility where an entire air wing can conduct comprehensive training while integrating every element of air warfare.

“While aircraft and weaponry have evolved substantially in the last several decades, the ranges at Fallon have not changed significantly in size since 1962.

“Our naval aviators use the desert skies to learn critical warfighting skills necessary to defend our nation and preserve our way of life from those who would want to cause us harm.

To that end, we are working with the local community, as well as natural and cultural resource experts, to find a way forward together to expand the range.”

Sixth, a measure of the change at NAWDC has been the generation of working groups based at NAWDC that reach out to the fleet to devise and implement new ways to operate in the evolving strategic situation. COVID-19 has slowed down this process, but the trajectory is clear.

For example, in the first quarter of this year, NAWDC sponsored work with the other Navy warfighting centers to address the question of fleet-wide TTPs to execute maritime strike.

The purpose here is clearly to think beyond the classic airwing focus to a wider integratable air wing in support of fleet-wide operations.

Clearly, the new infrastructure highlighted above would be a key asset in shaping such new TTPs for the fleet and its integratability into the joint and coalition force.

Seventh, the new MISR or Maritime ISR warfighting center is managing an important new Navy exercise, Resolute Hunter, which is focused on the evolving role of ISR and sensor networks in guiding C2 and integrated operations going forward.

The second such exercise will be held in November of this year, and will include Australians, Brits, Marines, and the USAF.

As Rear Admiral Brophy put it: “In the Resolute Hunter exercise, we are really looking hard at the Kill Web aspect and focusing on utilizing every asset that’s out there to ensure that we’re the most effective warfighting force we possibly can be.”

Taken together, the work of MISR, the Information Warfare program, Resolute Hunter, and the work with the Marines and the USAF, highlights the challenge and opportunity for shaping a Maritime Squadron Targeting Concept.

This is a clear expression that NAWDC and the Navy are focusing on ways to leverage an integratable air wing for the fleet, and for the joint and coalition force.

As Rear Admiral Brophy put it: “What exactly do 21st century fires look like from a Maritime perspective?”

Eighth, Rear Admiral Brophy underscored how important it was to ensure kill web capabilities and effectiveness.

A distributed fleet without integratability delivered by interactive kill webs would weaken the force.

It is crucial to ensure that a distributed force has ready access to fires across the joint and coalition force to ensure combat dominance.

A kill web approach is not about having distributed orphans across the extended battlespace, but an integrated honeycomb force.

In short, NAWDC is a key epicenter where the current force is becoming more capable and lethal, and the aperture of the integratable air wing has been opened to provide a key venue for the kind of force transformation needed for full spectrum crisis management dominance.

Note: I should note that I closely adhered to the CDC COVID guidelines during my travels and would note that in both the airports and on the airplanes, the travelling public and the airlines staff clearly were concerned to do so as well.

This is a good sign for the recovery of air travel for sure.

But I would not that with air traffic at around 50% at most of pre-COVID-19 levels, don’t expect some of your favorite direct flights to be available.