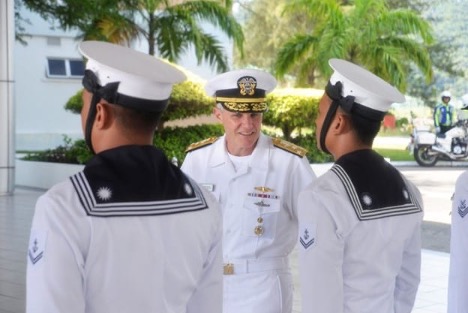 Speaking at the NDIA Expeditionary Warfare Conference on Feb. 2, Sawyer, the deputy CNO for Operations, Plans and Strategy, said enduring means as a maritime nation, “the sea control and power projection mission hasn’t changed in 200 years, but the way we do it today has.”

The Navigation Plan 2020, released last month by CNO Adm. Mike Gilday, and the Tri-Service Maritime Strategy released last year, assert that the U.S. and Navy are “involved in a long-term competition that threatens our security and our way of life.  Russia and China are both undermining the free and open conditions that has enabled the world to largely prosper since the end of World War II…”

According to Sawyer, DMO is geographically distributed naval forces integrated to synchronize operations across all domains. “DMO is a combination of distributed forces, integration of effects, and maneuver. DMO will enhance battle space awareness and influence; it will generate opportunities for naval forces to achieve surprise, to neutralize threats and to overwhelm the adversary; and it will impose operational dilemmas on the adversary.”

A key capability to achieving DMO is the Naval Operational Architecture, which Sawyer said will enable decision superiority at speed in a high-end fight. “It’s the connective tissue between sensors, platforms and weapons, and its central to our DMO operating concept,” Sawyer said. It’s more than “every sensor connected to every shooter.”

It includes the infrastructure (computing power and data storage); the network (data links, antennas, routers, and protocols); a data architecture and a data strategy; and finally, the tool (tactical decision aids to help analyze and display data with understandable and actionable information to the operators).

The ability to communicate and share information is critical in a contested environment, he said.

Another DMO imperative is logistics, and an enterprise to operate and sustain us in a contested space. That will require new platforms, manned and unmanned, to sustain small, dispersed units far to the front.

DMO is not a Navy or Marine Corps problem. “DMO is a naval concept.  Navy and Marine Corps integration is pivotal to us winning the high-end fight, particularly in the Pacific,” Sawyer said. “In the future, the Marine will be able to project power in order to support sea control or sea denial efforts.”

Sawyer said the Navigation Plan fully supports DMO, and fueling those capabilities necessary to fully realize the DMO concept. “New capabilities are important. But while the fleet waits for the introduction of these capabilities, we are moving out and exercising with what we have.”