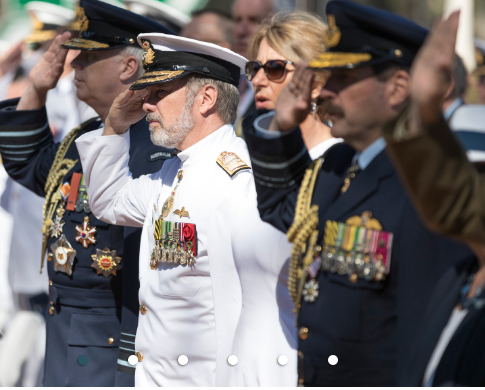 During my most recent visit to Australia in March 2018, with a clear focus on supporting the Williams Foundation effort to look at strategic transition facing the allied militaries, I had a chance to continue my discussions with Vice Admiral Tim Barrett, Chief of the Royal Australian Navy.

The Vice Admiral was very visible during my week in Canberra as he presented at both the RAAF Airpower 2018 Conference as well as at the Williams Foundation Conference.

Prior to those presentations, I had a chance to meet with him in his office to get his perspective on the way ahead.

The challenge for the Australian Navy is that it is starting a significant recapitalization effort in the wake of the modernization of the RAAF, but Vice Admiral Barrett and his team have clearly focused on Naval recapitalization which leverages and aligns itself with the fifth generation warfighting transition being spearheaded by RAAF modernization.

It was clear from his presentation at the Williams Foundation that the threat of high tempo ops and high intensity conflict could emerge from either deliberate or inadvertent actions in the region.

As he put with regard to the future: 50% of all submarines and advanced aircraft will operate in the region, and the challenge from the illiberal states building up capability or deliberately subverting the global peace is a clear one.

And one for which Australia must be prepared.

In the discussion we had in his office, he highlighted the challenge of being prepared and reshaping the Navy in the context of a modernized Australian Defense Force (ADF).

The broad point is simply gaining public understanding and appreciation for how important the maritime domain is for Australian national interests, indeed for the Australian way of life.

“We sing about Australia being a sea nation. It’s in the fourth line of our national anthem.  But most people don’t look beyond the breakers.

“They don’t realize the significance of maritime trade.

“But more importantly they don’t understand the significance of what, not just Navy, but Air Force is doing at the moment in terms of representing the national in keeping the sea lanes open in our region.”

He emphasized in his presentation at the RAAF Airpower Conference and in our discussion the importance of standing up a significant industrial capability in Australia to generate the modernization necessary for the navy.

This was true on several levels for the Vice Admiral.

The first is the need to shape an industrial base that is not building a current ship, but evolving the skill sets to design, support and build the next ship.

It is about continuous shipbuilding; not simply building a ship.

“I like to think that our regeneration is not just around platforms for today, but it is around recognition of where we will need to adapt and evolve over the next 30 to 50 years.

“The ship building model that we’re bringing into place now needs to be a catalyst for our future figures and future submarines.

The second is clearly related to the changes in the strategic environment whereby Australia clearly will need to sustain its force in a time of crisis.

It is about mobilization and support or what one might call sustainment in the context of a contested environment.

The Vice Admiral noted in his comments at the Williams Foundation that high intensity conflict is not about separate services showing up and doing their best; it is a test of the capabilities of conflicting military systems.

The third point flows from that realization, namely that building out of navy clearly needs to be done in broader multi-domain systems approach.

He argued that the decisions being taken with regard to the battle management systems onboard the fleet were being taken from the standpoint of enhancing collaboration across the fleet and across the ADF, more generally.

“We made a significant decision last year concerning our future combat management system and we did not take this with just regard to the new Frigate, but with regard to the current Air Warfare Destroyer and we are focused on our ability to combine the efforts in a distributed sense.

“This will need to encompass  our offshore patrol vessels, our supply vessels, but also out LHDs, in terms of how we will provide a domain awareness across the battle space.

“We centered on Aegis with the view that that will be part of an engaged battle space awareness with Air Force. You spoke earlier about the U.S. Navy and the approach of JSF and where they will go with Aegis.  We have that same view.

“This not just this piece of equipment, it’s a lineage.”

In earlier discussions with Vice Admiral Barrett, he underscored the importance of shaping maritime capabilities, which can operate at the national task force level, rather than simply providing a ship to a larger ally’s task force.

He argued in our discussion this time that Australia is focused on shaping a “meaningful contribution” of its allies in the region.

He used the example of the way ahead with theater ASW.

“Our 12 new submarines will provide better deterrent capabilities for us but it should be seen as building a meaningful contribution for the US and our allies in the region.

“And by participating in a broader information-sharing framework, we can deploy our submarines to have an appropriate effect.

“In other words, we are focused on making meaningful, not a trophy, contribution to an alliance effort.”

Chief of Navy, Vice Admiral Tim Barrett will share the excitement of the New Generation Navy programme and the challenges of shaping a culture that is reflective of organisational and community values, and aligned to corporate strategy.

This is a story of renewal, profound change and the challenge of maintaining a ‘command’ structure while providing genuine motivating leadership and building a culture where individuals and groups can achieve their full potential so the Navy can achieve its Mission to Fight and Win at Sea.

Video is from the 2014 Human Synergistics Australian conference.