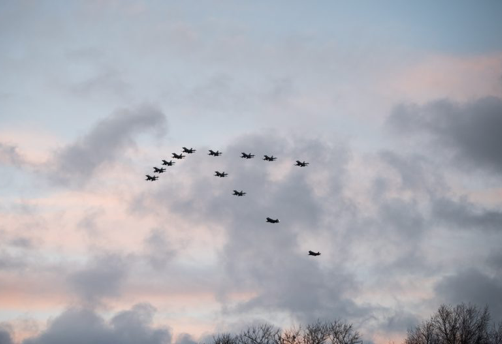 I have had the opportunity to visit F-35 bases since the standup of the first one at Eglin Air Force base.

And this year, I have visited Williamtown, RAF Marham, Ørland, and MCAS Yuma.

In each case, changes have been made to accommodate the coming of the F-35 but also, infrastructure has been or is being changed to shape a 21stcentury base appropriate to the transformation of 21stcentury air combat operations.

With the coming of the data rich aircraft, there are new requirements, needs and opportunities to manage data.  With the coming of a data generated maintenance system, new hangars are being built which can better facilitate the ability to work with data and to shape new maintenance approaches.

And security is a key requirement as well, but a work in progress.

At Williamtown and at Ørland, both the RAAF and the RNoAF are building F-35 centered airbases with legacy aircraft being moved out from the base.

At RAF Marham, the new facilities are being built as an enclave while the Tornados remain a key flying combat asset for the RAF and changes will be then be made at the base leveraging older facilities, such as hardened shelters, as the Tornados leave and the F-35s ramped up.

During my visit to Ørland, I had a chance to talk with Lt. Col. Eirik Guldvog, XO/COS 132 Airwing, at the end of April 2018, about the way ahead for the base.

The entire infrastructure for air operations in Norway is being restructured as the F-35 and the P-8 enter the force.

Ørland will be the main operating base for the F-35, with Bodø being closed and Evenes becoming the QRA base from which a squadron of F-35s could operate in a crisis as well.

The base is being built by the Armed Forces Estate Agency, and security is a key consideration. Workers have been brought from throughout Norway to work on the base.

According to Lt. Col. Eirik Guldvog: “The Armed Forces Estate Agency has built camps on the base to house workers to work on the base. Because of classifications, only Norwegian workers are being used.

When you fly into Ørland, one enters a small civilian terminal.  But that is the only aspect, which is civilian; the base is military and everything is run by the military on the base. Lt. Col. Eirik Guldvog underscored that  “The main objective is by 2022, to have the F-35s replace the F-16s and to provide the base line combat capability needed by the RNoAF.

“During the next three years, when Final Operational Capability is achieved, we will be utilizing the expanded capabilities of the aircraft.”

Because the introduction of the F-35 is not just about the aircraft, but the entire air system, the build out of basing and training is a key part of the standing up of the aircraft.

And indeed, it is recognized that doing so will be a work in progress for several years as well.

Force protection is a key part of building out the base, and, indeed, the center of excellence both for ground based air defence, force protection and mobile logistic support operates currently from the base.

And these skill sets will become even more important in the years ahead as well.

The transfer from Luke to Norway began with the arrival of the first three F-35s from Luke last November.

And in April, the first maintainers started their training at Ørland. The maintainers trained at Luke form the cadre of the initial Norwegian training capability.

And the ramp up of maintainers will be correlated with the arrival of the aircraft as well.

As Lt. Col. Eirik Guldvog added: “Each six months, we will receive three new aircraft and we will have trained the requisite personnel prior to those aircraft arriving in Norway.”

And because of the concentration of fighter aircraft at the base, flight activity will be closely monitored to control for noise and other impacts on the local community.

Lt. Col. Eirik Guldvog noted that “There will be about three times the amount of total flying over current conditions once the F-35 base is fully functional.  The Estate Agency is closely monitoring noise and flight patterns, to provide a base line from which future decisions can be made to deal with any challenges.”

Clearly, the standup of the F-35 is at the heart of the base modernization, but it is about shaping a 21stcentury combat base. It is about the ability to operate and sustain the combat operations of the aircraft; it is about the defense of the base, through ground based air defense and force protection, and it is about having the capability to support the overall Norwegian Air Force to be sustained where they operate and fight as well.

And working the synergy among these core interactive aspects will be at the heart of the development of the base in the years ahead.

Lt. Col. Eirik Guldvog highlighted that “The base will be evolving over the next several years as we operate the aircraft, and shape the infrastructure to work with the operations of the aircraft and the transformation of the RNoAF overall.”

Norwegian F-35s in Flight from SldInfo.com on Vimeo.

Two of the Norwegian F-35s based at Ørland Air base are seen flying near the base in December 2017.

This video was provided by the Norwegian Department of Defense.