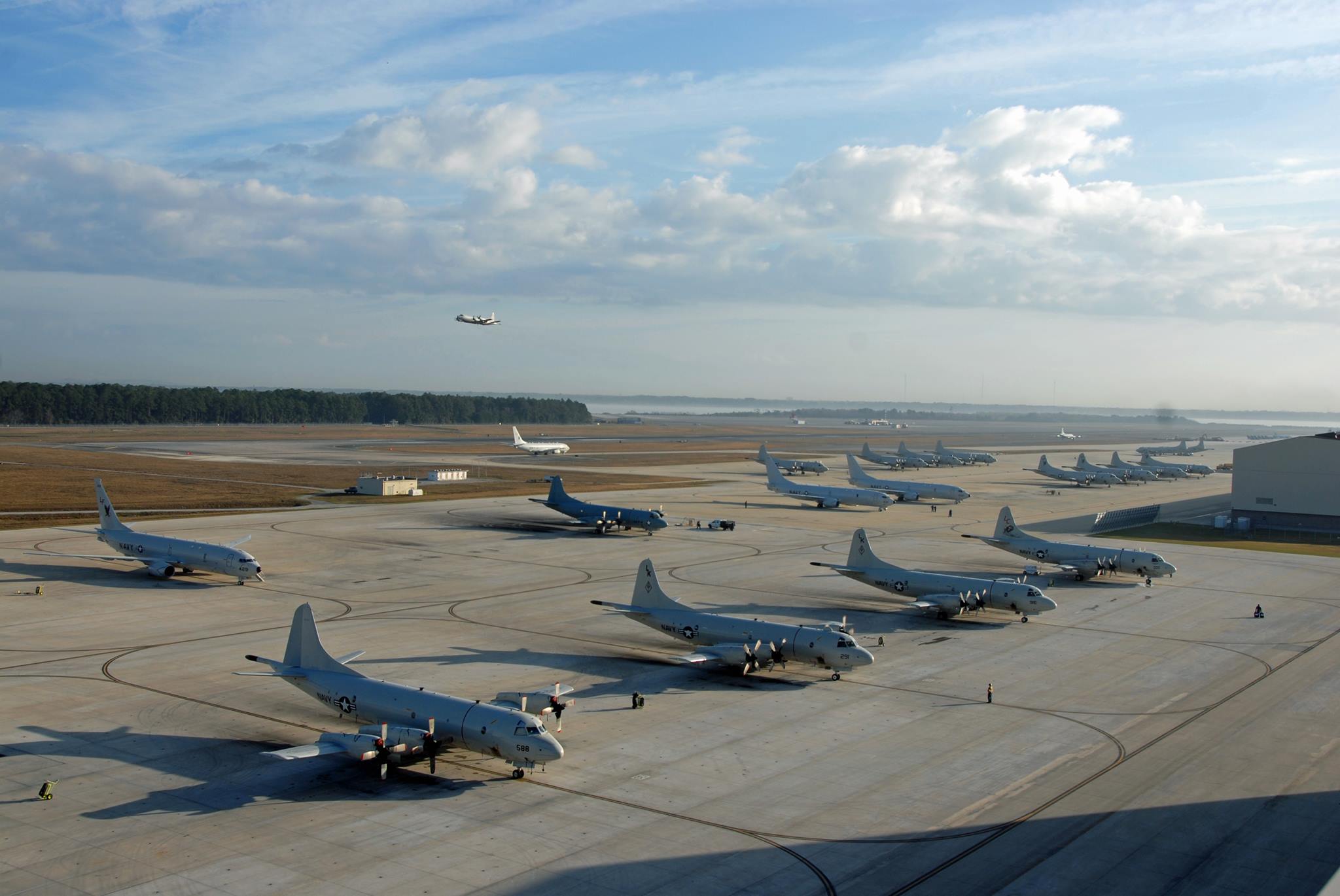 My recent visit to Jax navy provides a series of insights into the evolution over the past few years, as well as the nature of the foundation being laid for the next leap of capabilities within the fleet and the joint force.

For the P-8/Triton combination is clearly a key capability for the dynamic targeting which the USAF and the USN are focusing upon for deterrence in the new strategic environment.

In a number of the interviews conducted at Jax Navy and Mayport, I had a chance to discuss with P-8, Triton, Seahawk crews and with a MISR officer how the Navy is leveraging these capabilities to shape a kill web approach for the fleet.

I started my visit with a discussion with CDR Mike Kamas, Commanding Officer, Maritime Patrol and Reconnaissance Weapons School and his Executive Officer, CDR Matt Griffin, who will assume command of MPRWS on July 24, 2020.

Both of these Naval aviators have a wide range of operational experience and are clearly leveraging that experience in shaping a way ahead for the maritime patrol enterprise as a plank holder in a kill web enabled maritime force.

CDR Mike Kamas has 20 years of USN service in a variety of roles.  Starting out his career as a P-3 Naval Flight Officer at VP-16 in Jacksonville, he has also operated aboard aircraft carriers, served as a flag aide at the Undersea Warfighting Development Center in San Diego, and worked with the surface warfare community in Hawaii. He has operated forward in Europe and the Middle East, providing ISR to the joint force during the land wars of the past two decades. He also served as a Staff Officer at the United States Africa Command as well. In 2017, CDR Kamas came back to Jacksonville, made the P-3 to P-8 transition and assumed command of the Maritime Patrol and Reconnaissance Weapons School.

The P-8 is part of a wider sensor network which is interconnected through various C2 links and the platform shapes innovative new ways to do third party targeting, or essentially operated as part of interactive kill webs rather than like the P-3, which flew “alone and unafraid.”

His XO is CDR Matt Griffin who came from an ROTC background at Ohio State. He first deployed from Brunswick Maine as a Naval Flight Officer with VP-26, a P-3C squadron primarily supporting ASW. Midway through this tour, the focus of the squadron’s effort transitioned to support the land wars of OPERATIONS IRAQI AND ENDURING FREEDOM in support of the joint force. During his time in the Gulf, he became familiar with the challenge of operating in an area which is chock full of ships of varying sizes, purposes and capabilities, which of course, is a major challenge facing the US and allied maritime forces in the Pacific.

CDR Griffin noted that even while involved in the Middle East, the Navy made sure that his team’s ASW skill set did not atrophy too much.

For example, during one of his deployments, his team was sent to Japan for a period of time to work ASW even while their primary mission had shifted to overland ISR for the joint force.

He later went to the Undersea Warfighting Development Center in San Diego where new staff members received insight from very experienced commanders who did ASW in the Cold War period as well. “We were learning from retired Naval officers with hours and hours and hours of real-world operations against adversary submarines.”

After his time at the Undersea Warfighting Development Center, he went to serve on the staff of a Destroyer Squadron (DESRON). Here he worked on the challenge of translating the language and world of the MPA community into the language and world of the black shoe navy community. Obviously, this translation challenge becomes crucial to work given that with the third-party targeting capabilities being shaped by the networks and wave forms enabling interactive kill webs, empowering effective distributed strike and sensing collaboration is crucial.

CDR Griffin then went to NAWDC where he served for two years as the P-3 WTI program coordinator. This added the integration with the carrier air wing aspect to his training and education, in which the fast jet pilots also need to relearn their roles within a kill web concepts of operations whereby interactive networks both inform their targeting but also guide their roles in the kill web going forward. And with the sensor rich F-35 coming to the fleet, the role interactions among F-35, Triton, and P-8 is reshaping significantly how the fleet can operate a distributed integrateable force.

Next he transitioned to the P-8 and on his first deployment was intercepted by the Chinese Air Force in the South China Sea.

Both Commanders underscored that for the MPA community their home cycle readiness focus is geared toward dealing with peer competitors.

“We practice killing submarines and surface ships with a larger fight in mind.”

They both emphasized as well that the sensor networks are evolving and within that context the MPA community is learning new ways to shape interactive approaches within the fleet and in the joint community to manage ISR and strike capabilities.

A key aspect which often gets lost when addressing the competition with China is the importance of the combat experience of the joint force being taken forward to provide a combat advantage.

I asked them how they looked at how their combat experience from the land wars is leverageable going forward to the new strategic environment.

The answer: experience in adaptability and agility.

CDR Kamas noted that during his time in the Middle East, they would operate a significant amount of new roll on and roll off gear on their P-3s.

“The gear would be new to use, and we never trained for it during our home cycle. We learned on the fly. The level 500 instructors would shape a rapid learning course and we were able to fly a new technology in a very short period of time.

‘We flew missions in strange places the P-3 was never designed to operate in, and that kind of learning and the incorporation of new technology rapidly is a skill set we are taking forward toward current and future variants of the P-8 Poseidon and MQ-4 Triton.”

The P-3 ended up being a global aircraft.

The P-8 fleet is being built out as a global fleet, and there is a concerted effort to provide for greater information sharing and interoperability with P-8 partners, like the UK, Australia, New Zealand and Norway.

There is a clear effort to do better in this domain than was done with regard to P-3.

And that interoperability can yield a major advantage with regard to expanding the reach of interactive kill webs as well. The two leaders underscored that the P-8 is a key piece in the evolution of coordinated dynamic targeting.

“We are agnostic to who the shooter is. We think the P-8 has significant value in a kill web approach.”

They emphasized as well the importance of ongoing modernization of the sensor networks within which the P-8 is embedded, including key capabilities such as the sonobuoy sensors.

In contrast to 2016, now the Triton is part of the operating force, and the approach for P-8 is being modified to leverage this capability as well.

Here the opportunity being generated is for the Triton to provide for wide sweep ISR data, with the P-8 then being able to prioritize targets during its time on station.

And to get full value out of the P-8/Triton interactivity, the ability to correlate spiral software development on the two platforms is a key opportunity to evolve the overall ISR/strike enterprise.

“A lot of our focus during the WTI course is on challenges like third party targeting and execution of integrated strike tactics.

‘We deep dive the current way P-8s contribute to the kill web and give the class some ideas of how the platform’s software and sensor packages will evolve in the next 3 to 5 years.

‘This gives the students the opportunity to use their imagination on the role of the P-8A and MQ-4C Triton in a future fight.”

Third party targeting for the Navy means that the tac air community now is beginning to appreciate fully what a P-8/Triton dyad can bring to the party.

“They are clearly starting to see all of the goodness that the P-8 and Triton can provide.

“As a result, our staffs are talking at a significantly greater level than when you were here four years ago.”

The coming of MISR is clearly a major change as well in bridging the large wing aircraft and tac air communities as well, but I will focus on that in greater detail later.

But the software upgradeability piece which we discussed four years ago is clearly becoming a more significant part of the way ahead for the MPA community.

When we visited Jax Navy four years ago, all of the P-8s were baseline aircraft.

CDR Kamas noted that they are now able to feed operator input “back to the engineers and resource sponsors to inform the requirements process and software upgrades, in a way that integrates into the spiral software that comes out every two years and the D.C. budget cycle.

‘We keep a running list of software discrepancies that have been observed by the fleet and need to be corrected and we also prioritize new ideas for software features that can fill tactical capability gaps.”

CDR Kamas added that they host an annual conference where the fleet operators meet to formally deliberate on the list of desired changes.

“We have a contractor that helps us with the rack and stack prioritization process, transfers those suggestions to the program office, and engages with the resource sponsor to fund the top candidates on the list.”

This approach is laying down the foundations for further fundamental change within the procurement system and the way spiral software upgrades are managed as well. The speed brake is largely the information assurance piece.

“The whole process takes time, but it ensures we comply with DoD Information Assurance requirements.”

In short, 2013 was the beginning; 2016 laid a solid baseline aircraft to the fleet operational reset; and now we see the foundation being set for a build out of the integrated distributed fleet empowered by interactive kill webs.