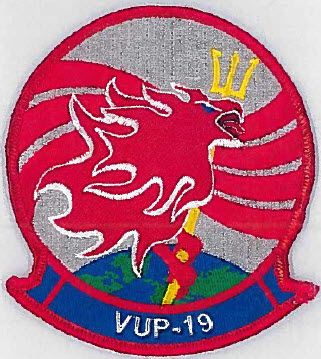 During my visit to Jax Navy the week of June 14, 2020, I got a number of updates on the progress and challenges facing integrating Triton into the fleet.

One of those updates was provided by VUP-19.

I met with Lt. Samantha (Thompson) Johnson who transitioned from serving as a P-3 pilot to becoming a Triton air vehicle operator and a weapons and tactics instructor at the Maritime Patrol and Reconnaissance Weapons School in Jacksonville.

I also met with LCDR Grant Coddington, the Intelligence Officer for the Squadron.

Rather than quoting either officer directly, I will indicate a number of takeaways I formed from the discussion and will not hold either officer responsible for any errors on my part in my learning process. The first takeaway, one which was reinforced by other discussions during the visit, was that the Triton operation much like the first few years of P-8 operation, is in its “wheels phase.” There is much to learn about the aircraft, its operations, and the data management challenges being posed by the aircraft as well.

The second takeaway is that the learning process has clarified key aspects of the operational cycle for a Triton orbit. Typically, the squadron operates with five members on a shift: two AVOS or air vehicle operators, two MPOs or Mission Payload Operators and one TACCO or Tactical Coordinator.

The third takeaway was that the personnel coming into Triton and “learning to Triton” come from the manned collection platform side of the house, P-3, P-8 or EP-3.

The fourth takeaway is that unlike Global Hawk, which has its own dedicated pipe to deliver data, the Triton is working through the Navy’s mission data collection systems. This creates challenges in terms of how to best handle the data and how best to ensure it gets delivered to the right place at the right time.

The fifth takeaway is that as software upgradeable aircraft, one paired with the P-8, the Triton is a work in progress. And with a clear focus on informing dynamic targeting, the Triton community is clearly looking forward to coming of the next major upgrade to the mission payload on the aircraft, namely, a multi-INT capability.

The sixth takeaway is that there is clearly a cultural learning process as well. The MPA community has operated throughout its history based on a concept of operations driven by air sortie operations. The Triton is based on a multi-airplane orbit concept of operations which yields a very different data stream than one gets from an air sortied aircraft. And it is one which is layered between what the space systems deliver and what the sortied air collection platforms can deliver.

The ninth takeaway is that the Triton community is starting to build some experiential depth, the kind of depth crucial for the knowledge revolution which the Triton can bring to the fleet. And given that the Triton is engaged in tasking, collecting, processing, exploitation and dissemination of information in real time, learning how to do this for the fleet is a crucial challenge facing the future of a kill web enabled force.

And looking forward, as the Triton gains multi-INT capabilities, it will become a more effective platform to contribute to the collaborative effort where multiple sensors can be cross-referenced to provide greater fidelity on targeting, and notably when it comes to smaller vessels of interest as well.