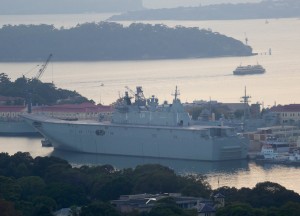 The Aussies have developed a new amphibious capability and are evolving their operational appraoch as they have been deploying the ship and working with allies, notably with the USN-USMC ampbiious team.

In a story published March 25, 2016, I looked at the projected way ahead which the Aussies have certainly fulfilled and are moving full speed ahead.

2016-03-25 The Aussies have added two new amphibious ships to the Australian Defence Force (ADF) and sorting out the way ahead is at the vortex of land, sea and airpower, and the ADF is addressing it in this manner.

It is a work in progress but the first new Canberra class ship is already in support of the operation in Fiji in disaster relief.

As one senior ADF officer noted in an interview last week, “We are trying new capabilities off of the ship as we do the relief effort. In many ways, this initial operation is really an operational testing activity.”

HMAS Canberra Deploys to Fiji from SldInfo.com on Vimeo.

The second Canberra-class ship, the HMAS Adelaide is home ported in Garden Island, in Sydney Harbor.

And below is a picture of the new amphibious ship as seen on March 25, 2016 in Sydney Harbor.

Fleet Divisions were held on the flight deck of HMAS Adelaide, alongside Garden Island, Sydney on 24 March 2016.

According to the Australian Ministry of Defence:

The Royal Australian Navy band and a guard marched onto the flightdeck, while over 1,000 personnel from HMA Ships Kuttabul, Adelaide, Success, Melbourne, Warramunga and Newcastle formed into platoons which were inspected by the Governor-General, His Excellency General the Honourable Sir Peter Cosgrove, AK, MC (Retd), and Commander Australian Fleet, Rear Admiral Stuart Mayer, CSC and Bar, RAN.

HMAS Adelaide (L01) is the second of two Canberra-class landing helicopter dock (LHD) ships under construction for the Royal Australian Navy (RAN). Construction of the ship started at Navantia’s Spanish shipyard with steel-cutting in February 2010.

Delivery to Australia for fitting out at BAE Systems Australia’s facilities in Victoria was scheduled for 2013, but did not occur until early 2014. Despite construction delays and predictions that the ship would not be in service until 2016, fitting out progressed faster than expected, and the ship was commissioned in December 2015. Garden Island is an inner-city locality of Sydney, Australia and the location of a major Royal Australian Navy (RAN) base.

It is located to the north-east of the Sydney central business district and juts out into Port Jackson, immediately to the north of the suburb of Potts Point. Used for government and naval purposes since the earliest days of the colony of Sydney it was originally a completely detached island. It was joined to the Potts Point shoreline by major land reclamation work during World War II.

Garden Island today forms a major part of the RAN’s Fleet Base East.

It includes active dockyards (including the Captain Cook Graving Dock), naval wharves and a naval heritage and museum precinct. Approximately half of the major fleet units of the RAN use the wharves as their home port.

Along with the new, the older capability can be seen in Sydney Harbor.

For example, L-50, the HMAS Tobruk, which has been decommissioned can be seen in the harbor.

HMAS Tobruk (L 50) was a Landing Ship Heavy (LSH) of the Royal Australian Navy (RAN), based on the design of the Round Table-class of the British Royal Fleet Auxiliary. Planning for the ship began in the 1970s to provide the Australian Army with a permanent sealift capability.

She was laid down byCarrington Slipways in 1979, launched in 1980, and commissioned in 1981. She was a multi-purpose,roll-on/roll-off heavy lift ship capable of transporting soldiers, APCs, and tanks, and delivering them to shore via landing craft or directly by beaching.

The ship experienced problems during her early career with her engines (which differed from the British base design) and sewerage system (leading to the death of a cadet in 1981). During the 1980s, the ship delivered supplies to the Multinational Force and Observers on the Sinai Peninsula, assisted in the withdrawal from RAAF Base Butterworth, provided support and accommodation for delegates to the South Pacific Forum, and was part of the Australian response to the 1987 Fijian coups d’état.

In the early 1990s, Tobruk was part of ceremonies marking the 75th anniversary of the landing at Anzac Cove, then after a refit, participated in peacekeeping efforts in Somalia.

Plans to replace Tobruk with one of the Kanimbla-class ships began in 1993. She was offered for sale to the Royal New Zealand Navy, who refused because of the ship’s manpower requirements. Delays in converting the Kanimbla‘s for service meant Tobruk continued with normal operations during the 1990s.

Attempts to sell the ship to the British and the Portuguese did not succeed, and in 1997 the decision was made to keep Tobruk, as the Kanimbla‘s could not completely replace the heavy lift capability provided.

In 2000 and 2001, Tobruk was sent to the Solomon Islands on several deployments in response to thecivil war: first to evacuate Australian citizens, then as a neutral venue for peace talks. From late 2001 to early 2002, the ship was in northern Australian waters on border-protection duties as part of Operation Relex.

During 2005 and early 2006, Tobruk sailed to the Middle East on several occasions to deliver vehicles and cargo to Australian forces in the region. Tobruk and the two Kanimbla‘s were set to East Timor in mid-2006 in response to the 2006 East Timorese crisis, forming the first RAN amphibious readiness group since World War II.

The rest of the decade included further border protection deployments under Operation Resolute, a visit to Hawaii for the RIMPAC multinational naval exercise, support for the Army Aboriginal Community Assistance Program, relief operations following the 2009 Samoa earthquake and tsunami, and use as the venue for a Fall Out Boy concert.

After spending several months in 2010 undergoing extended maintenance, Tobruk participated in the United States Navy’s Pacific Partnership humanitarian assistance deployment. Because of the need for propeller shaft repairs, Tobruk could not be part of the military response to Cyclone Yasi.

Heavy use and lack of maintenance in previous years began to take its toll, with Tobruk unavailable for service on several occasions during the early 2010s. As the two Kanimbla‘s had been forced out of service by ongoing issues, the Australian government had to charter a succession of civilian ships to provide standby heavy transport capability.

In 2013, Tobruk again participated in Pacific Partnership, followed by a visit to the Philippines with disaster relief supplies after Typhoon Haiyan. In early 2015, the ship was part of the response to Cyclone Pam’s impact on Vanuatu. Tobruk was decommissioned in July 2015, with calls for the ship to be scuttled as a dive wreck.

But the shift from the old to the new is more than building new hulls.

It is about very different concepts of operations, whereby amphibious ships are moving beyond simply being transport assets bringing support or forces ashore for various humanitarian or defense capabilities.

It is now about becoming a key part of evolving 21st century integrated combat capabilities.

To get there will be a challenge for the Aussies, but clearly they are working the problem.