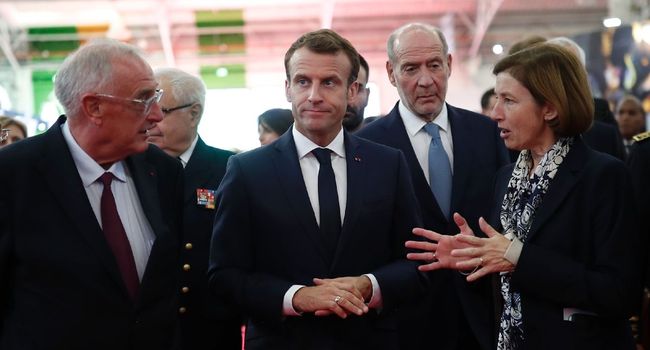 Two years during which the maritime world have become increasingly multipolar.

Just in the submarine business, more than forty countries are nowadays involved. In the meantime Russia has been adding to its fleet 28 new ships in 2018 alone, while China, with a production rate of one frigate and one submarine a month, is supposed to supplant the United States as the very first naval giant in the world by the end of this year.

“China soon should have 6 aircraft carriers, the first being in service, the second being tested and the third under construction, while the number of corvettes jumped from 16 in 2012 to 56 today and the number of destroyers from 18 to 29″, stresses Alexandre Sheldon-Duplaix, Senior research fellow at the Paris War College.

These are a few of the facts that were laid out at the outset of last week’s Euronaval 2018 exhibit in its inaugural conference, which prompted several European naval commanders to present what could be described as a wakeup call military strategy in the maritime domain.

Both France and the United Kingdom were major naval powers till the end of the Cold War, respectively in 3rdand 4thpositions after the USA and the USSR in 1990: they still are among the top ones, but have retrograded to 5thand 6thposition with China and Japan now right in between.

The United Kingdom has therefore embarked on a « quantum leap» modernization program centered around the Queen Elisabeth, which Commodore Steve Allen, Royal Navy Assistant Chief of staff Carrier Strike and Aviation, described as “built with flexibility and redundancy in mind” and a path to step back in the game : “65,000 tons of diplomacy” marking the resurgence of big decks and the redefinition of what multi-mission is all about  thanks to the F35 capable to deliver air-to-air, air-to-surface or electronic attack capability in order to “exploit the battlespace to the maximum advantage,” he says.

Adopting Theodore Roosevelt’s famous motto – “Speak softly and carry a big stick”, Commodore Allen indeed did speak softly but laid out a pretty impressive picture of where the Royal Navy is at with a full renewal of its capabilities to become “a national tool by 2020.”

For the French Navy, the horizon of the modernization program currently under way under the name Mercator Plan is a bit further away and set at 2030.

It involves in particular grasping what Hervé Guillou, CEO of Naval Group, refers to as the “Tsunami of the digital sea,” as well as being able to “see beyond the optical and radar line of sight” by developing – among other new assets – tailored drones and big data capabilities.

According to Mercator, the French Navy will for instance welcome the first demonstrator for the SDAM (or “système de drone aérien pour la Marine,”which was presented during Euronaval)  by 2021, i.e. the VSR700 currently being developed by Airbus Helicopter and Naval Group, with an IOC planned for 2028.

Black Hornet micro unmanned aerial vehicles, as well as Medium Altitude, Medium Endurance (MAME) UAVs, will however support  the missions of French Seals (“fusiliers marins”) as early as next year.

As Vice Admiral Denis Béraud, Deputy Chief of the French Navy, stressed during Euronaval 2018 inaugurating conference, there has been in recent years an increasing sense of danger in various parts of the world, where sailing through “used to be a simple formality”: whether in the strait of Bab el Mandel or in the strait of Hormuz, attacks and the threats of drones, mines or missiles have grown exponentially and French sailors need to experience “the smell of gunpowder” by training more often with real ammunition.

The ultimate goal is indeed to increase the resilience of the German Navy towards a “360 degree readiness.”

For the most part an Alliance Navy dedicated to the defense of NATO’s Northern flank, the German Navy is today crossing the winds of change as well, as a noticeable evolution of doctrine seems under way from crisis management (with a constant participation for example to the Atalante Operation since 2008 and Sofia since 2015) towards more focus on homeland security.

As for the UK and France, a surge in naval procurement has been occurring, while Germany is developing multiple partnerships: in the submarine field with Norway; with the exchange of cadets and a new Maritime Patrol Aircraft project with France; with the renewal of traditional links with the Netherlands.

Quoting Konrad Adenauer, the German Navy Vice Admiral stressed however that “we all live under the same sky, but we don’t have the same horizon.”

A statement especially true as far as European naval cooperation is concerned causing sorrow for many naval decision-makers.

This year however, Euronaval – which was celebrating its fiftieth anniversary – was more than ever the theater for more cooperation to come as stressed by French Chief of staff of the Navy, Admiral Christophe Prazuck: this year’s 26thedition has hence been an “opportunity for the chiefs of staff of 16 Navies belonging to the riparian states of the gulf of Guinea as well as 3 European Navies to meet and discuss the development of joint cooperation in the field of maritime security and training,” he confides in an interview published in the October 23rdEuronaval Daily.

Several announcements about new cooperation agreements were as usual made during that week, the most advertised being the Franco-Italian Naval Group – Fincantieri 50-50 joint venture.

For the United States, Euronaval was an opportunity to reinforce a long standing relationship with France on maritime security, as demonstrated by the fact that an E-2D Advanced Hawkeye was flown especially from the USCENTCOM area of responsibility for the occasion.

France is so far the only Hawkeye operator with the United States to deploy the latter from an aircraft carrier. With 3 E-2C versions procured at first in 1998 and currently being retrofitted, the next French program law should include the procurement of 3 new « Deltas » to be delivered by 2026-2028.

Such a planning matches the confirmation which was officially made by the French minister of the armed forces that the study phase of the successor of the Charles de Gaulle is under way to be contracted.  The United States and France have already initiated preliminary talks about equipping the future “PA NG” (“porte-avions de nouvelle generation”) with an Electromagnetic Aircraft launch System or EMALS.

Last but not least, for the first time in the history of Euronaval, the French President also “stepped in the game” by paying a visit at Le Bourget to stress once again the importance of innovation while first visiting “SEAnnovation,” a new space dedicated to 34 start ups of various nationalities.

A definite sense of renewal could be felt at Euronaval 2018.

The featured photo shows President Macron with the French defense minister during his visit to Euronaval on October 23, 2018. The picture is credited to AFP.

This article was first published by our partner Breaking Defense on November 15, 2018.

This is an expanded version,