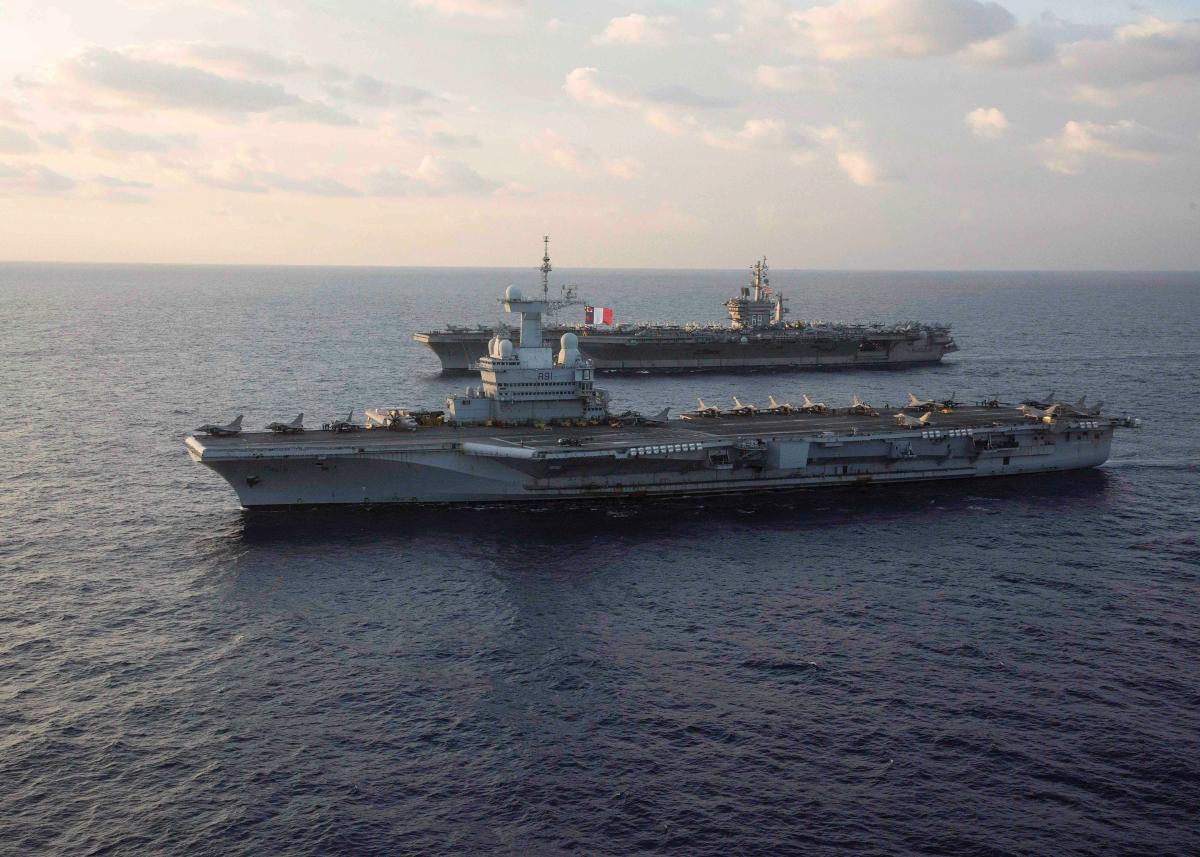 We provide an excerpt here and a link to the full article at the conclusion of the excerpt.

During its midlife overhaul, the Charles de Gaulle received major upgrades, which were identified during its many deployments, including the capability to operate farther away, more efficiently, and more forcefully. These capability upgrades, along with changes to the strike group, will enable it to meet the naval and military challenges of the next two decades.

The 2016 retirement of the Navy’s Dassault-Breguet Super Étendard fighters has meant the ship’s configuration required modification to accommodate the all-Rafale air wing. As the ship returns to the fleet, it now can embark up to 30 multirole jets with a substantially increased flight range compared to the former aircraft, and can deploy a wide range of airborne weapon systems.

Changes to the hangar spaces, weapon storage, and telecommunication systems will enable the ship to take the best advantage of the Dassault Rafale’s capabilities. Transitioning the aircraft to the future F3R standard will make it possible to arm the Rafale with the TALIOS pod (a long-range optronic targeting system) and the long-range air-to-air Meteor missile. The CSG’s power-projection capabilities will be enhanced, thanks to new Missile de Croisière Naval (MdCN) cruise missiles on board FREMM multimission frigates and Barracuda-class nuclear-powered submarines. These two new platforms will define the format of the future French Navy and its crews, strengthening our ability to defend our interests in the quiet, dark, and contested undersea world. The Atlantique 2 maritime patrol aircraft (Standard 6) will put France at the top of the leaderboard in the tactical and technological complexity of antisubmarine warfare, as the number and performance of submarines rapidly grow.

Our mine-warfare capabilities will be tailored to new threats. Technological progress will make possible development of new mine countermeasure platforms such as submersible and surface drones, as well as incorporation of new artificial intelligence–based concepts.

Beyond these key capabilities, in a less visible but nonetheless essential manner, we have undertaken other significant upgrades over the past decade. The upgrade to the Charles de Gaulle included a new radar, combat system, and very-high-speed network infrastructure to increase the flow of information as well as reinforce cyberdefense. The ship’s airborne early warning E-2 Hawkeyes are being upgraded as well, with plans to purchase the E-2D model in the next few years.

The Navy has commissioned Horizon-class and multirole FREMM frigates, both with improved air-defense systems. The intermediate-size Frégate de Défense et d’Intervention (FDI) in development will have a very promising watch system and significant data-processing capability. Our networks will need the ability to detect threats farther away and earlier to act offensively and defensively.

A range of new threats is emerging—hypersonic anti-ship missiles, supercavitation torpedoes, armed drones, and cyberattacks—requiring the CSG to operate at the highest level of self-defense vigilance. The vertically launched Aster missile family will become the new self-protection standard with the decommissioning of frigates equipped with Crotale EDIR and SM-1 missiles. But force-protection is conceived systematically, not ship-by-ship, and the Rafale fighters also will contribute to the defense of the CSG.

Finally, the CSG’s strategic mobility could not be ensured without adding a credible logistical support capability—the Flotte Logistique (FlotLog) program will deliver the first new replenishment ships by about 2025.

The Nuclear Naval Aviation Force (FANu)—built around the Charles de Gaulle and Air-Sol Moyenne Portée (ASMPA) nuclear-cruise-missile-equipped Rafale fighters—relies on all the CSG’s assets. It will be strengthened by upgrades to each component, as well as the ASMPA’s probable successor, the Air-Sol Nucléaire de 4e Génération (ASN4G).

But equipment, no matter how efficient or sophisticated, is not sufficient to make a military capability. During the Charles de Gaulle’s two-year operational hiatus, a major doctrinal revision was conducted, as well as significant training for the sailors affected by the upgrades. Our personnel are the real source of our tactical strength.