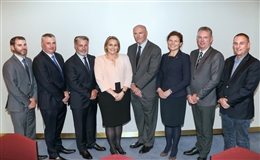 In the competition between the liberal democracies and the rising tide of 21st century authoritarians, the challenge for our militaries and our civilian leaders is how to manage and prevail in full spectrum crisis management?

But increasingly, this challenge is not confined to traditional military forces, but encompasses key elements of a globalized economy, in which the 21st century authoritarians, who are a key part of the capitalist generated globalization process, are in a position to use disruptions and sector controls to their advantage.

My colleague John Blackburn has been focusing with his team on the need to re-frame Australian defense strategy to encompass the question of recovering sufficient Australian sovereignty over infrastructure so as to be able to protect and manage its interests.

Defense is not simply about what the professional military do; it is increasingly about enhancing national resilience by national and coordinated actions with trusted partners.

Recently Blackburn was asked to address the maritime trade aspect of the broader infrastructure side of security. In his presentation, he underscored that offshoring efforts of Australia, to which the government has reduced its role to trying to regulate the offshore migration, but little else, leaves Australia extremely vulnerable to disruptions generated from the global market. But one must also realize that this is a market in which authoritarian states play a key role.

And it must be remembered, that the participation of the firms of the authoritarian states are not simply responding to so-called market pressures but have state interests as a driver in their behavior as well.

During the recent Australian Chief of Navy’s Seapower Conference held in Sydney, I attended the panel on which Blackburn presented his examination of the challenges and responses to those challenges posed by maritime trade and security.

Many of the key elements of his argument presented at the panel dealing with this topic are highlighted in his interview done at the end of the conference with John Conway of Australian Defence Business Review, and can be seen in the video below:

But after the maritime trade and security panel, I was able to sit down with Teresa Lloyd, the CEO of the Maritime Industry Australia, and to discuss how the Association was seeking to deal with the challenge highlighted by John Blackburn.

Maritime Industry Australia Ltd (MIAL) is an industry and employer association that reflects our members’ requirements domestically and internationally. We represent the collective interests of maritime businesses, primarily those operating maritime assets or facilities from Australia.

In our discussion,  Lloyd emphasized how far offshoring has gone with Australia today having only 14 Australian flagged ships of any size.  Offshoring has led to a situation where the question of Australian sovereignty is not a focus of national policy whereby offshore platforms, companies and systems deliver trade outcomes to Australia, but with very little consideration for the kinds of concerns which Blackburn and his team have raised.

Lloyd underscored in the past year, MIAL has been focusing on the question of what critical maritime skill sets Australia needs to remain in control of its maritime enterprise.

“Australia has chosen not to build and operate its own maritime ships. That decision has been taken. But we can’t very well not have the critical skill sets within the nation to operate the maritime enterprise. And with the decline in these critical skill sets across OECD nations; Australia is in a stiff competition to ensure that it indeed has these skill sets.”

In a recent submission to the Australian Parliament, the association highlighted a number of key tasks which it views as crucial to the viability of Australia’s maritime sovereignty.

“Australia needs a maritime and shipping policy that focuses on encouraging a shipping industry in its own right – to deliver the economic multiplier effects that are universally cherished by maritime nations and the maritime skills development so many nations need.

“As the world’s largest island nation, Australia requires maritime skills more so than most other countries. From the requirement to ensure trade is facilitated via Australian ports without incident, to ensuring we meet our international responsibility as a country with one of the largest port state control asks, the use, retention and development of maritime expertise is vitally important.”

The association went on to recommend that Australia build “a strategic fleet (to) provide adequate training and work opportunities to secure the skills base now; provide stability for key supply chains; and offer strategic support to the nation should they ever be called upon.

“The coastal trading task presents challenges for Australia. It offers an opportunity for assets to be deployed in meeting the critical needs of the country, but inadequate incentive for Australian ship operators to engage broadly in the face of direct competition from foreign operators and a client base (cargo interests) that demand the cheapest possible costs.”

As John Blackburn put it in his presentation: “What looks to economist as the lowest cost may well not be so from the standpoint of the position of national resilience.”

The submission to Parliament goes on to argue: “All nations with an indigenous shipping capability either protect, subsidise or incentivize the sector. Australia must do likewise if any or all f these avenues to create a pool of assets (AISR, Strategic Fleet, Coastal Trading Fleet) are to be successful in creating a competitive Australian based offering.”

In my latest interview with one of the MIAL’s board members, former Chief of Navy Vice Admiral Tim Barret, the core importance of broadening an understanding of the capabilities needed by the Australian nation to defend its interests in the maritime domain.

As he noted in that interview: “When you  expand the lens of what sustainability is for the Australian nation.

“It is about safe and secure maritime trade as well underwritten in part by our seapower and those of our allies.

“It is a national endeavor, not just a purely commercial and legal effort by industry and the workforce in the civil maritime sector.

“In other words, the Conference provided an opportunity to broaden the discussion about the role of seapower to focus on building a new fleet, how to sustain it, and integral to that, how we can provide as a nation a more secure maritime environment for our society’s needs.

“In effect, we were able to focus on the broader maritime endeavor, rather than just the recapitalization of the combat fleet.

“And we need a broader understanding of the need for greater resilience in our industry and to be able to shape a more secure society.

“Norway is an example of note.  They have leveraged their energy resources as a way to build out their society. And having had that experience as a nation, they now are committed to defending their way of life against dangers posed by their near neighbors.

“It is about total defence for the Norwegians which they understand is a whole of society challenge, not a job simply outsourced to the professional military.

“To some degree, that has to happen in Australia.

“The shipbuilding plan is one small element, but it can provide a catalyst to try and drive national consciousness to embrace the wider concept of defence and security.

The featured image shows the current MIAL Board