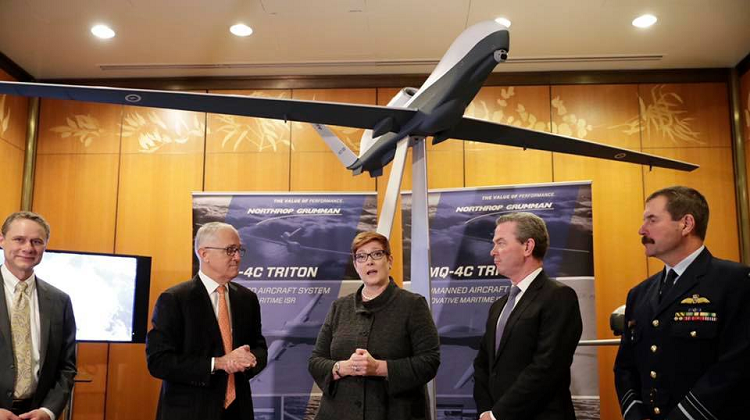 The security of Australia’s maritime borders will be significantly strengthened with another major military investment.

The Turnbull Government will invest $1.4 billion and acquire the first of six MQ-4C Triton remotely piloted aircraft through a cooperative program with the United States Navy.

The Triton will complement the surveillance role of the P-8A Poseidon aircraft through sustained operations at long ranges as well as being able to undertake a range of intelligence, surveillance and reconnaissance tasks.

Together these aircraft will significantly enhance Australian anti-submarine warfare and maritime strike capability, as well aster search and rescue capability.

According to a statement by the Australian Department of Defence dated June 26, 2018:

“This investment will protect our borders and make our region more secure. As part of this investment Australia will also enter into a $200 million cooperative program with the United States Navy for the development, production and sustainment of the MQ-4C Triton. Australia’s alliance with the US is our most important defence relationship, underpinned by strong cooperation in defence industry and capability development.

“This cooperative program will strengthen our ability to to develop advanced capability and conduct joint military operations. As part of the initial $1.4 billion investment in the Triton system, the Government will invest $364 million on new facilities at RAAF Base Edinburgh and RAAF Base Tindal, as well the necessary ground control systems, support and training required to implement a project of this nature.

“The project is expected to create about 70 jobs across South Australia and the Northern Territory. Northrop Grumman as supplier of the Triton will play a lead role in delivering the capability in Australia.

“The Orion fleet has performed exceptionally on operations throughout its distinguished service, and the last of these aircraft will be over 40 years old when they are withdrawn from service in 2023.”

In an article published with our partner Australian Defence Business Review on June 26, 2018. Andrew McLaughlin focused on the Triton acquistion.

The long-running project AIR 7000 Phase 1B requirement for an MUAS capability was reportedly approved by the National Security Committee (NSC) of Cabinet on June 19, and came just two weeks after the US Navy’s first two Tritons entered service at NAS Point Mugu in California and are preparing to commence an early operational capability (EOC) from Guam later this year.

The initial $1.4 billion program cost will cover the first of the six planned aircraft, and will include $364 million for the construction of new operational and support facilities at RAAF bases Edinburgh near Adelaide and Tindal in the Northern Territory, and an initial ground support equipment, training and spares package.

It also includes a $200 million investment in the US Navy-led Triton co-operative development program which will give Australia a seat at the table for future capability enhancements for the Triton, including the ‘Multi-INT’ signals intelligence package.

Australia has long-held an interest in acquiring an MUAS to work in conjunction with the Boeing P-8A Poseidon, 12 of a projected 15 which have been ordered under Project AIR 7000 Phase 2.

The 1987 White Paper stated a requirement for a “manifest capability” to conduct surveillance of Australia’s vast sea and air approaches, a capability which must provide the means to detect, identify and if necessary respond to sea and air activity in our sovereign air and sea space.

As technology improved, the 1994 White Paper noted that a promising area of investigation is the use of unmanned aerial vehicles for surveillance of land and maritime environments. That ISR capability finally seemed within reach when Global Hawk was developed by Ryan Aeronautical, now part of Northrop Grumman, to meet a US Air Force requirement for broad area overland surveillance to initially complement and eventually replace the manned Lockheed U-2.

The first of more than 40 Global Hawks flew in February 1998, and a number of early Advanced Concept Technology Demonstration (ACTD) systems were pressed into operational service in 2001 immediately following the 9/11 attacks on the US.

Global Hawk’s ability to fly intercontinental distances was amply demonstrated in April 2001 when an ACTD – temporarily dubbed Southern Cross II to honour the first Pacific crossing in 1928 – flew non-stop from Edwards AFB in California to RAAF Edinburgh, covering the 13,219 kilometres in 22-hours. That was the first pilotless aircraft to cross the Pacific, and a world record for absolute distance flown by a UAV.

In July 2006 the Howard government gave First Pass approval for participation in the cooperative development of a maritime Global Hawk with the US Navy, and in 2008, a ‘navalised’ Global Hawk won the US Navy Broad Area Maritime Surveillance (BAMS) requirement.

The Triton differs from the RQ-4B Global Hawk by having a stiffer wing, leading edge and engine intake de-icing, lightning and bird-strike protection, and the AN/ZPY-3 Multi-Function Active Sensor (MFAS). Later enhancements will see a combined air-to-air sense-and-avoid/weather radar sensor added for operations in controlled airspace, and the Multi-INT sensor package. The Rudd government’s 2009 Defence White Paper made the key commitments towards achieving a mixed fleet of manned and unmanned maritime patrol aircraft – eight manned aircraft and up to seven large, high altitude, long endurance (HALE) UAVs. But later that same year the government reversed course and instead deferred its involvement in BAMS, citing financial and manning pressures on the RAAF as it transitioned from the AP-3C to the P-8A.

The government confirmed its interest in acquiring the Triton by announcing in May 2013 that it had issued a Letter of Request (LOR) seeking further information from the US. A ministerial statement said the LOR would give Australia access to detailed information on the US Navy’s Triton, but emphasised that the release of an LOR had not yet committed Australia to purchasing the system.

In early 2014 the then new Abbott government gave the First Pass approval to acquire Triton, but the long-term schedule for the program remained somewhat ambiguous. Meanwhile, the 2013 Defence White Paper had committed to eight Boeing P-8A Poseidons, the first of which arrived in November 2016.

The most recent Defence White Paper published in early 2016 upped the number of P-8As from eight to 12 plus three more options. The 2016 document also confirmed the acquisition of seven MQ-4C Tritons.

Triton can fly at altitudes above 50,000 feet and has an endurance of more than 24 hours. From RAAF Tindal, a single Triton mission can cover well up into the South China Sea or all of the resource-rich Northwest Shelf area out to the Cocos Islands and beyond. From RAAF Edinburgh, a Triton can reach and cover most of Australia’s Antarctic coastal are of interest in a single mission.

Follow-on announcements for the contract and production of the remaining five systems, and the preferred in-service sustainment provider are expected to follow by mid-2019.

The first RAAF system is scheduled to be delivered in mid-2023, initial operating capability (IOC) is planned to follow 12 months later, and a fully operational capability (FOC) of all six systems is scheduled for mid-2025.

Max Blenkin contributed to this article.

For an article focused on our visit to RAAF Edinbourgh where the Australians are building a base from which to operate both the P-8 and the Tritons, see the following: