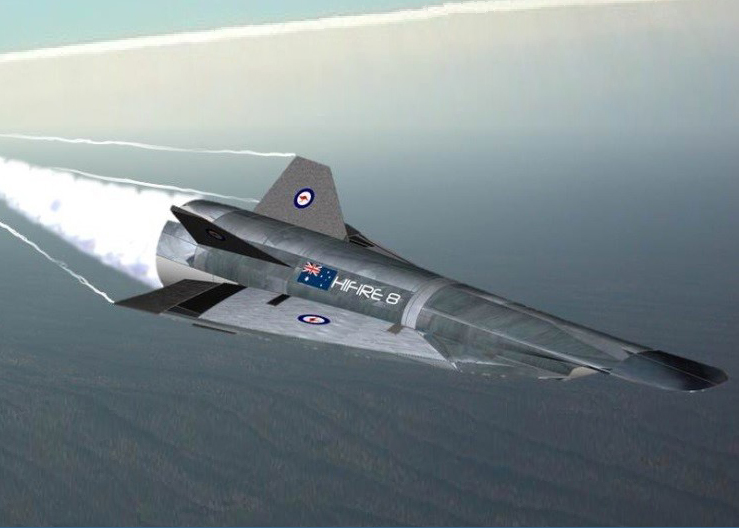 Like the United States, the Australians have built a foundation for progress in hypersonics but that effort needs to be re-energized and expanded.

The US under the leadership of Dr, Mark Lewis partnered with Australia in this research area and that effort certainly needs to be re-energized as well.

During a visit to Australia in 2014, I had a chance to visit with a leading hypersonic scientist and to discuss their program.

The coming of the USMC for a 6-month rotation in the training areas of Northern Australia is a concrete manifestation of the US-Australian deepening their working relationship in shaping 21st century Pacific Defense capabilities.  The Aussies are engaged in significant defense modernization projects, such as the KC-30A Airbus tanker, the Wedgetail Air Battle Managements System and the F-35.

Along with these projects, the Aussies are engaged in significant research in the field of hypersonics and have partnered with the U.S. on some of the basic research, but going forward the US should consider extending the excellent working relationship with Australia in the hypersonics area.

Too often, there tends to be an attitude in Washington of fiscal limits overcoming modernization.

Yet when one looks at the Pacific, key allies are investing in defense modernization and in significant innovations as well.

The opportunity is to shape convergent modernization to the benefit of the allies and the U.S. to deal with the challenges from China and North Korea.

It is not us versus the Chinese; it is the allied engagement shaping deterrence in depth against a China with no strategic allies, other than Russia and North Korea.

Recent Chinese tests on hypersonics have underscored that several countries are working to be able to build operational hypersonics platforms, for a variety of purposes.  You wouldn’t want to be second to the table with a hypersonic strike missile.

Partnering with a solid ally like Australia can help ensure that does not happen to the United States.  But this requires significant commitment to steady investment in the hypersonics research area.

Australia has a small but cutting edge team of hypersonic researchers, with the test ranges to play out the evolving technologies, and with significant global working relationships. Research in this field can clearly yield possible capabilities for space access as well, with an ability to launch rapidly ISR and C2 capabilities for Australia and as part of the effort to overcome the tyranny of distance to deal with longer-range threats and challenges as well.

In fact, hypersonic “air-breathing” engines may be the only solution for dramatic reductions in the cost of launching payloads to orbit.

During a recent visit to Australia, I had a chance to visit several defense installations, including a hypersonics research area.  I visited with Dr. Allan Paull and members of the Defence Science and Technology Organization (DSTO) hypersonic team located close to Brisbane, Australia.

Dr. Paull made it clear that the team was small but effective.

We combine the skills of several disciplines but each member of the team takes ownership of the entire effort and provides inputs to each and every aspect of the enterprise.

We are not organized around a model of deep pocket experts who stay within the confines of their specialty; we interact across the enterprise to push the research effort forward.

Visiting the workroom of the DSTO where two hypersonic vehicles are being assembled certainly reinforced the point that several moving parts are being worked toward the next hypersonic test.

The key takeaway from the discussion with Dr. Paull was rather straightforward:

By 2015 we will have finished our current round of tests, and by that time there is little question but that the basic scramjet technology works and can be leveraged moving forward.

A key hypersonics program is the HIFiRE program. Australia has worked with the USAF in building out a full set of HIFiRE test vehicles. The objectives of the program are twofold: To develop the science and technology for hypersonic flight with air breathing propulsion; Complete a horizontal flight of a scramjet-powered vehicle for a duration of 30 seconds.

An interesting aspect of the Aussie effort has been to build an engine which can reach hypersonic speeds but fit into the center of a vehicle, thus allowing for an axisymmetric configuration. The team is working a number of innovations to achieve this result.

Such an engine, if proven, would be a major step forward in making practical use of scramjet technology.

If this capability works effectively and can be replicated from a manufacturing point of view, then the path towards achieving hypersonic missiles seems open. Additionally, HIFiRE is testing high angle of attack flight profiles as well which adds a potential of maneuverability to speed.

Much has been achieved by Australia already, working in concert with its partners in hypersonic research in a period of less than a decade.  But the importance of this effort, and the need to be on the cutting edge is clear.

The basic hypersonics research effort is being worked for a baseline space system as well.

This program is called SCRAMSPACE which is the first and largest project funded by the Australian Space Research Program.  The program is working on a Mach 8 flight experiment.  This experiment entails both ground and air tests, with the ground-tests on the vehicles working at up to Mach 14 and the flight test focused on a free-flying scramjet at Mach 8.

The first free flight test for SCRAMSPACE was conducted in Norway but did not achieve the desired results.  The first stage rocket motor malfunctioned, which led to the test not being able to deliver the requisite hypersonic flight data.

The Aussies are building a number of hypersonic vehicles and doing ground tests on these vehicles and preparing for future flight tests as well.  Tests for the HIFiRE program are performed on an extraordinary test range, the Woomera Test Range, in South Australia.  This is a very large area where the vehicles can be recovered and then fully examined to determine their performance parameters.  It is not a well-instrumented range, but with proper funding could be.

The US hypersonics program needs a practical focus, as well as a funding and priority boost.

Partnering with Australia can boost the effort by providing for a best value partner, an effective test range, innovative thinking and capabilities from that partner, and an ability to provide that partner with capabilities which they themselves may either lack or would find prohibitively expensive to provide.

For example, if one wished to do a test replicating what the Chinese just did, it would cost 3-5 times more in the United States than in Australia. By building a solid working relationship and joint development, access to the Australian range would make sense for both sides and a more cost effective and capable result in a timely manner could be achieved.

After my visit I had a chance to discuss my findings with Dr. Mark Lewis, the former chief scientist of the USAF and a leading researcher in Hypersonics.

Dr. Lewis underscored the importance of boosting the partnership going forward for a number of reasons.

This is an important relationship because the Australians bring significant intellectual contributions to the table.

They also have important practical flight experience; we can even argue that they flew the very first flying scramjet under their HyShot program, which was a precursor to HiFIRE.

They have an extraordinary test range as well.

Much like the global F-35 would not exist without allies and partners, the effort to work with core partners on other 21st century capabilities is crucial as well.

There is none so more than a steadily and fully funded Australian-US partnership in hypersonics.

Editor’s Note: For a version of this piece which appeared in Space News please see the following: