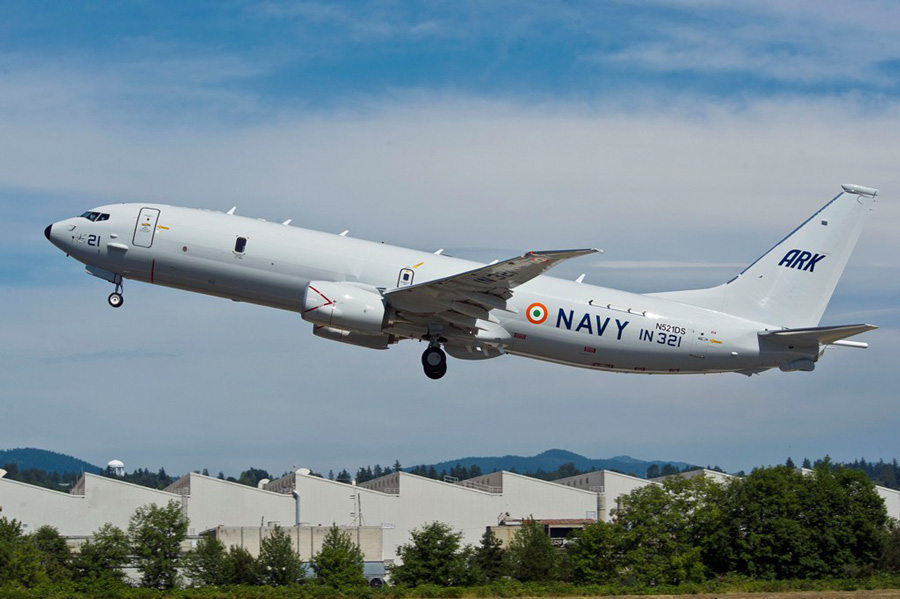 Vice Chief of the Naval Staff Vice Admiral Ajit Kumar P told India Strategic in an interaction that the Navy’s requirement is for 22 of these aircraft, and that the process to get them as part of the Navy’s Capital Acquisition programme is already under way. As for when, with procedural clearances down the line, their acquisition will fructify in due course.

It may be mentioned that in an interview with this writer in 2006, the then Chief of Naval Staff Admiral Arun Prakash had projected a figure of 30 Long Range Maritime Reconnaissance (LRMR) aircraft, but the figure as of now is 22.

It also has the Magnetic Anomaly Detection (MAD) radar to locate submarines under water in deep seas, and is regarded as a formidable, and perhaps the most advanced technological piece of military equipment, with any of the three Indian Services and has been used a couple of times by the Navy even to support land-based operations of the Army.

The aircraft’s radars are capable of providing high resolution images from 40,000 feet – the height at which commercial airlines fly – of undersea, over waters or land targets.

A militarized version of the Boeing 737 800ER commercial airliner, the Indian Navy P-8I variant has 360 degree coverage, thanks to its main Raytheon radar supplemented by an aft radar from the US Telephonics company. The US Navy does not use the aft radar as it has a global network of satellite and other aircraft to support its P-8 Poseidon operations.

Vice Admiral Ajit Kumar pointed out that for the time being, the eight aircraft already operational and are being exploited to maximum capacity.
The Indian Navy already has four more aircraft on order under the Options clause.

Interestingly, some women officers are part of the onboard crew manning eight target detection and acquisition systems, and if there is a contingency, it should perhaps be one of those ladies who will fire the first shots of torpedoes or Harpoon anti-shipping missiles.

Notably, India has a vast coastline of 7,500 km and accordingly a huge responsibility to maintain maritime security on not only its eastern and western seaboards but also deep down south in the Indian Ocean, and more P8-Is are needed. Understandably, “the Navy would like to give a repeat order although with upgraded technologies,” the distinguished Vice Admiral observed.

It may be recalled that the Government had decided to acquire this aircraft in early 2009, within a few months of Pakistan’s 26/11 terror attack on Mumbai in 2008. After negotiations, order, and delivery, it was commissioned in the Indian Navy on November 13, 2015 with the then Defence Minister Manohar Parrikar taking a flight from Port Blair to INS Rajali in Tamil Nadu, where it was inducted in Naval Air Squadron 312A.

The minister had said that the aircraft “will provide the Indian Navy the necessary reach and flexibility to undertake extensive surveillance as also to respond swiftly and effectively to contingencies in our areas of interest.”

Notably again, in view of the Mumbai terror attacks, in which nine Pakistanis massacred 174 persons and injured another 300 before being shot down or captured (one), the US Government had agreed to release the P8 technology to India, and New Delhi also became the first export customer. In fact, the Indian Navy got the P-8 technology in 2015, just about the same time as the US Navy (2013).

Besides Indians, the victims of that rabid attack included innocent US, European and other tourists staying at two prominent hotels in Mumbai.

According to the Indian Navy, the aircraft are fully integrated in naval operations. And that:

The P-8I aircraft is equipped for long range anti-submarine warfare, anti-surface warfare, intelligence, surveillance and reconnaissance in support of broad area, maritime and littoral operations. Its communication and sensor suite includes indigenous equipment developed by defence PSUs and private manufacturers. With its high speed and high endurance of about 10 hours, the aircraft is capable of thrusting a punitive response and maintaining a watch over India’s immediate and extended areas of interest.

This article was first published by our partner India Strategic in December 2018.